Charlie Liteky, a former Army chaplain and the only known recipient of the Medal of Honor to have ever returned... 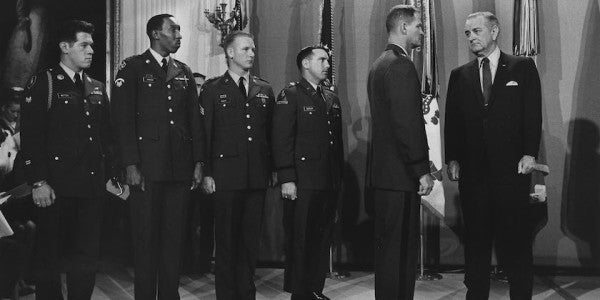 Liteky (second from right) receiving the Medal of Honor from President Lyndon B. Johnson on November 19, 1968 along with four fellow recipients.
SHARE

Charlie Liteky, a former Army chaplain and the only known recipient of the Medal of Honor to have ever returned the medal in a demonstration of political dissent, died on Jan. 20 in San Francisco several weeks after suffering a stroke. He was 85.

Having first gained national attention as a war hero credited with saving the lives of more than 20 wounded men during a fierce battle in South Vietnam, Liteky’s unlikely transformation into a peace activist and vociferous opponent of the Reagan administration’s policies in Central America made him a polarizing figure, especially among his fellow veterans. But if there’s one thing both his supporters and critics could agree upon, or at least not deny, it was that he was an extraordinarily brave man.

“When I look at Liteky, I have respect for the courage of his views,” Paul Bucha, a medal recipient and a past president of the Medal of Honor Society, told SFGate in 2000. “It’s difficult to be an iconoclast. It’s much easier to go along. Men like Liteky are people who should force us to pause and think, they should not be ostracized and criticized. They are entitled to their views, and perhaps if we listened we’d be better off.”

Liteky famously discarded his Medal of Honor, and the lifetime pension that went with it, in an act of protest soon after Judith Balch, a peace activist and former nun, introduced him to Central American refugees who’d been caught in the war between U.S.-backed right-wing militants, or Contras, and leftist guerillas.

In 1985, following a 47-day hunger strike near the Capitol against American involvement in that conflict, Liteky left his medal at the Vietnam War memorial on the National Mall, where it was collected by park officials and later delivered to the National Museum of American History.

“There were people who were angry with what he was doing,” a friend of Liteky’s later recalled. “I would watch him talk down and find some common ground. I was amazed at how peaceful he was.”

Liteky may have also held the distinction of being the only Medal of Honor recipient to ever spend time in federal prison. In 1990, Liteky was arrested for trespassing and civil disobedience at the Army’s School of the Americas at Fort Benning, Georgia, where he and other protesters splashed their own blood on the walls. (The school, which trained anti-communist soldiers from Latin America, is now called the Western Hemisphere Institute for Security Cooperation.)

Liteky served six months in prison following the Fort Benning incident. A decade later, in 2000, he was sentenced to one year in prison for a similar protest.

In 2001, Liteky wrote George W. Bush a letter imploring the president to avoid a violent response to the Sept. 11 terrorist attacks. “If we don’t stop, we’re just going to join in an unending cycle of violence, like an escalator that keeps going up and up and up,” he warned. Then, in 2003, Liteky and a group of fellow peace activists traveled to Baghdad to protest the looming U.S.-led invasion.

In a 2004 interview with NPR, Liteky said, “I am in deep sympathy will all those young men that are over there now doing what they think is their patriotic duty.”

Decades earlier, Liteky had been one of those patriotic young men. The son of a career Navy enlisted man, Liteky grew up mostly in Jacksonville, Florida. and became an Army chaplain in 1966, six years after being ordained a Catholic priest. Reflecting on his service in Vietnam, where he deployed twice, Liteky once said, “I was 100 percent behind going over there and putting those Communists in their place. I had no problem with that. I thought I was going there doing God’s work.”

On Dec. 6, 1967, Liteky was participating in a search and destroy mission near the village of Phuoc Lac in South Vietnam when his company came under intense fire from a Vietcong battalion. According to his Medal of Honor citation, the massive volume of fire forced the soldiers to hug the ground, and it was Liteky who was the first to jump into action, dashing to the aid of two wounded men who had fallen 15 meters from an enemy machine gun position.

“In a magnificent display of courage and leadership, Chaplain Liteky began moving upright through the enemy fire, administering last rites to the dying and evacuating the wounded,” reads Liteky’s citation. By the time the “savage” battle was over, a wounded Liteky had personally carried 23 men to the landing zone for evacuation, all while under heavy fire and without carrying a weapon. It was his first time in combat. The only two other chaplains to earn the Medal of Honor in Vietnam were awarded the medal posthumously.

In the decade before his death, Liteky had been working on a memoire, “Renunciation,” about his transformation from war hero to peace activist; although, he saw his achievements on the battlefield and in the anti-war movement as both being motivated by the same lifelong commitment to saving lives. Friends told SFGate that they expect the book to be published in the next few months.