Editor's note: This article discusses programs and services provided by the Headstrong Project, a non-profit offering treatment for post-traumatic stress... 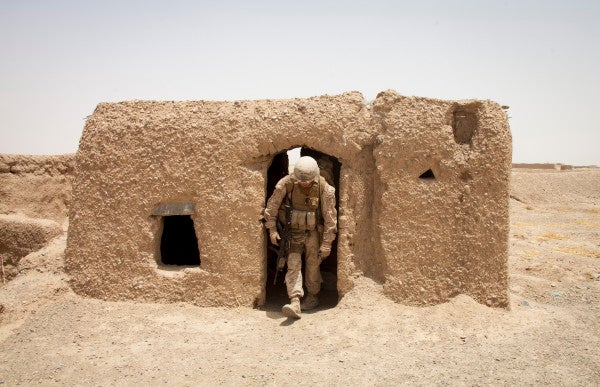 It was after the Sept. 11 terror attacks that I first felt an obligation to serve my country. It was the fall of my senior year and my high school in north Jersey had a clear line of sight to the Manhattan skyline.

However, it wasn’t until my senior year of college at Rutgers University that I began taking steps toward joining the military. That process that would eventually lead me to serve as an active-duty Marine Corps infantry officer from 2007-2012.

I was a part of a mission that was bigger than me and it felt awesome.

I deployed to Afghanistan with 1st Battalion, 5th Marines in 2009 and again in 2011. While my training prepared me for war, I was not prepared to handle the guilt I would feel over the injuries and lives lost under my command.

As I checked out my unit on Feb. 1, 2012, and prepared to leave the Marines for good, my machine gun section leader, Staff Sgt. Mark Gorzik, was on duty. Mark shook my hand, saying, “Sir, it was a real honor to have served with you. Let’s stay in touch.” Sadly, that was the last time that Mark and I spoke to one another in person.

In May 2013, Mark took his own life after dealing with the traumas of combat.

This was my first experience seeing the effects of post-traumatic stress in someone with whom I served. I was upset and angry and filled with guilt. As I left the Corps and made my way back to New Jersey, I was burnt out and filled with disappointment.

Fast forward to February 2014: I’m engaged, working full time in a sales role for a Fortune 500 company, and working toward my executive master’s of business administration at Rutgers. At a glance, my life was successful and I was a well-adjusted combat veteran.

However, I began to experience four symptoms of post-traumatic stress: massive headaches, choking sensations, night terrors, and anxiety attacks. I was in complete denial that these issues could be post-traumatic stress because I was an officer who did very few combat patrols that engaged directly with the enemy. What I did not realize at the time was that post-traumatic stress could result from guilt, and I had immense guilt over losing Marines like Mark and others on deployment.

What finally drove me to seek help was when I realized that if I drank alcohol I could suppress my symptoms. Fortunately, I realized I needed help before I began to develop a habit and after first going to the Department of Veterans Affairs for assistance, I decided not to seek treatment through them. I felt the VA was too quick to provide me with heavy doses of medication and it didn’t sit well with me.

Instead I went a different route, and I reached out to The Headstrong Project, which I first heard of during an annual gala in the spring of 2013. I went onto the website and filled out the basic information on myself: name, phone number, email, branch of service, where I deployed, and left basic comments on my symptoms. Twelve hours later, I was talking with a Headstrong clinician on the phone, and 72 hours later, I was seeing a psychiatrist for a proper evaluation.

I was diagnosed that day with post-traumatic stress and at the same time became overwhelmed with emotion because I thought I had to live with that diagnosis for the rest of my life. However, the Headstrong doctor explained that post-traumatic stress is an anxiety illness that is curable when treated correctly.

I started my therapy in June 2014 and attended 90-minute individual sessions with my therapist once a week. Then in September 2014, I began group therapy on top of my individual meetings. Every couple of months, my symptoms would decrease and eventually by December 2014 I was symptom free. I remember speaking with my therapist and saying, “We did it!” I said “we” because the entire time working with The Headstrong Project it was a team effort to get healthy. My therapist had to provide the correct treatment and I had to have the desire to follow the program Headstrong set for me.

It wasn’t until I went through seven months of therapy for post-traumatic stress disorder that I found work that would rival that sense of purpose I had in the Marine Corps. Now I’m serving my country in a different way. I have a mission again and it’s with The Headstrong Project, where I work as the director of strategic growth.

I look back at my life in 2014 and think it could have taken a much different path, one which easily could have ended in tragedy. The list of what “could have” happened doesn’t really end. What did end was my battle with post-traumatic stress thanks to the military trauma experts at The Headstrong Project.

I can not bring Mark Gorzik back to this life, but I can honor the names of all the men and women who took their lives due to their hidden wounds of war by continuing my work at The Headstrong Project.