How A Career In Emergency Medicine Saved My Life

If you watched “Act of Valor,” you no doubt remember the narration in the introduction that quotes Chief Tecumseh, “…Seek... 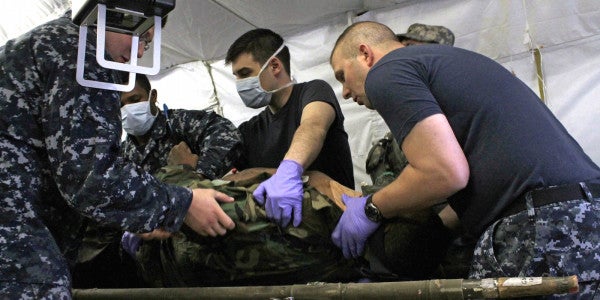 If you watched “Act of Valor,” you no doubt remember the narration in the introduction that quotes Chief Tecumseh, “…Seek to make your life long, and its purpose in the service of your people.” For those who feel like their chance to serve is over, is passed, and they no longer have any form of duty, I ask you: Who says service or duty ends after the military?

Life after the military can be one of the longest, hardest transitions you’ve ever known, from coping with combat stress to missing the camaraderie found among your brothers and sisters during a deployment. For me, I missed the high-stress work environment; I thrived in the moments where I had to own every millisecond of stress, knowing that a wrong move or poor decision meant catastrophic outcomes.

Before my end of active-duty service, I knew I had it all figured out. I was going to college and revisiting the talents I had in high school. I was going to major in music business and play guitar — end of story. By the end of my sophomore year, I was changing majors for the third time to graphic design. Eventually I got bored. What I needed was an adrenaline rush and a sense of duty. It was a deep-seeded need to find that rush and feeling of having a duty, which felt almost as essential as having air to breathe. I fought with re-enlisting, studying counterterrorism, and even tested for the police force in my home town. Eventually I found a career that gave me hope. It fueled my desire for adrenaline, gave me a new uniform, and ultimately an entirely new duty. I had signed up for an emergency medical technician course at my local community college.

Filling out the online application for a class that leads to a healthcare career in emergency medicine can have such a positive impact on your life. The Navy had prepared me more than I knew to get started and succeed as an EMT; I already knew about trauma patients and splinting from qualifications I pursued while I was active duty. Any veteran who has completed combat MOS training will find this skill set very useful in the coursework. We’re able to overcome tense scenarios and rise up to the tasks at hand during moments when a person’s life could ultimately be forever changed. Not everyone can make life or death decisions in a cramped, cabin mounted to a medium-duty truck frame armed with a handful of medications, an oxygen tank, and a narrow-band, two-way radio in a short transit, but this is a skill set in which most vets are well versed.

It’s easy to realize once you have a national certification and medical license in hand that a plethora of options to climb the healthcare ladder are at your fingertips. Working as an EMT puts veterans back in uniform and rekindles the sense of duty that the military instilled in us. We find peace and focus living among the chaos, often times more than our time on active duty. This is nothing short of miraculous for those who struggle with transition. I still say emergency medicine saved my life.

My first job landed me in a small rural hospital’s emergency department, where cardiac arrests and trauma patients made the adrenaline flow freely; the rush felt incredible and was easily repeated with the next call from dispatch. I continued to pursue growth opportunities and expand my knowledge base and certifications, eventually landing a job at a level-one trauma center.

In emergency medicine, the opportunities for jobs and advancement are endless. You’ll only find yourself limited by your own motivation and willingness to learn. I took paramedic classes after EMT Basic. Others can finish an undergraduate degree, then pursue emergency nursing, and continue on to become a nurse practitioner. If you’re the type who prefers to stay on the streets, the option of pursuing paramedic licensure that could lead to exciting opportunities as a flight paramedic or licensure as a critical care ground medic are there as well.

You could also go into remote medicine and travel to various islands or jungles, working with camera crews or adventuring on safaris. If going back to the sandbox and making tax-free dollars working for private military companies were something you’d consider, you could be a medic for those private sector security agencies. Many paramedics seek out jobs with municipal fire departments, many of which list paramedic licensure as a prerequisite to even test, thinning out the applicant pool to only the most devoted and qualified people they can find. As a bonus, most city governments award additional points to veterans on these exams, giving you a solid lead on other candidates.

For those looking for an easy path, I can assure you emergency medicine is not the way to go. Emergency medicine programs are often very selective and require what seem to be mundane prerequisite coursework that will ultimately build an essential framework of skills that will set you up for success. Paramedic and nursing programs are often highly demanding and extremely competitive, allowing zero tolerance for people who aren’t aggressive with pursuing clinical hours. Only the most motivated self-starters are the ones who find success; it requires the mental grit to dedicate your mind to learning biology and understanding how medications, street drugs, lifestyle choices, and pathology all intertwine into what ultimately comprises modern medicine. You’ll also find that some programs have arbitrary rules and regulations that remind you of the silliest details of boot camp. The more suffering you endure along the way, the more you’ll find yourself dedicated to the cause of being among the best.

Emergency medicine is a profession in service to people who don’t understand why things are done in a certain order. There are few times you’ll be thanked by the people you serve, and even less moments you feel they’re sincere, and at the end of the day, it doesn’t matter. When you force yourself past the normal person’s breaking point — the point where they shiver, freeze in their tracks, and shout, “Nope, just nope” — you find the mythical “purpose.” These come in the moments that you were there when someone needed you the most, broken and bloodied, trapped in their crumpled car, gasping to breath, and fearing for their lives; the moments that you keep someone alive, or the statistical rarity of bringing them back from the realm of the dead. Those very moments will define every ounce of job satisfaction you could ever be looking for.