What Becoming A Parent Taught Me About Leadership 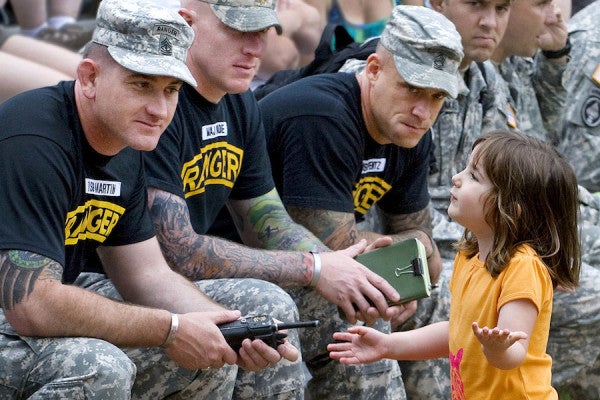 In a recent post, I revealed a few of the ways in which I thought becoming a parent would change me. I anticipated the obvious, like that a new baby would transform my daily routine and thrust me out of my comfort zone, and that I would instantly become a persistent example of right and wrong to this little being. I predicted that having a child would also influence how I interact with soldiers and perform as a leader.

Turns out, I was only scratching the surface of lessons that parenthood can teach a leader. Here are some of the lessons that I have taken away from my experiences as a new parent.

Show empathy: As a leader in multiple organizations, I’ve helped plenty of soldiers navigate family difficulties, but having children brought an acute awareness to the challenges that exist of raising a family while serving in the military. I simply could not comprehend the experience until I lived it myself. Family problems grab a soldier’s attention like nothing else and will continue to distract him/her from the mission until resolved. Family challenges also impact soldier resilience, which is already tough to maintain given the daily job requirements and deployments. As a leader, I’ve learned to surge assets to help a soldier with family problems.

Lesson: Understand that family is priority for everyone. Don’t discard a subordinate’s problem as minor because it wouldn’t be a big deal for your family. Give them the benefit of the doubt, the assistance, and the freedom to solve the problem. That’s what leaders do.

Value family time: It was easy to stay late at the office when there was no one waiting at home. I actually equated long work hours with productivity, sacrifice, and admirable work ethic. Now, long work hours mean missing out on quality moments that are irreplaceable. After having children, I get edgy toward the late afternoon because I want to be at home with my girls. Thankfully for the folks I’m leading, this anxiousness usually overcomes me and I just leave the office, which means that they can leave the office, too. I also have an appreciation for followers who ask to take time for family events.

Lesson: There’s not a lot of routine work that should keep you late. Stop pretending that working late is a badge of honor and commit to being more productive within reasonable work hours.

Include single soldiers: Having children made me realize how many military programs and events are oriented toward families and not single service members. It’s not intentional; it’s just that the majority of military leaders have families and many have forgotten what it’s like to be single. I recently had a commander who made sure to include activities for single soldiers in every unit event and campaigned for them to attend.

Lesson: It’s not the leader’s job to give every subordinate something to do, but it is a leader’s job to provide equal opportunity across the ranks, which will build cohesion.

Get your affairs in order: After children, my wife and I found an urgency to get our administrative affairs straight. We updated our wills and selected a designated guardian in case something happened to both of us. And we ensured that our life insurance policies were accurate. After this process, I paid more attention to how my soldiers were handling their affairs and engaged them to ensure they weren’t pencil-whipping deployment documents like wills and next-of-kin notification documents. It paid off, as I found that many soldiers had outdated or incorrect information and hadn’t taken the time to consider some of these serious topics.

Lesson: No one likes to do the administrivia of life. Taking care of followers means helping them do the things they should be doing — that goes for official and unofficial business.

Pick your battles: My toddlers teach me this lesson every day. There is plenty that they do that I don’t like, but trying to reason my way through a tantrum is hopeless. So, my wife and I do a lot of ignoring. We prevent dangerous acts and correct mean behavior or disobedience, but the rest we let go. The connection to organizational leadership is clear, but I didn’t understand this lesson until I had to live it at home.

Lesson: Not every problem deserves your attention. The most efficient way of solving problems might not be the most effective way. Subordinates can learn a lot from having the freedom to figure out problems on their own. Avoid the temptation to rush in and fix everything.

Plan ahead: My wife would say that I have a long way to go with this lesson, but having children has shown me that everything takes five times as long as I think it will and if we want to get out the door at 9 am, we have to start getting ready two hours early. (Funny how Clausewitz’ lesson on friction reveals itself at home on a Saturday morning.) This reality has had a direct impact on how I plan operational timelines and anticipate friction. It also showed me that preparations and rehearsals are essential for a successful event.

Lesson: Leaders cannot expect an organization to turn on a dime or effectively make their own plans on short-notice. Give them more time than you think they’ll need, even if that means shorting your own staff of its planning time.

Don’t forget to teach the basics: It’s amazing how clear this lesson becomes when you’ve got a person in your life who knows absolutely nothing about anything. Having to teach a little girl to use a fork has taught me that even the most rudimentary lessons are appreciated by someone. New soldiers/officers may enter service with zeal and motivation, but they have no real-world experience and rely on leaders to provide a working knowledge of the profession.

Lesson: As leaders progress in rank and responsibility, they take more and more skills for granted. Reach back to old lessons and pass those on to the younger generation, they need to hear it.

Clarify your communication: While I am incredibly thankful for them, my two daughters brought some noise and chaos to the home. I’ve found that it’s become very easy for my wife and I to talk right past each other, saying plenty, but not communicating. (I’ll admit that I’m always working on my listening skills.) Sometimes we have to physically get each other’s attention to get a point across. It’s not unlike trying to share information in the midst of a combat event, where the abundance of distractions make for a short attention span and limited comprehension.

Lesson: Identify the moments that require clear communication and emplace protocols to ensure the right people get the information they need. Leaders must protect their ability to remain above the fray and provide perspective during chaos.

Make time for reflection and personal growth: Being slightly introverted, I used to recharge my mental batteries reading a book in the anonymity of a Starbucks. Unplugging from the daily commitments changed my perspective and facilitated problem solving and insight. But with the flood of activities and responsibilities that accompany children, “quiet time” seems like a distant memory. The transition showed me that reflective time is crucial for personal and professional growth, which is non-negotiable for a leader. If I wanted it to happen, I needed to make quiet time a priority and carve out the space for it. For me, the five-o’clock hour is where I get my reading and writing done, which means I’ve had to get to bed earlier. But if I don’t find this time, I won’t grow, which means those I lead won’t grow.

Lesson: Children bring plenty of reasons to devalue the recovery and personal growth that comes with quiet time. Leaders, however, have a mandate to grow. Find a balance that sets the conditions for your personal development and teach those around you to do the same.

Make time for physical fitness: The same goes for your health. Kids can steal the time you once had to workout and you won’t notice it until 40 pounds later. And the military doesn’t give you a pass on fitness because you have kids now.

“This is harder than Ranger School…”: Five days after the birth of our second child, at about 3:30am, I actually muttered this confession to my wife. The constant responsibility and two-hour feeding schedule had broken me worse than any rucksack ever did.