Editor’s note: The following story of purpose and perseverance highlights a veteran who works at Epicor. Committed to filling its... 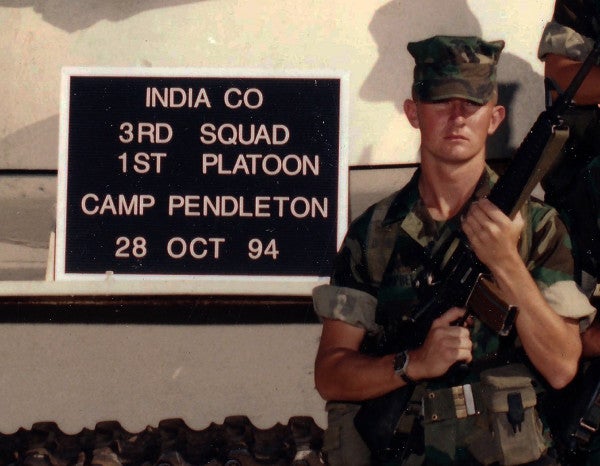 Editor’s note: The following story of purpose and perseverance highlights a veteran who works at Epicor. Committed to filling its ranks with talented members of the military community, Epicor is a Hirepurpose client. Learn more here.

A little more than 10 years ago, Jason Campbell was sleeping in a park in central Texas. He was drinking heavily, had been laid off of his job, and his wife had left him, taking their three young children.

“I made a lot of bad choices,” he recently told Task & Purpose. “Looking back, I’m really glad it happened. It changed who I was.”

But Campbell’s life hadn’t always been a series of bad choices. In 1994, Campbell enlisted in the U.S. Marine Corps straight out of high school.

“I had family on both sides serve in the military going a long way back, but no one served in the Marines,” he said. “My recruiter met me on the field after the graduation ceremony and said, ‘We’re leaving tomorrow.’”

“It was four months of hell and it was grueling, but I enjoyed it,” Campbell said. “I was a typical 18-year-old. I liked to run in the sand and shoot guns.”

An infantryman, Campbell completed tours in Japan, the Philippines, Singapore and Mogadishu, Somalia.

Faced with a reduction of force in the mid-1990s, Campbell said he accepted an offer to join the reserves and retire with full benefits after serving three years on active duty.

“I was looking forward to retiring out of the Marines,” he said.

But in the civilian world, he could only find low-paying warehouse work.

“I regretted the decision to leave the Marines,” he said. “I hadn’t realized all the good things the Marines instilled in me, like the good sense of being prepared and taking action.”

Campbell said he began partying and drinking. By the early 2000s, Campbell found himself with nothing.

“I took a long look at my life and thought about the lessons the Marines taught me — determination and perseverance,” he said. “I told myself, ‘I’m going to embody that.’”

He began reading self-improvement books including “Unlimited Power” by Anthony Robbins, “Rich Dad Poor Dad” by Robert T. Kiyosaki, and the Bible. He found a place where he could check email, build his resume and apply to jobs. He joined a local gym with a low-cost membership rate where he could shower and use laundry facilities.

Eventually he got an interview and then a well-paying job. He went back to college, earning a degree in computer science. He reconnected with his wife and got his family back.

Now, he works as a senior consultant for Epicor, a business software company based in Austin.

He pays his success forward to the homeless veteran community he was once a part of.

“A lot of these guys are Vietnam vets. It’s really hard to help those guys,” he said. “The best we can do is go down there, feed them and make sure they have a warm sleeping bag and warm clothes.”

His advice to other homeless veterans: Don’t give up.

“Learn to persevere and succeed with what you have,” he said. “I’m glad for the journey and thankful God got me through it.”