Leading The Way: Air Force Offering 3 Years Off To Airmen To Start Families

I knew that one day I would want to have children. I babysat my nieces and nephews frequently and I... 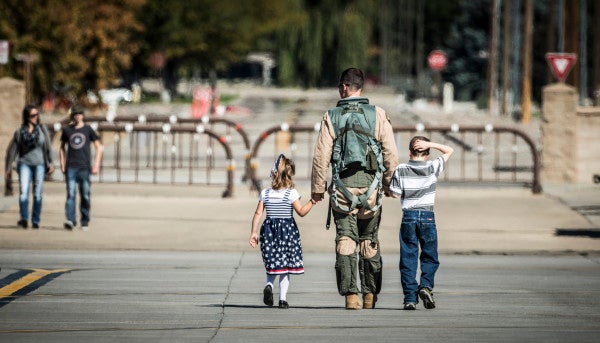 I knew that one day I would want to have children. I babysat my nieces and nephews frequently and I have always found such joy in being with children. So even before I served in the U.S. Army, I knew I wanted to be a mom as well as something more than a soldier.

While serving, I witnessed my fellow soldiers leave their children behind when they got the call to serve their country overseas. I can remember one of the staff sergeants I worked with yelling at me not to drive like a maniac because he had a new baby girl at home that he needed to get back to. Now, as a mom of two I could never imagine having to leave Donovan and Camryn when they were so little.

When people think of the military they don’t often think of transformation or thought leaders. They think action, decisiveness, guts, pride, and honor. However, time-and-time again, the military demonstrates that they are both.

The military recognizes same-sex marriage, the Navy has the technology to transform salt water into fuel, and the Air Force is planning to launch a pilot program, for 20 officer and enlisted airmen, later this year that will allow them to temporarily leave the service to start a family and return up to three years later.

The military has led the way with racial integration, women in the workforce, pay equality, and now is a proving ground for maternity and paternity leave.

At 23, when I had my first child, my maternity leave consisted of what was allowed by the Family Medical Leave Act and what I could afford as a young mother. This act states that companies that employ over 50 people must allow their employees 12 weeks of unpaid, job-protected leave per year. My employers invested a lot in me, trained me on their processes, and held my job because they knew when I returned that I would continue to be an asset to their organization.

This pilot program offered by the Air Force would be open to both male and female airmen who want “to meet personal or professional needs outside the service while providing a mechanism for seamless return to active duty.” So this extends beyond maternity and paternity leave.

Want a law degree or to advance your nursing degree? Fine. Want to apply your military skills to the private sector while gaining knowledge from leaders in that world? Go ahead. Want the opportunity to provide a thriving environment to a child in some of the most critical years of their learning? Well then, the Air Force sees value in that, too. And when you complete your life-advancing journey, the Air Force wants you back because it realizes what it means to make it a better force for protecting our national security.

Those top performing airmen who qualify for this program and wish to participate, enter into a signed agreement under which they agree to serve on active duty for a period of two months for every one month of program participation following completion of program. This time is in addition to any remaining commitment the airmen have to the Air Force.

I was 18 when I enlisted; young and ready to take on the world. I enjoyed my time in the military and there is not a day that goes by in which I don’t take pride in my service. I learned a great deal and obtained an amazing hands-on education. If I had the opportunity to pursue some of my personal goals through an opportunity such this one being offered by the Air Force, maybe there is a chance I would have taken it and then gone back to the Army as a soldier of greater well-being.

The civilian sector can once again learn a lesson from the military that investing in employee growth is more than what employees provide to us day in and day out; whether in the office or on the battlefield. It is the passion that drives them to be all they can be, or to raise the family they always wanted, that makes them more passionate and better employees. The military continues to create a culture in which the talents of each individual is maximized to their fullest potential. And without reservation, I predict our military will continue to be the greatest fighting force in the world for that very reason.