Samuel Cooper was one of the first to fight in the Revolutionary War. When he was commissioned as a colonial... 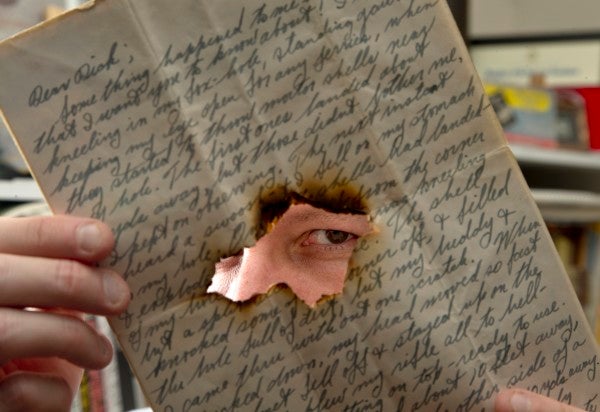 Samuel Cooper was one of the first to fight in the Revolutionary War. When he was commissioned as a colonial officer in 1774, the Declaration of Independence had not yet been written. He was serving the British Crown as a second lieutenant out of Connecticut.

With the colonies starting to splinter after Lexington and Concord, Cooper ended up commanding a militia stationed at the Roxbury township outside Boston.

Related: A glimpse at humanity in the War of 1812.

He wrote home to his wife about a month after his unit set up camp. There was little information to share, but he already dreamt of the war's end: “I cant [sic] tell when I shall come home but I have of coming in about a month but not Certain.”

Cooper writes exactly as many of us have when we were deployed. There is no detail about the life, no sense of his daily struggles or concerns, just a father who wants his wife to be strong and his children to be healthy: “John is fat & Rugged which I Rejoice to hear & Prize above gold.”

As in every camp, uniform items were scarce and it was every man for himself. Cooper had been screwed over by some of his buddies (Revolutionary War precursors of the modern-day Blue Falcon), forcing him to write his wife: “Send me two Pair of Linen Stockings for I have had two Pair Stole The Rest are all wore out.”

You won't find anything about the implications of fighting against soldiers who were their friends a few months before. Cooper was no strategist or politician. He left that to others who were forced away from the fight by age, cowardice, or circumstance.

Death hovered over Cooper, forcing him to clarify what example he wanted to set. “The Dangers we are to Encounter I not but it Shall never be Said to my Children your father was a Coward.” Many soldiers, despite their youth, have written similar words to those they knew they may leave behind.

This letter is just one of thousands from that war, and from the tens or hundreds of thousands over America's long life. Its themes should resonate with those of us who fought in recent memory. The mundane and the patriotic, the father and the warrior, stacked uncomfortably against each other in a simple note home from the front