How To Pack The Ultimate Care Package

Imagine you’re a soldier deployed to a war zone. Your days are long and grueling. When you’re not pulling guard... 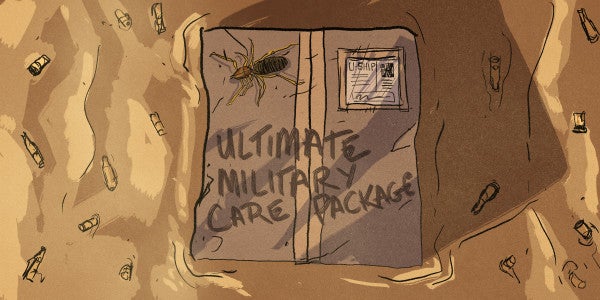 Imagine you’re a soldier deployed to a war zone. Your days are long and grueling. When you’re not pulling guard duty or bouncing down IED-riddled roads in the back of a mine-resistant vehicle like a Mexican jumping bean, you’re humping ungodly amounts of gear in 110-degree heat.

Then one day a care package with your name on it arrives out of the blue. You think, “Maybe life isn’t so bad, after all.”

You rip open the package as fast as you can. Surprise: It’s a box full of Jolly Ranchers and a picture of a soldier drawn by a 4-year-old kid. It says, “Thankkz 4 killing the bad guyz Mr. Army man,” in red crayon.

Your heart sinks into your stomach like a stone. The suck continues.

That, of course, is not the response we’re hoping for when we send care packages to troops serving overseas. But packing the ultimate care package requires a realistic understanding of what deployed soldiers want and need.

Don’t worry. We’ve got you covered.

For deployed soldiers, tobacco isn’t just a substance that’s consumed to satisfy an incredibly dangerous addiction. It’s currency. In war, like in prison, one pack/can of tobacco carries roughly the same purchasing power as $50–$75 in a civilian setting. We therefore suggest packing at least one log of dip and one carton of smokes. This will give your soldier the clout he or she will need to avoid shit-burning detail for a few glorious weeks.

Related: The ex-military buddies all veterans have »

Mention Rip-Its or Wild Tiger to someone who’s deployed and watch their eyes light up in gleeful recognition. But 5-Hour Energy boasts one important feature those other two energy drinks don’t: You can carry lots of it on patrol. This is important when you haven’t slept in 48 hours and the only way to prevent slipping into a coma is to keep the caffeine flowing nonstop.

This is a no-brainer. Unlike candy bars, gummy bears, or grandma’s famous chocolate cupcake balls, beef jerky doesn’t melt in the heat. In fact, the longer it sits in your pocket, the better it tastes. We recommend avoiding the cheap stuff. Real, quality jerky — like the stuff you buy at those little redneck stands on the side of the highway — is the filet mignon of war.

You know that feeling after you’ve just spent a day at the spa? Your skin is soft and smooth; your mood is light; your soul is pure. That’s how soldiers feel after they use a baby wipe to cleanse themselves of a week’s worth of filth, grime, and bodily fluids. It’s like a beautiful butterfly emerging from its cocoon.

Good oral hygiene is the key to preventing cavities, the gum disease known as gingivitis, and bad breath. The regular use of an antiseptic mouthwash is especially important in the field, where the constant consumption of MREs, which are high in sugar, can quickly transform a soldier’s mouth into a festering cesspool of germs. (Seriously, though, replace the Listerine with booze.)

Update: A recommendation of including flea collars was removed from this article due to research that flea collars are damaging to soldiers' health. (Updated 10/6/2017; 1:58 pm)