Keep It Simple, Stupid. How To Make Good Food With 3 Tools

A lot of recently separated veterans or junior service members have spent years living out of an olive drab seabag.... 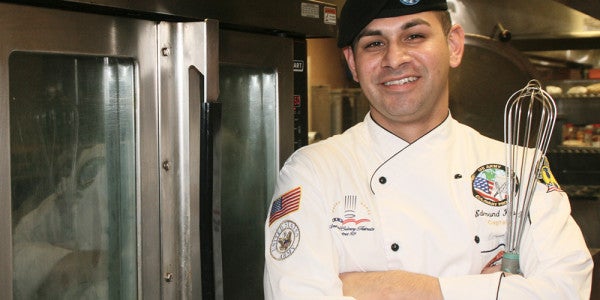 A lot of recently separated veterans or junior service members have spent years living out of an olive drab seabag. It’s unlikely that you’ve acquired a full kitchen set by the time you finally move into your own apartment off base or out in the civilian world.

As you step into your new kitchen, wearing your big boy pants, ready to be “an adult” and stop eating at the chow hall, you realize the only cutting tool you have is a blunt butter knife and instead of a spatula, you’ve got a soup spoon.

If you’re starting from scratch you’ll need to invest in some good cookware. To find out what tools you need, Task & Purpose spoke with Warrant Officer Edmund Perez, an Army chef and a former host of the Pentagon Channel’s cooking program “Grill Sergeants.”

Related: A survival guide to the best and worst MREs »

Perez, who has been cooking for the Army for 15 years, laid out three basic tools you’ll want on hand, and what you can do with them.

Your first item: A chef’s knife.

“There are various knives you can use,” said Perez. “There’s a boning knife, a vegetable knife, a paring knife, a turning knife, there’s all kinds of knives. A chef's knife is designed to do all of that stuff.”

If you’re starting from scratch, a chef’s knife is a good first pick.

“I can use it to do multiple things,” said Perez, explaining that you can use this one knife in lieu of the others. “It’s kind of a multipurpose tool.”

Next, you want a saute pan.

“A good saute pan will take you far,” said Perez, explaining that you can get more mileage out of a saute pan than you will out of a pot.

For example, you don’t need a deep pot to cook pasta or spaghetti, you can do it in a saute pan, you just need to know how.

“In a saute pan, if you’re cooking for one or two, you can fit enough noodles in that pan, and boil the water, then you drain it set it to the side and use that same pan and saute some vegetables, add some tomato sauce, and using that one pan you’ve done three or four items” explained Perez.

Finally, you want a pair of chef’s tongs.

With your chef’s knife and saute pan you can cut and cook, but you need something to turn over your food.

“You can hold your meat in place, you can turn your meat, cut your meat, and some are wide enough that you can use them for scooping or if you have some noodles you can twist them into different shapes,” said Perez, who added, “Again, a versatile tool, chef’s tweezers.”

Now, here’s what can you make with a chef’s knife, a saute pan, and a pair of chef’s tongs.

Next, you start on the main course: Pasta.

Bring your water to a boil and add your pasta. Perez said he prefers angel hair.

“While the pasta's cooking, I can dice up some more veg and then strain the pasta out and kind of set it to the side, saute my veg in the same pan and I can do carrots, I can do peppers, I can do artichoke, tomato, saute all that up in the same pan, add a little heavy cream and a little butter, little parmesan cheese and some vegetable sauce and add the cheesy base to it. Take that out, set it to the side.”

Now it’s time for your meat, in this case, chicken.

“Throw some chicken breast in the pan, cook it off, then when it’s cooked, set it to the side, give it a little slice, add all that back into the pan — the noodles, the vegetable sauce, the chicken breast — give it a good toss and serve it up,” explained Perez.

With just three tools, you’ve got a full meal.