The U.S. government is turning its back on one of the most significant international climate change accords in modern history... 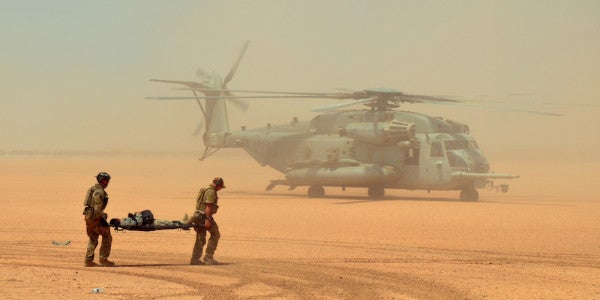 The U.S. government is turning its back on one of the most significant international climate change accords in modern history — and it’s only going to end up hurting the Department of Defense.

President Donald Trump absolutely plans on withdrawing the U.S. from the Paris Agreement, several White House officials told Axios on May 31. The non-binding treaty, established during a landmark climate change summit in 2015, requires signatories to undertake “rapid reductions” in greenhouse gas emissions — which, in the case of the U.S., means instituting domestic regulations that will bring economy-wide emissions to below 2005 levels over the next decade.

During his 2016 presidential campaign, Trump painted the deal as a burden on U.S. economic growth and job creation (a claim both Republicans and major corporations have questioned), and both foreign and domestic political leaders fear the agreement will collapse entirely without the support of a global emissions leader like the U.S.

But European dignitaries and tree-hugging hippies aren’t the only people worried about climate change. For the last several years, the Pentagon has emphasized to lawmakers and political leaders who often split along political lines that that global climate change represents a critical threat to U.S. national security by creating and aggravating second-order threats — including “poverty, social tensions, environmental degradation, ineffectual leadership and weak political institutions,” per a 2015 DoD report — that could destabilize the geopolitical order and feed the rise of terror organizations like al Qaeda and ISIS.

Among the immediate concerns facing the Pentagon, according to the DoD’s 2014 Quadrennial Defense Review: increased economic competition over scarce resources, meteorological and environmental burdens on global military infrastructure like overseas bases and other installations, and sociopolitical instability in nations, like India and Pakistan, that boast nuclear arsenals but lack simple water security:

As greenhouse gas emissions increase, sea levels are rising, average global temperatures are increasing, and severe weather patterns are accelerating. These changes, coupled with other global dynamics, including growing, urbanizing, more affluent populations, and substantial economic growth in India, China, Brazil, and other nations, will devastate homes, land, and infrastructure. Climate change may exacerbate water scarcity and lead to sharp increases in food costs. The pressures caused by climate change will influence resource competition while placing additional burdens on economies, societies, and governance institutions around the world. These effects are threat multipliers that will aggravate stressors abroad such as poverty, environmental degradation, political instability, and social tensions – conditions that can enable terrorist activity and other forms of violence.

Secretary of Defense James Mattis himself, in unpublished testimony to the Senate Armed Services Committee shortly following his confirmation hearing in January, affirmed the Pentagon’s position that climate change will exacerbate strategic and operational threats abroad and, over time, put American troops in harm’s way.

“Climate change is impacting stability in areas of the world where our troops are operating today,” Mattis said at the time. “It is appropriate for the Combatant Commands to incorporate drivers of instability that impact the security environment in their areas into their planning.

“The effects of a changing climate — such as increased maritime access to the Arctic, rising sea levels, desertification, among others — impact our security situation,” he added. “I will ensure that the department continues to be prepared to conduct operations today and in the future, and that we are prepared to address the effects of a changing climate on our threat assessments, resources, and readiness.”

When reached for comment regarding the government’s withdrawal from the Paris Agreement, Pentagon public affairs officials referred Task & Purpose to the White House National Security Council