The Pentagon Has A 3-Part Plan To Beat Climate Change. Here’s What’s Missing

The Department of Defense released what it is calling a “Climate Change Adaptation Roadmap” on Monday; a guide on how... 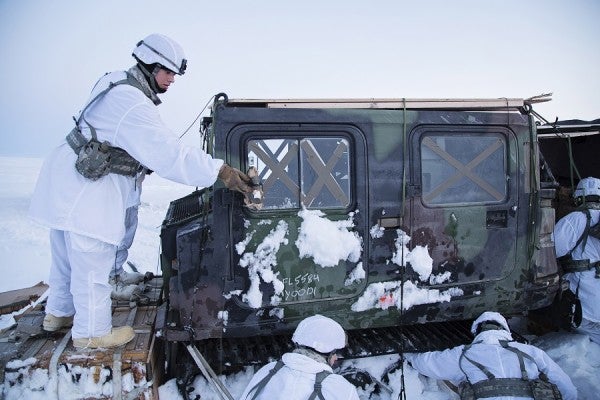 The Department of Defense released what it is calling a “Climate Change Adaptation Roadmap” on Monday; a guide on how it hopes to ready the military establishment for the effects of global climate change. The report lists three specific goals the Pentagon see as crucial to the process.

First, any specific effects that climate change will induce on the defense department are to be identified and assessed. The Pentagon provides a remarkably broad set of examples; from the obvious, like rising seas levels affecting America’s coastal military infrastructure; to the more indirect, such as an increased operations tempo due to a rise in global instability caused by climate change.

In the document's foreword, Secretary of Defense Chuck Hagel called the effects of climate change a “threat multiplier,” stating that they would precipitate greater chaos in already unstable nation. In remarks from a conference on climate in Chile, Hagel posited that climate change could take the United States into a Arctic battle over resources:

We see an Arctic that is melting, meaning that most likely a new sea lane will emerge… We know that there are significant minerals and natural deposits of oil and natural gas there. That means that nations will compete for those natural resources.

Responding to increasing global competition, the Arctic will require increased sea, air and land capabilities, and building those capabilities will required facilities, equipment and training more suited to cold weather climates. Last year, the Pentagon released its Arctic Strategy, outlining the military commitment to preserving peaceful access and navigation to the Arctic.

The second goal is to integrate the considerations developed throughout the first goal milestone into planning and training throughout the defense department; there have already been several ongoing efforts to accomplish this, from revamping installation defense against wildfires to adopting new risk management strategies. There are also plans to review and revise field manuals and other documentation to reflect new policies on climate change. Further, the Pentagon wants to conduct war games and simulations that demonstrate the effects of climate change on military operations.

The third and final goal involves the Pentagon working with outside stakeholders: other federal agencies, communities, and private corporations that are also working to prepare for the effects of climate change. Whether it’s looking to improve the climate resiliency of equipment, or coordinate better weather-related disaster response, the defense department clearly recognizes the need to work closely and deliberately with external groups.

While the Pentagon’s climate change roadmap provides a clear understanding of the goals and process required to prepare for climate change, it lacks two crucial points.

The first is sustainability; there is little to no mention of planning or programs designed to lower the environmental impact of the defense department and provide better clean solutions for military tasks.

These types of programs do exist, such as the Air Force’s biofuels program or the military-wide move to purchase electric vehicles, and the provide examples of sustainable technologies the Pentagon can use help mitigate climate change.

Secondly, the report lacks a definitive timeline on when it expects to meet the various milestones it has created; given the magnitude of the task, a better estimate of how long this preparation process will take is needed.