The Navy honored former president George H.W. Bush, who died Sunday at 94, with one of the notable tributes in... 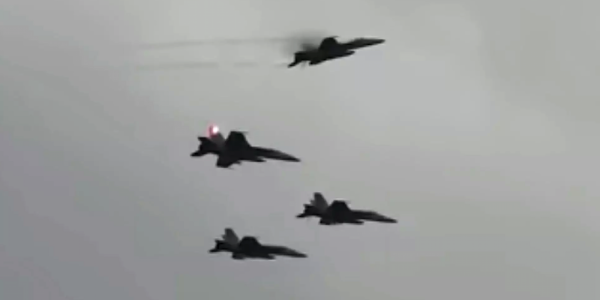 The Navy honored former president George H.W. Bush, who died Sunday at 94, with one of the notable tributes in its history: an unprecedented 21-jet flyover.

A team of 21 Navy F/A-18 Hornets conducted the memorial flyover, the so-called “missing man” formation that entered military protocol at the end of the Korean War, just as the former president and Navy veteran's casket was escorted onto the grounds of the George H.W. Bush Presidential Library and Museum in College Station, Texas, by a military honor guard.

Bush enlisted in the U.S. Naval Reserve on his 18th birthday, six months after the Japanese attack on Pearl Harbor, and eventually became one of the youngest aviators in the Navy.

The flyover included naval aviators from various squadrons assigned to Commander, Strike Fighter Wing Atlantic and Commander, Naval Air Force Atlantic, according to the Navy release, which notes that 30 jets were sent to Joint Reserve Base Fort Worth in addition to the ground team for the flyover as backups “to ensure mission success.”

According to the Cmdr. Justin Rubino, who served as the forward air controller on the ground to ensure the timing of the flyover matched the movement of the honor guard on the ground, this particular flyover wasn't just special because of its size and complexity, but because of Bush's legacy as a Navy aviator.

“He flew off aircraft carriers just like we do today and that’s a bond all of us share,” Rubino said in a news release. “He’s one of us. Sure he was the president of the United States, yes, but he was also a naval aviator.”

SEE ALSO: Watch George H.W. Bush’s Rescue By The US Navy After He Was Shot Down By Japanese Forces During WWII