A matter of life and death: How this crew chief kept the planes flying during the Kabul evacuation 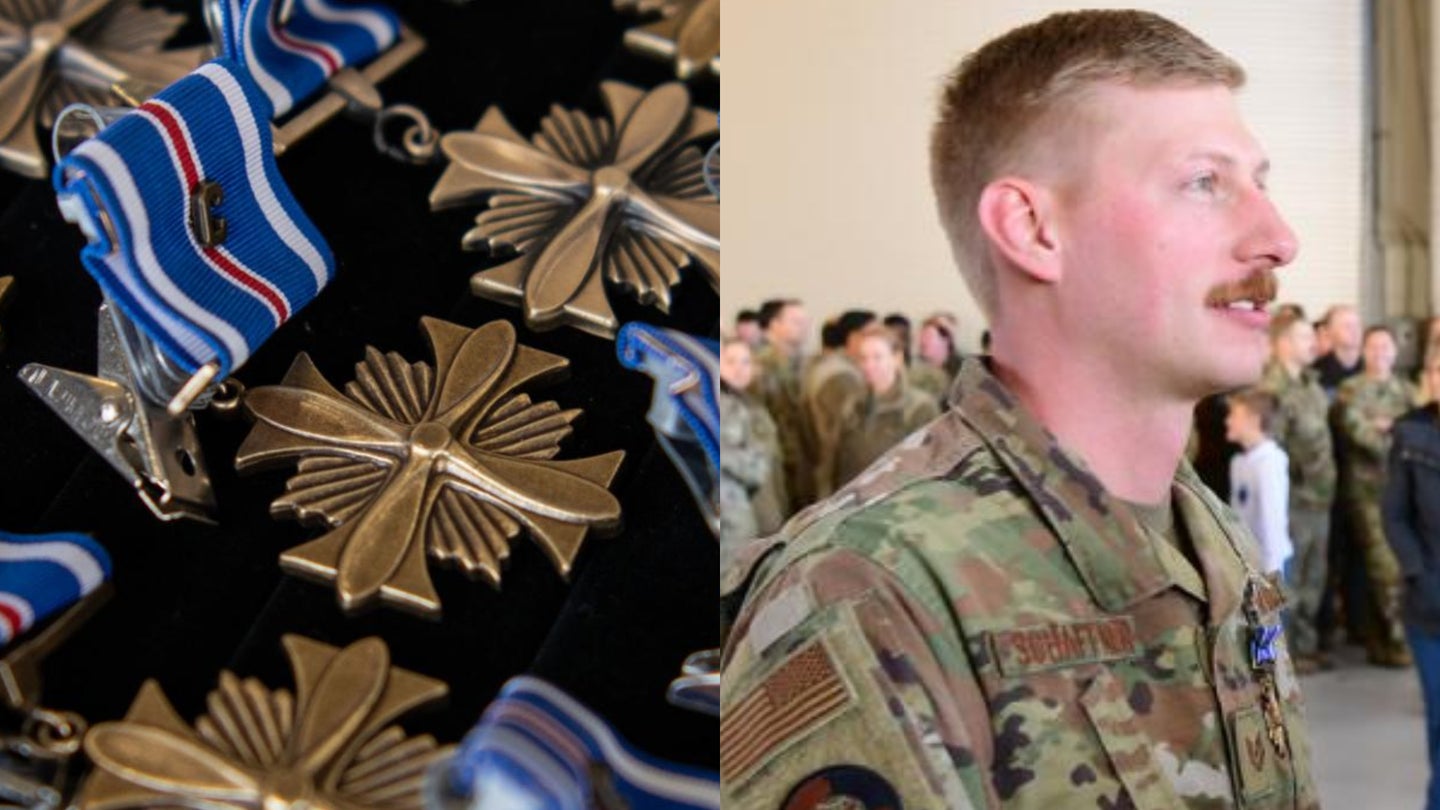 Fifty-one airmen at Joint Base Charleston, South Carolina received one of the most prestigious awards in the Air Force on Monday in recognition of their performance during Operation Allies Refuge, the mission where coalition forces and civilian partners evacuated more than 124,000 people from Afghanistan before the U.S. military fully withdrew from the country on Aug. 30, 2021.

Among the 51 Distinguished Flying Cross recipients was Tech Sgt. Ethan Schaffner, whose job as a flying crew chief was to ride on a C-17 transport jet and address any mechanical problems that came up mid-flight. Again and again, the jet flew to Kabul, where the crew kept the engines running as they offloaded cargo or passengers, took on equipment or evacuees, then flew back to Al-Udeid Air Base, Qatar, where Schaffner and his fellow maintainers would inspect the entire jet so it could be ready for the next trip.

There were hundreds of aircraft that flew in and out of Kabul during Operation Allies Refuge, including more than half of America’s 222 C-17s. Most of those aircraft had flying crew chiefs aboard, and Schaffner himself was part of a group of six airmen split into teams of two, with each team accompanying a jet back and forth out of Kabul. They would take care of their jets mid-flight and lead the inspection and repair efforts when they landed back at Al-Udeid.

Keeping an aircraft in working order is no easy thing, especially in the heat, dust, and constant use of flying back-to-back evacuation missions across southwest Asia in the middle of August.

“These planes don’t like the heat,” Schaffner told Task & Purpose in a recent interview, recalling temperatures as high as 115 degrees Fahrenheit during the evacuation. “We were constantly having to deal with overheats, things getting fried by the heat and then every other maintenance problem that you could possibly have.”

One set of components most affected by the heat, dust and overuse was the generators powering each of the four engines on a C-17. The conditions during OAR often led to the oil in each generator getting contaminated, which can take a generator offline. That is a problem because Air Force C-17s are not allowed to fly with more than one generator offline.

“Jets would take off with no faults and then come back a few hours later after a sortie into Kabul with two or three gen-oils” said Schaffner, using the maintenance term for a generator oil problem. “I think the people who got worked the hardest were the jet troops out there. Those guys were changing oil filters, servicing oil on those things constantly.”

Replacing the oil on a C-17 generator involves draining the generator, replacing the filter, resealing it, servicing it, and running the engine again to make sure it’s clear, the crew chief explained. Keep in mind that those airmen fixing the generators were likely doing so in the desert heat with minimal sleep and immense pressure to get it done as quickly as possible.

“It was a ‘this needs to happen, it needs to happen now’ kind of thing,” Schaffner said about the nature of OAR. “There was no waiting around for someone to tell us to do something. It was all about figuring out what needs to be done and then do it.”

“We were just getting the job done.”

Even if the generators were working perfectly fine, there was still a ton of work involved in making sure that each C-17 was ready for the next flight.

Schaffner said that as soon as the jet landed at Al Udeid, he and his team would go around their aircraft “with a fine tooth comb.” That involved checking the tires, making sure none of the brakes were worn out and that there were no hydraulic leaks, oil leaks or fuel leaks. Then they would make sure all of the electrical components on the flight deck were in good order, which took a few hours all on its own.

“Then once you find an issue you’ve got to fix the issue,” the crew chief said. “There’s a lot that goes into it.”

The flying crew chiefs inspecting the aircraft were not exactly fresh by that point, having already been up all day flying into a conflict zone, then ferrying evacuees with them back to Al Udeid. Schaffner described losing track of time amid the long hours.

“We stopped paying attention to how long we were doing it,” he said about himself and his team. “We were just getting the job done.”

Even after a thorough inspection, things can still go wrong on a flight. The crew chief recalled his first flight into Kabul where, upon landing, he discovered that the cargo door would not open, which was a problem because the C-17 was carrying a cargo deck’s worth of U.S. Army soldiers who needed to get out and help the evacuation effort. Fortunately, Schaffner had plenty of experience with the C-17 doors and ramp, so he quickly figured out that the electromechanical locks which hold the door in place were faulty. The solution: operate them manually, which the airman knew how to do.

It’s that kind of know-how which makes flying crew chiefs so valuable on important flights like the ones during OAR.

“Most of the [flying crew chiefs] out there were flying back and forth every day,” Schaffner said. “They would have barely 12 hours on the ground before they were up in the air again, because every single mission in and out of Kabul required a flying crew chief on board.”

Schaffner and his five other teammates helped out their colleagues whenever they could, but after three flights in and out of Kabul, he and his team were held in reserve to prepare for the last night of the evacuation. The team was responsible for three of the five C-17s that would make up the last U.S. aircraft to leave the country. Having a jet break down due to mechanical issues was not an option.

“Had something gone wrong it wouldn’t have been good,” said Schaffner, who explained that if a jet had broken down, the multi-million dollar aircraft would have been left behind and everyone onboard it moved to another plane. Despite several days of preparation, it was still nerve-wracking to board the jet for that final mission.

“There was a lot of apprehension right before take-off and on the way,” the crew chief recalled. “It was a two to three hour flight, so there was a lot of waiting and you would just sit there, left with your thoughts about what’s going to happen next.”

Schaffner and the rest of the airmen involved had done their jobs well, and the last night of the operation went smoothly, besides one of the C-17s deploying flares while taking off from Kabul as a precaution in response to some shots fired from the ground, the crew chief recalled. Then it was a matter of getting the beat-up jets home after weeks of non-stop action.

“We were kinda limping our way home taking advantage of every possible loophole to get the jet home without it breaking,” he said.

No, those loopholes did not involve duct tape, even though that material holds most of the rest of the military together. Air Force maintainers do use speed tape, which looks similar but is more durable and can withstand the high speeds of air travel.

“It doesn’t hold things together, it’s more a replacement for sealant when you don’t have time for it to cure,” Schaffner explained.

The airmen involved may have been in a similar state of disrepair. The crew chief said he did not have an exact number for how many caffeinated beverages he consumed to get through the operation, but it was “an unhealthy amount.” It was not until later that Schaffner fully realized he had been part of the end of a major chapter in American history.

“I don’t think it really hit it me until it was all said and done,” he said. “I was home sitting on my couch and I was like ‘wow I just participated in one of the biggest things to happen in a long time.’”

Schaffner was one among thousands of other service members who made OAR possible. Air Mobility Command, which oversees the Air Force’s airlift, aerial refueling and aeromedical evacuation missions, recently announced it would recognize the effort of its airmen with 96 Distinguished Flying Crosses, 12 Bronze Star Medals and one Gallant Unit Citation.

The airmen who form Air Mobility Command do not typically specialize in direct combat operations, which usually generate the most awards for valor. But the Afghan airlift was so massive and completed in such a short time under such difficult circumstances that AMC airmen found themselves in the spotlight.

“The men and women from this installation were ready to do whatever it took to deliver the forces needed to secure the Kabul airport and then to evacuate and save as many lives as possible,” Gen. Mike Minihan, the head of Air Mobility Command, said at the ceremony on Monday. “It’s what they did next that displayed heroism and selfless devotion to duty – the reason for today’s ceremony.”

It is even rarer for crew chiefs like Schaffner to receive a Distinguished Flying Cross, which is awarded “for heroism or extraordinary achievement while participating in aerial flight,” according to the Air Force. Maintenance airmen typically do not receive DFCs, since they stay on the ground. Even flying crew chiefs historically do not receive DFCs, since they are formally not part of the aircrew. That appears to be changing, because OAR highlighted the crucial role flying crew chiefs play in the air when the chips are down.

“In the past, we’ve been told FCCs are not eligible for aerial awards because they are technically ground personnel,” one C-17 pilot told Task & Purpose in April on condition of anonymity. “Which is bullshit in my opinion. We couldn’t do our job without them, especially during Kabul.”

Seeing other flying crew chiefs be awarded the DFC has been “a really big deal,” said Schaffner, who explained that FCCs are used to being in the background.

“We don’t often get recognized for the things we do to make sure the mission happens,” he said. “The crews that we’re with always make a point to thank us for helping them out. But on the larger scale we often go without the same kind of recognition as the crews that we’re flying with.”

Now the flying crew chiefs appear to be getting their due. But hearing Schaffner talk about it, he is just one of many airmen working behind the scenes. Those include the maintainers who toiled to replace all the contaminated oil in the engine generators, or the ones who somehow replaced a C-17’s broken landing gear strut in about 24 hours. That job alone involves grounding the aircraft and getting the whole thing up on jacks.

“Those guys were killing it out there,” the crew chief said.