“I am honored and humbled to be awarded this medal, but I’m convinced that any A-10 pilot would be able to do just as well, if not better.” 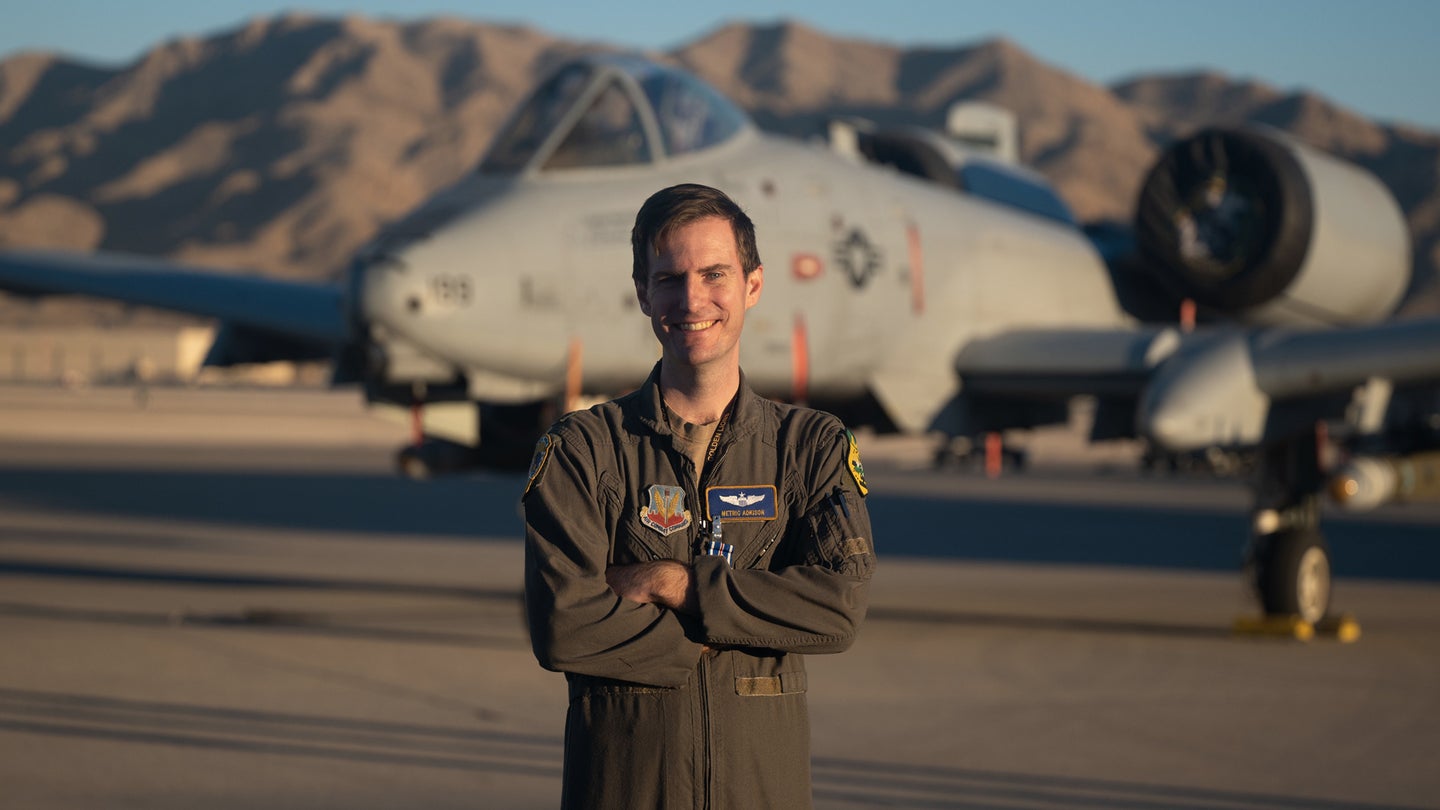 The Air Force A-10 Warthog community has a decades-long tradition of saving the lives of ground troops under fire, and one pilot was formally recognized for his actions when he received one of the highest Air Force awards for heroism last week.

Maj. Kyle “Metric” Adkison, of the 59th Test and Evaluation Squadron at Nellis Air Force Base, Nevada, received the Distinguished Flying Cross with combat device for an August 2019 mission where he and his wingman, Capt. Erin Fullam, flew danger-close strafing passes and coordinated a crowded airspace to kill enemy fighters and protect friendly troops in an urban area in Afghanistan.

“I am honored and humbled to be awarded this medal, but I’m convinced that any A-10 pilot would be able to do just as well, if not better than Capt. Fullam and I,” Adkison said in a press release. “We just happened to be the ones flying the lines that day.

The press release did not provide details on the exact date or location of the battle, or what hostile group was shooting at friendly forces that day, or whether the friendly troops belonged to the U.S. military or one of its allies. As first noted by Air Force Times, Aug. 27, 2019 was a particularly violent day in Afghanistan, where 162 people died and 47 were injured, “primarily Taliban fighters in air strikes,” according to the BBC, though it was not clear if that was the day Adkison’s mission took place.

No matter where or when the A-10 mission unfolded, Adkison and Fullam had their hands full flying it. Adkison had to simultaneously manage two close air support specialists on the ground over separate radio frequencies, serve as an eye in the sky to look out for enemy threats on the ground, coordinate other attack aircraft like the AH-64 Apache helicopter, and attack the enemy himself with danger-close strafing runs just five meters away from friendly troops.

Though it sounds like more than any one person can handle, the workload Adkison and Fullam juggled that day is one which other A-10 pilots have managed in the past. The most experienced A-10 pilot in history, Lt. Col. John ‘Karl’ Marks, found himself in a similar situation over Afghanistan’s Kunar Valley in 2014, where he had to be part-pilot, part-air traffic controller and part-Joint Terminal Attack Controller, the person responsible for coordinating air and fire support. But just because A-10 pilots can perform that level of multi-tasking does not make doing so any easier.

“That mission was unique just in the magnitude of the amount of things I had to use that I’d learned over many years of training,” Marks told Task & Purpose last year. “My wingman afterwards said he was just trying to hang on, like ‘I don’t know how you did that.’”

How do Warthog pilots learn to do all that under the intense pressure of combat? A ton of training and help from those on the ground. It also helps when the gun your aircraft is built around can fire 30mm shells at a rate of 3,900 rounds a minute.

“The quality training the A-10 community provided and faith in the superb capability of the A-10 gun system helped us grapple with the challenges we faced that day,” said Adkison. “The JTACs were extremely professional and competent, and their composure under fire was critical in enabling us to do what we did.”

The hard training and teamwork paid off: Adkison disrupted a surprise grenade attack, stopped an enemy “onslaught,” and coordinated Apache helicopter attacks in three separate instances, the press release said. The A-10 pilots’ actions that day “successfully broke contact with enemy forces,” and saved coalition lives. But Adkison said it was nothing more than what any other Warthog pilot can do.

“You don’t have to go far in the A-10 community to find someone with a similar story, many of which have received no recognition,” said Adkison, who was also recognized as the Old Pueblo Daedalian Flight pilot of the year at Davis-Monthan Air Force Base, Arizona in 2019. “The A-10 community is filled with incredible people doing exceptional things in an exceptional aircraft and I’m honored to count myself among these heroes.”