"I'm sorry for bleeding on you, Doc." 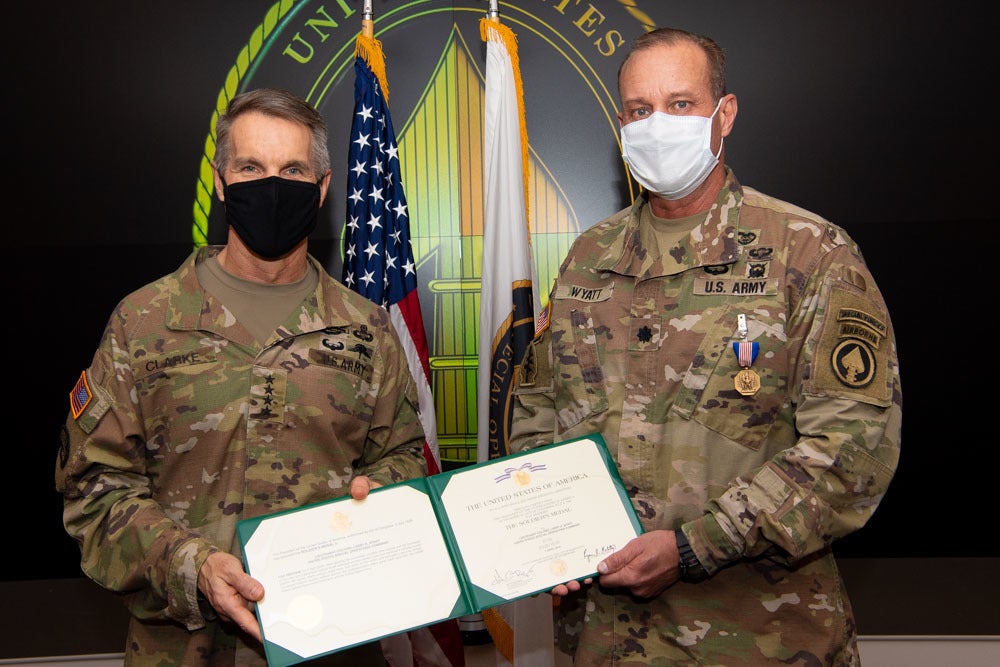 By the time Lt. Col. Larry Wyatt came to, he discovered that what was supposed to be an exhilarating afternoon bike ride had gone completely to hell.

It was April 7, 2019, and Wyatt — the 53-year-old director of the U.S. Special Operations Command’s medical clinic — had been traveling along the Pinellas bicycle trail just outside of Tampa, Florida. Wyatt was accompanied by his predecessor at the SOCOM clinic, retired Col. Thomas Wells, and the two of them were crossing a bridge when they saw two motorcycles barreling towards them.

One of the motorcyclists “lost control” of his motorcycle “so that the front end was coming up,” Wyatt recalled. “We were hugging the concrete bridge wall, and there was no going over the side because of a chain-link fence.”

The motorcycles struck the pair at well over 50 miles per hour, knocking both Wyatt and Wells unconscious. Their bikes were shattered by the impact, and Wyatt was dragged 30 yards behind one of the motorcycles before it came to a stop.

“I came to maybe 15 to 20 seconds after impact, and all I could hear was my dad’s voice in my head,” Wyatt recalled. “He’s an old mountain man from the Oregon wilderness, and I could just hear him saying ‘Get up, boy. Get up!'”

Getting up was hard. Wyatt had fractured his teeth, displaced his nose, and split his eyebrow. His left forearm was badly mangled; blood gushed from a hole down to the bone. Despite his injuries, Wyatt got to his feet and tied a tourniquet around his arm to stop the bleeding before walking to where Wells lay sprawled across the second motorcycle.

Well’s injuries were substantial. Luckily, so was Wyatt’s training. Across eight combat tours stretching from Operation Desert Storm to the U.S. campaigns in Iraq and Afghanistan, he’d served as in a host of roles, from a Special Forces medical sergeant to the physician’s assistant for the 101st Airborne. He may have been bleeding from his face and arm, but his training, along with decades of experience, would get the job done.

After attending to the two motorcyclists, Wyatt went to work on stabilizing Wells. As he did, blood dripped from his wounds down onto his friend and mentor. “I kept apologizing, ‘I’m sorry for bleeding on you, Doc,'” Wyatt recalled. “And his response was, ‘just do what you got to do.'”

The road to recovery since the accident has been arduous for Wyatt. He’s had multiple surgeries to reconstruct his nose, and at one point he experienced a pulmonary embolism as a result of the crash weeks after returning to duty. But it’s also come with recognition for his heroic actions.

On Dec. 22, SOCOM commander Gen. Richard D. Clarke presented Wyatt with a Soldier’s Medal at MacDill Air Force Base in Florida for his delivery of lifesaving care despite his own grave injuries.

“Wyatt’s personal example of selfless service, superb medical knowledge, and unhesitating decisive action are consistent with the greatest traditions of our uniformed services and played a pivotal role in saving the lives of two individuals, including himself,” the citation reads.

The accident has left a lasting impact on Wyatt. He travels with a tourniquet on his person constantly, and his mind often returns to that day on the bike trail when he was left with just the clothes on his back to help save his friend and mentor.

“Just like any incident in the military, you’re always thinking, ‘what could we have done better,” Wyatt said. “It was hard to think, period. I was bleeding everywhere, and I was just worried about my brother.”