Do you have dreams of buzzing the control tower after a day of barrel-rolling and air-to-air training against those goons... 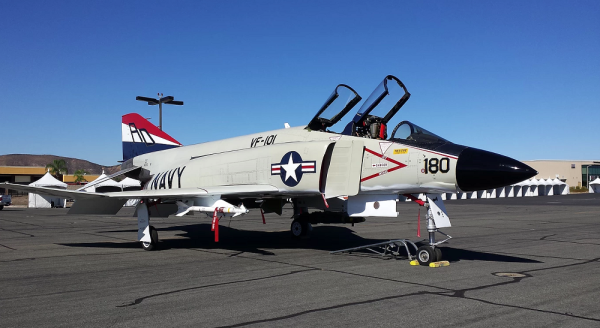 Do you have dreams of buzzing the control tower after a day of barrel-rolling and air-to-air training against those goons on the red team, and then hopping on your hog and cruising to the beach so you can douse yourself in tanning oil and play a spirited game of volleyball — while maintaining eye contact with your buddies for far too long?

Now, you can make those dreams a reality thanks to the folks over at Platinum Fighters: For a cool $4 million, they’ll sell you your very own F-4 Phantom II.

The Phantom McDonnell Douglas F4H-1F Phantom II Bu.145310 — a pre-production variant and the 11th one produced before the plane was ultimately re-designated the F-4 in September 1962 — is on sale for $3.95 million, Warbirds News reported March 14. Just 45 F4H-1F Phantoms were ever built using an earlier version of the J-79 turbojet featured in the widely-produced F-4s that first took the skies in 1959. And while this war plane isn’t fully operational, it’s pretty damn close to being flight ready, according to The War Zone.

If you’ve got the cash, why not splurge on the aircraft that was also the first in the F-4 family to be outfitted with hard points to carry bombs — and, as Warbirds News notes, subsequently helped convince the U.S. military that the warplane could function as both a tactical fighter and bomber. It just needs a little work to upgrade its engines, active its ejection seats, and tinker with its avionics.

So if you’ve got a couple million lying around, be prepared to drop a few more — and that’s before you even figure in gas.