Last year, retired Army Gen. David Petraeus ominously predicted that the divisive anti-Muslim rhetoric during the presidential election would not... 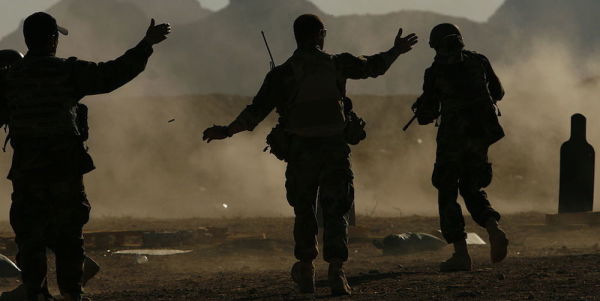 The immediate outcry was predictable and justified. It doesn’t require Petraeus’ experience to realize that labeling all citizens of certain Muslim countries as suspects helps jihadists recruit new members by pitching their struggle as a religious war between Islam and the West.

But what I fear more than the way this order aids groups like ISIS and al Qaeda are the short-term risks for our forces on the ground. Treating all citizens of Muslim nations like potential terrorists alienates our Muslim allies who are fighting terrorists with America today. Nowhere are these effects so palpable than with the special operations forces around the globe who interact with these allies on a day-to-day basis.

Related: Al Qaeda Was Ready And Waiting For The SEALs On Trump’s First Raid »

To understand these impacts of Trump’s order, it’s helpful to understand how special operations are conducted. The large majority of special operations involve working with a partner force that creates something we call a “force multiplier.” For example, a small group of special operators will deploy to an austere environment far away from U.S. forces to equip and train locals to be better and more effective fighters. Doing so, this small team of 12 or fewer Americans “multiplies” their impact by creating seasoned fighters out of hundreds or thousands of local nationals. The enemy, instead of facing a small team of highly capable Americans, faces a much larger group with well-trained and equipped fighters using local intelligence.

Strategically, this yields a better return on investment for the U.S. military. For every special operations-trained team deployed, there are thousands of conventional forces that America isn’t putting at risk to accomplish the same goal. Simultaneously, this is the exit plan: By training partner forces to proficiency, we won’t need to help them one day.

When I was in Afghanistan, I was part of one of these units that trained, mentored, and led an elite unit of Afghan commandos on combat missions. We would spend weeks training hundreds of commandos to proficiency and then fought arm-in-arm with them on raids against Taliban insurgencies in the deserts and mountains of Afghanistan.

The most essential elements in this relationship with our Afghan counterparts — as with any human relationship — were respect and trust. On our end, we respected their Muslim faith and Afghan culture, building trust slowly over time from risking our lives together in combat operations. Over time, they saw their cause was ours, and we were working together to achieve the same goal.

Meanwhile, an executive order effectively banning Muslims from the very nations that we are conducting special operations in shatters the trust these teams have painstakingly built. Imagine an Iraqi soldier fighting with us against ISIS who has seen reports that the new president has banned all Iraqis from entering America and told the CIA we might take Iraq’s oil in the future. Why would he want to work with us? There’s no shortage of irony and tragedy that the first American soldier to give his life in the Trump administration was a special operator in Yemen, one of the countries where Trump banned all incoming immigration the day prior.

This blatant violation for the respect for our partner’s religion and culture creates what we in the special operations community refer to as a “catastrophic loss of rapport.” This loss of trust and rapport by the administration puts our forces at risk and makes our teams combat ineffective. Our special operations teams can’t lead people into combat when they don’t trust us. Critically, these teams are the most vulnerable because they are imbedded with partner forces and hundreds of miles away from U.S. forces. The sentiment behind a perceived Muslim ban could very well incite “green on blue” attacks where the partners we train turn against us. Unsurprisingly, on Monday, the Iraqi parliament approved a “reciprocity measure” for Americans arriving in Iraq, raising massive questions about the future of the thousands of soldiers and contractors currently in country, particularly special operators fighting ISIS.

Policies always have unintended second and third-order effects, and sometimes these effects can create more problems than they solve. To be certain, operators have seen policies from both Republican and Democrat administrations that range from fatally flawed to incredibly effective. But, there is no mistaking the outcome of this policy; it will make the jobs of special operators more difficult, and potentially endanger their lives.

While the current ban does not encompass all Muslim countries, Trump’s campaign rhetoric did openly support a Muslim ban, creating the global perception of a bias against Muslims. When deployed abroad, we learned quickly that perception is reality. Trump must realize that every executive order, press statement, and even tweet has global ramifications due to his office. How he frames the conflict against jihadists defines the reality our men and women in uniform operate in. Moving forward, he must practice more care.