“We owe you a better system, and more transparency…and we will deliver.” 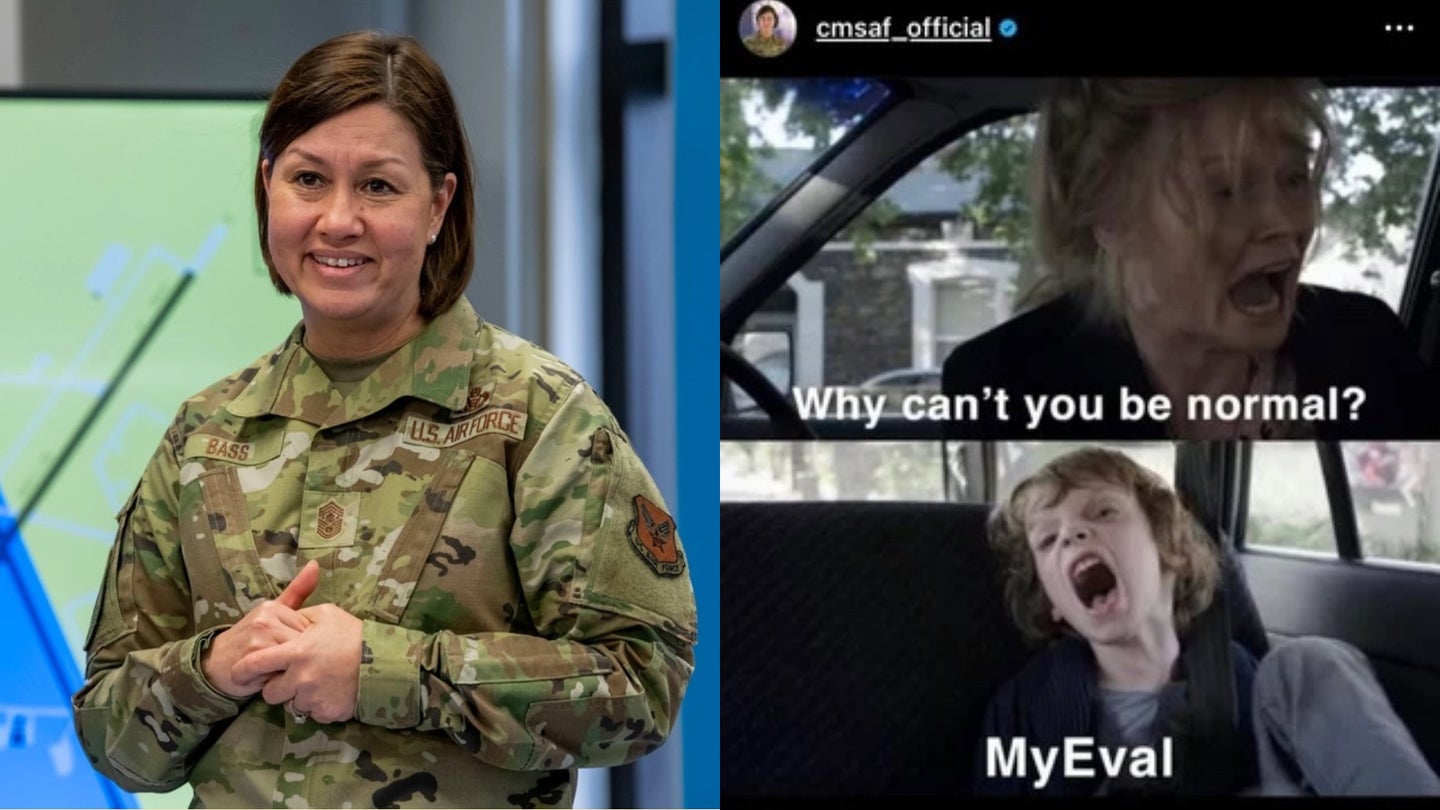 The implementation of the Air Force and Space Force’s new evaluation system for enlisted and commissioned airmen and guardians is not going well, as indicated by the top enlisted leader of the Air Force posting a meme trolling the system on her Facebook page on Monday.

“We get it, folks,” said Chief Master Sgt. of the Air Force JoAnne Bass in her post. “We have seen the memes and the jokes…more importantly, we have seen the legitimate concerns and feedback about myEval.”

The meme was inspired by a scene from the 2014 horror film “The Babadook,” where the frustrated main character pleads with her son to “just be normal,” but he screams in response. In the meme, the screaming son has the name of the evaluation system “myEval,” printed along the bottom of the image.

“As it stands now, the system is not able to seamlessly process reports into a member’s official records,” Bass wrote. “Effective immediately, we’ll begin using PDFs from e-Pubs to complete enlisted and officer evaluations.”

Bass’ post acknowledges the stream of memes and posts that have poured through social media forums like the unofficial Air Force subreddit and the popular Facebook page Air Force amn/nco/snco since myEval rolled out across the Air Force in February. In the posts, commenters complained about how the bug-ridden system is “complete trash,” migraine-inducing, and “the root of MyAnxiety.” Bass’ post also backs up one made by the Air Force Personnel Center on Saturday where the command decided “to pause using the current version of myEval to create and process all enlisted and officer evaluations.”

The decision to pause using MyEval stands in contrast to the optimism service officials expressed when they first rolled it out earlier this year.

“The myEval application reduces administrative burdens, enhances the user experience, and provides leaders with performance data to assist in making informed talent management decisions,” Lt. Gen. Brian Kelly, then-Deputy Chief of Staff for Manpower, Personnel and Services, said when the system was first launched on a limited scale in January.

Kelly explained that the system was also meant to help the Air Force switch to a cloud-based evaluation system grounded in Airman Leadership Qualities, which lay out new performance areas, including emotional intelligence and adaptability, for evaluating airmen. The intent of MyEval was a good one, said Katherine Kuzminski, senior fellow and program director for the Military, Veterans & Society project at the Center for a New American Security, a Washington, D.C. think tank. The system was meant to centralize and automate necessary information like fitness and personal data into the service’s performance evaluation system, Kuzminski explained, which in turn would make it easier to implement the Airman Leadership Qualities program.

“MyEval is intended to give the Air Force the ability to track across these broader metrics, thus providing the information necessary to select, promote, and retain airmen with the skills and attributes necessary for a modernized force,” she said.

That all sounds good on paper, but the reality of myEval has fallen short. Bass’ post on Monday was not the first time service officials have acknowledged the program’s failings. In September, the Air Force vice chief of staff, Gen. David Allvin, said on a Facebook Live chat with Bass that the program was “not as well-executed as it could be,” Air Force Times reported at the time. “We own that.”

Nearly three months later, the myEval situation has not improved. That is a big problem because performance reviews play a major role in the life of service members: they can influence whether airmen or guardians are promoted, receive awards or new assignments. When connections or deadlines are missed due to faulty software, it can add serious stress and uncertainty to the life of a service member. The Air Force Personnel Center (AFPC) seemed to acknowledge this by writing that the “primary consideration is to ensure there is no negative impact to any of our airmen or guardians.”

AFPC wrote that the pause will allow relevant agencies in the department to focus on myEval’s future “so it provides the trust, reliability, transparency and simplicity we need moving forward.”

It does not help that the myEval problems occur as the Air Force also hopes to revamp its personnel review system more broadly, such as by pivoting away from bullet-style writing and towards narrative-style statements for award nominations and performance reports. Bass acknowledged the problems that myEval was causing airmen and guardians.

“The most important consideration is that we ensure there are no negative impacts to any of our airmen, while we review the way forward with myEval,” she said. “We owe you a better system, and more transparency…and we will deliver.”

It was not immediately clear when airmen and guardians can expect a better system, but Kuzminski said it was a good thing that department leadership is tracking the issue.

“While the system is not functioning as intended, it is refreshing to see service leadership out front taking accountability for the rollout challenges and investing their time and leadership in finding solutions,” she said.