‘Is this real?’ — Inside the Air Force’s first medevac flight after the Abbey Gate suicide bombing

“There were tracers, flares, fires and gunshots going off. I remember being like, ‘Is this real?’” 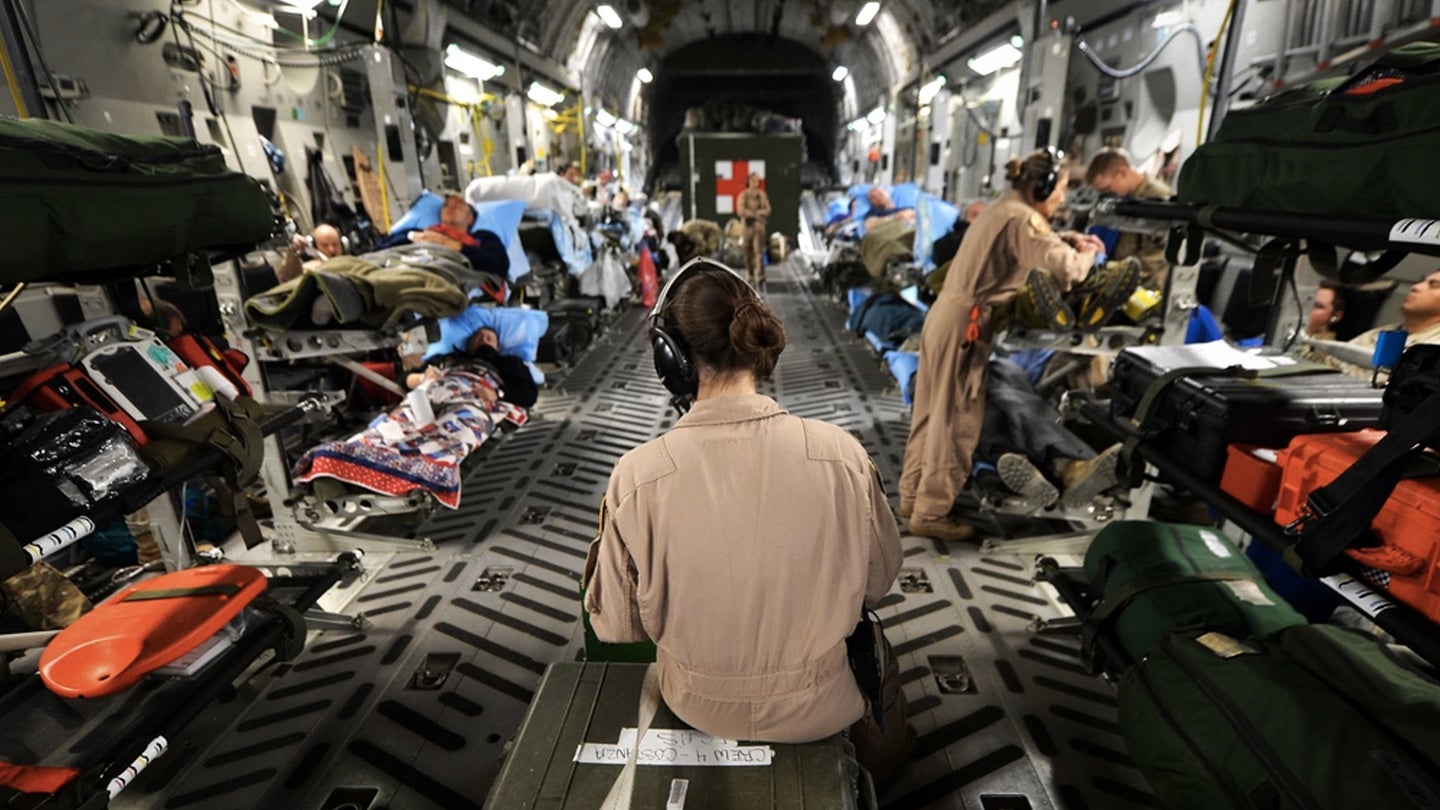 Time seemed to stand still for a moment as Air Force Maj. Katelyn Dunahoe took in the dire situation.

The flight nurse had just landed at Hamid Karzai International Airport in Kabul, Afghanistan on the night of August 26, 2021, just a few hours after a suicide bomber at the airport’s Abbey Gate killed 13 U.S. service members and 160 civilians and injured many more. After landing on a darkened runway where the pilots used night vision goggles to find their way, Dunahoe’s C-17 transport jet, callsign Moose 98, became the first to respond to the attack. As injured Marines, soldiers, sailors and civilians came aboard, the major knew she and her fellow aerial medical evacuation airmen had their work cut out for them.

“I felt like time kind of froze for a minute,” Dunahoe told Task & Purpose. “Then you just go into gear. You train for this, you develop a plan and you have to execute.”

Dunahoe and the 18 other members of Moose 98 — whose ranks included pilots, loadmasters, flight nurses, aeromedical evacuation technicians and a critical care air transport team — received the Distinguished Flying Cross on Friday for their efforts to keep more than two dozen severely wounded U.S. service members and Afghan civilians alive on the flight from Kabul to Landstuhl Regional Medical Center, Germany in the wake of the bombing.

The 19 airmen received the medals at a ceremony at Travis Air Force Base, California, where eight other airmen also received the DFC for safely handling an attempted hijacking that took place during their evacuation flight, callsign Reach 651.

Both missions took place during Operation Allies Refuge (OAR), the massive effort to evacuate more than 124,000 people from Afghanistan during the last week of the U.S. war there.

The airmen at Travis are the latest in a long line of Air Mobility Command members to receive the DFC, which is awarded “for heroism or extraordinary achievement while participating in aerial flight,” according to the Air Force. In October the command announced that it would award 96 Distinguished Flying Crosses, 12 Bronze Star Medals, and one Gallant Unit Citation to its airmen for their work during OAR. More than a year later, the memories of that intense mission are still fresh for many service members.

“When the letters ‘O’ ‘A’ ‘R’ are strung together, you probably can immediately smell again the results of too much humanity in too confined a space for too long of a time, or you can feel the sweat between your shoulder blades dripping down your back because of the excessive heat and the stress, “ said Maj. Gen. Corey Martin, commander of the 18th Air Force, of which the Travis-based 60th Air Mobility Wing is a component, at the ceremony.

While most of the Air Force missions in and out of Kabul during OAR involved transporting hundreds of evacuees to Al Udeid Air Base, Qatar or other locations around the Persian Gulf, Moose 98 stood out because it responded directly to a mass casualty event where the aerial medical crews and aircrew had to keep a large number of seriously-injured patients alive aboard not just an intercontinental flight, but also amid turbulence that Dunahoe described as much more intense compared to what most passengers experience aboard a civilian airliner.

The U.S. military has two decades of experience performing long-haul flights with patients severely wounded by improvised explosive devices and other weapons during the Global War on Terror. But mass casualty events with more than a dozen patients such as those injured by Abbey Gate do not occur as often. Indeed, this was Dunahoe’s first mass casualty event —  and the challenges began to pile up before Moose 98 even took off from Al Udeid.

The aircrew sought to fill the C-17’s gas tanks up to its maximum fuel load ahead of the long mission. To gas up faster, Tech Sgt. Michael Raucci, the flying crew chief, hooked the jet to two fuel trucks at the same time, an uncommon procedure that helped save time “in a dynamic situation where seconds could make the difference between life or death,” Capt. Audrey Imperial, the master of ceremonies at Travis, said on Friday.

Thanks to the contributions of Raucci and other airmen, Moose 98 took off an hour and 32 minutes ahead of schedule. The scene they landed in felt like something out of a film, one airman said.

“I remember it felt like a movie. Like when you see those war movies with the litter patients coming on and the red lights. There were tracers, flares, fires and gunshots going off,” Senior Airman Alexis Sanchez, C-17 loadmaster with Moose 98, said in a press release. “I remember being like, ‘Is this real?’”

The medical team worked quickly to triage patients, transport them onto the aircraft and transfer all the necessary care information. At one point, Tech Sgt. Matthew Keefer, an aeromedical evacuation technician “commandeered a vehicle” to get patients onto the C-17 more quickly, Imperial said. But it was still a chaotic situation, as walking wounded patients sometimes showed up to the jet without warning in tattered clothes and missing shoes.

Adding more complexity was the arrival of several unexpected pediatric patients, who Air Force medical teams do not typically encounter downrange, Dunahoe explained. To make matters worse, Moose 98 had only one critical care air transport team (CCATT) kit, each of which can support three severely-injured patients. The CCATTs aboard Moose 98 would have to make it work for at least twice that number.

“Our critical air transport team did really well and managed the supplies, and we were able to take a flight over 8 hours with what we had, which is really amazing,” Dunahoe said.

The patients were in dire straits; they included a female Marine who broke into convulsions and vomiting due to traumatic brain and chest injuries; a male Marine who could not survive a cabin altitude above 5,000 feet due to a critically-bleeding chest injury; a child with a skull fracture, a foreign national with “massive internal bleeding” and other serious cases, Imperial said. Dunahoe herself saved a walking wounded Marine from a fatal hemorrhage by “reinforcing a gunshot wound to the shoulder that was actively bleeding,” Imperial said.

The flight nurse was struck by the selflessness of the service members under her team’s care. She saw Marines, sailors and soldiers try to help each other out and offer litter space to others despite their own grave conditions.

“I would say, ‘hey I’m going to set out a litter for you to lay down in,’ and they would say ‘No, I want him to have it,’” Dunahoe recalled. “Little things like that made me stop and think ‘wow, we really do have the best military in the world.’”

Transferring all those severely injured patients took time and delayed Moose 98’s departure by two hours, which left the aircraft’s still-running engines short of the fuel it needed to fly all the way to Germany. The sun was rising as the C-17 finally took off and headed west, shortly before a barrage of rockets hit Hamid Karzai International Airport, Imperial said. It was a long flight, made longer by the requirement to stay below 5,000 feet cabin altitude. While cabin altitude does not necessarily equate to the aircraft’s actual altitude, keeping a lower cabin altitude often requires flying lower than usual. That means the aircrew had less flexibility to dodge thunderstorms or other turbulence.

On the way to Landstuhl, the Moose 98 medical team had to think fast to keep their patients alive. At one point, Master Sgt. Matthew Newman, a CCATT respiratory technician, saw the blood oxygen levels were too low for a Marine who had undergone open chest surgery.

Other medical team members transferred blood, resuscitated patients, kept ventilation machines running, recorded vitals, and generally worked nonstop the entire flight to keep their charges alive. It helped that the C-17 is the military’s flying hospital of choice. Also known as ‘the Moose,’ the C-17 has ample space, built-in attachments for central oxygen, and electrical systems allowing airmen to reconfigure the cargo bay to suit the needs of up to 74 patients with a wide range of conditions. The cargo bays also have bright lights, heat, air conditioning and, perhaps most important in a military operation, “the ability to serve warm coffee,” according to a 2019 press release.

But the Moose is still an aircraft, and aircraft run into turbulence, which makes delicate medical procedures much more difficult.

“It’s hard enough taking care of patients in the hospital,” Dunahoe said. “Now imagine when you take off on a commercial plane, but even more exacerbated, and having to manage equipment and patients and make sure their vitals are good.”

The trauma patients, already hurting, have to endure more hardship due to the shaking and vibrations, the flight nurse added. Some of the worst turbulence occurred during takeoff, landing, and a mid-air refueling the C-17 received over the Black Sea from a KC-135 tanker scrambled out of Incirlik Air Base, Turkey, about 15 hours after the mission had first started in Qatar. The turbulence got so bad that several members of the medical team had to tie themselves to the litters so they could keep caring for patients. Dunahoe said the eight or nine-hour flight was both the longest and shortest of her life.

But despite all the challenges facing them — the long flight, the limited supplies, the turbulence and the severity of the patients’ wounds — the crew and medical team on Moose 98 did their jobs: they successfully delivered all their patients to Landstuhl alive.

“This crew’s remarkable courage, extraordinary efforts and exceptionally meritorious achievement performed under combat conditions goes well beyond what is typically expected of them,” Imperial said.

Still, the aeromedical evacuation mission to Landstuhl was not the end for the crew of Moose 98. Less than a day after landing in Germany, Dunahoe and the other airmen got on another flight to help with the rest of OAR. Looking back more than a year later, the flight nurse said she still thinks about the Marines, sailors and soldiers under her care that day, and she hopes they are doing well. The intense experience is still sinking in for her.

“Sometimes I look back and I’m like ‘wow, I can’t believe that happened,’” she said. “I can’t believe I was a part of something so amazing and bigger than myself. It was just awesome to have been around such amazing crew members. Sometimes it seems surreal.”