In space, no one can hear you stab. 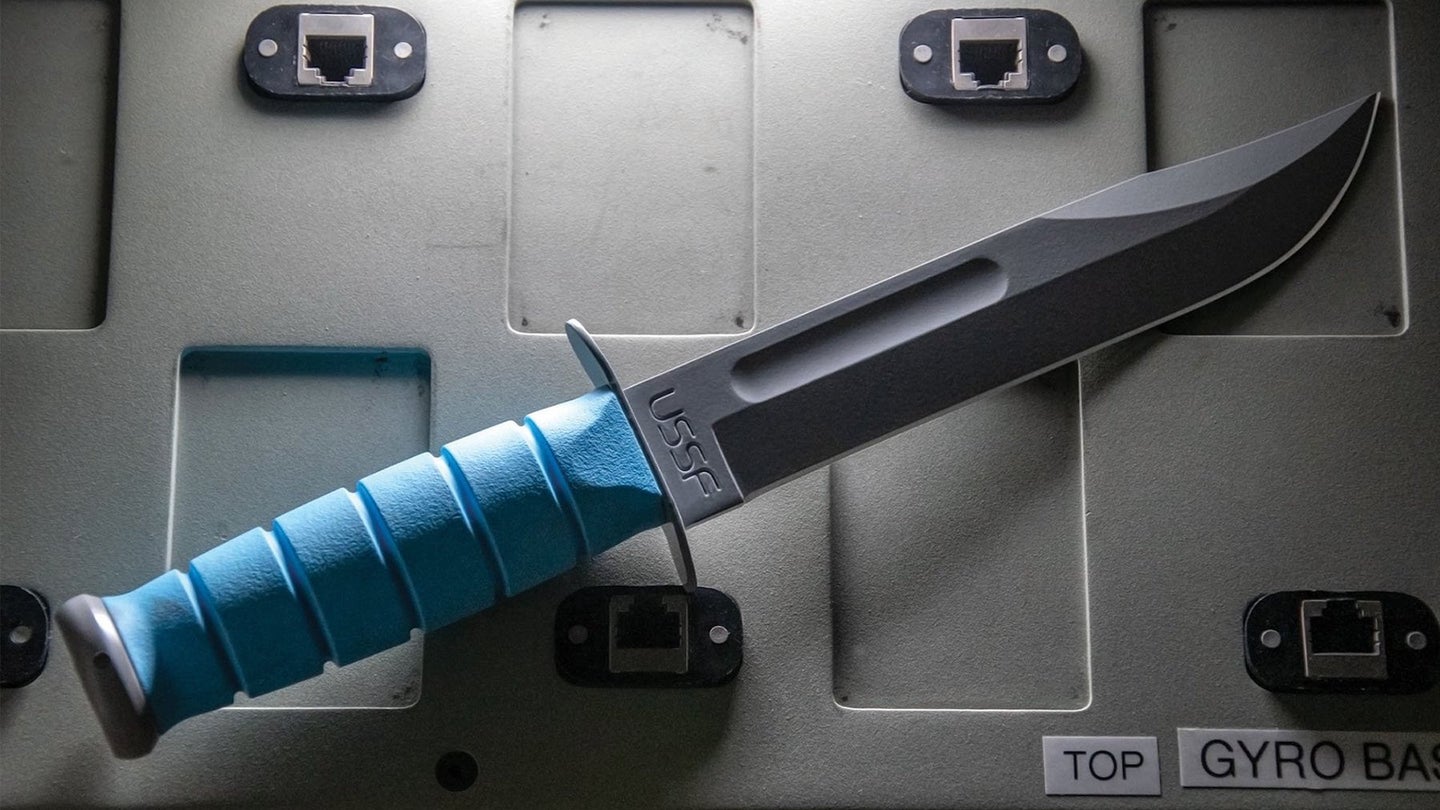 So legendary blademakers Ka-Bar Knives — the same people who make that knife that every boot Marine and turbo-lifer has somewhere in their personal effects —decided to make a series of knives as a nod to the U.S. Space Force, the freshman branch of the armed forces. This series features a USMC Fighting Knife-styled 7-inch fixed blade, a TDI Dagger, a Corser Folder, and various luridly-branded ballcaps, t-shirts, and hoodies.

Ignoring the fact that in space, uncoated steel could immediately contact weld to the first object it impacts that’s made of similar metal, and also ignoring the fact that this is literally just a Ka-Bar with blue grips and a logo that’s rendered in the 80’s NASA font, the Space Force Ka-Bar (or Space-Bar) is giving me very complicated feelings.

In my attempts to parse my thoughts on this bizarre cash-grab, all I ended up with was a series of headline concepts, some suggested by friends, that are all truly worthy of the garbage bin. Here they are.

‘In space, nobody can hear your rat-tail tang break’

My sharpening guy suggested this title when I showed him the Space-Bar. I rejected this idea because then I have to explain that a rat-tail tang is not related to the hairstyle enjoyed by young Appalachian boys, and is in fact a weight- and cost-saving measure by knife companies. Nerd shit, basically.

I declined to go for this one because Jewish space laser jokes are already as passe as this knife’s design. Also, this isn’t even a bayonet!

Confession: I’ve never been to a combat zone, so there’s that. I don’t even know if killstreaks are a real thing. Or Xenomorphs. Someone who thinks Kuwait is a real deployment, please advise.

So now I have to explain why bright blue is a fake knife color, which is more nerd shit, so no. Basically, people who have bright blue training knives think it’s a bad idea to have a real knife that looks similar out of the corner of their eye, for some reason. Also declined to use this one because I don’t feel like getting bullied by hackers in StarCraft II or however it is that the Space Force does hazing.

Look, there’s no way that my editors are going to let me make a crude anatomical joke in the headline of an article and pay me actual real American dollars for it. Also this would totally skyline me as a Star Wars dork. Also, that title is way too long.

‘Moon’s haunted. You heard me’

Again, more nerd shit. This time having to explain an obscure internet meme that originally featured astronauts coming back to Earth early to get guns. Except somehow I was going to convince you that a blue Ka-Bar is the ideal weapon to fight moon ghosts.

‘The real version of the Halo 2 energy sword”

I guarantee I can swing this thing and not fly halfway across the map in one lunging stab, only to get called gay by the guy I just killed.

‘The Spacebar: not just for your computer anymore’

Bottom line, this is a dorky idea: It’s the same 1095 steel knife but with a funky blue SEBS grip and the Ka-Bar logo written in NASA font. They didn’t use the official DoD logo, or even a similar design language, and nowhere on their site do they feature any sort of endorsement from the Space Force. I guess the things I can praise this knife for are being no more expensive than a normal Ka-Bar, and the blue looking pretty cool.

All levity aside, the idea of a knife company knowing how to have fun with their product and somehow making a series of knives with blue grips some sort of hilarious concept is a refreshing thing in today’s overly-serious world of companies whose names begin with stuff like “tactical” and end with “solutions.” Who knows: Maybe the key to reaching out to a new demographic was a blue-colored facelift.