The man being held responsible for crashing his truck into a group of motorcyclists in New Hampshire in June was "high on drugs and said he was reaching for a drink" at the time of the crash, the Boston Globe reports 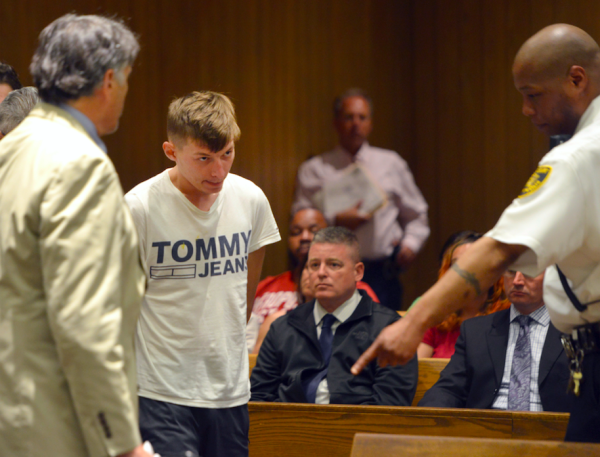 The man being held responsible for crashing his truck into a group of motorcyclists in New Hampshire in June was “high on drugs and said he was reaching for a drink” at the time of the crash, the Boston Globe reports.

Volodymyr Zhukovskyy, 23, tested positive for an unspecified drug “that rendered him incapable of driving” on the day of the crash, which killed seven members of the Jarheads Motorcycle Club — an organization for Marines and select Navy corpsmen — and left several others injured, the Boston Globe reported Thursday, citing a Federal Motor Carrier Safety Administration report obtained through public records request.

The FMCSA report stated that Zhukovskyy was reaching for a drink on the passenger side of his vehicle when he crossed the center of the road and hit the group of bikers.

Zhukovskyy was uninjured in the crash. He has pleaded not guilty to seven counts of negligent homicide.

According to the Globe, Zhukovskyy had previously been arrested and “accumulated driving violations … in at least six states” and spent three months in a rehab center for alcohol and drug addiction.

As multiple media outlets previously reported, packages believed to contain heroin were found in Zhukovskyy's home shortly after the crash.

In addition, Zhukovskyy was arrested in Connecticut in May after he refused a chemical sobriety test after local police officers pulled him over on suspicion of driving under the influence

But while Connecticut's Registry of Motor Vehicles alerted Massachusetts' registry of the the refusal to take a sobriety test, Massachusetts officials found that their system wasn't working properly and hadn't processed notifications from other states for years, the Globe reports.

As a result, trucking company Westfield Transport was apparently unaware of Zhukovskyy's May arrest in May, according to the Globe, although owner Dartanyan Gasanov said that he knew Zhukovskyy “had been arrested for drunken driving in 2013” and hired him anyway.

“It's very hard to sleep at night,” he said.