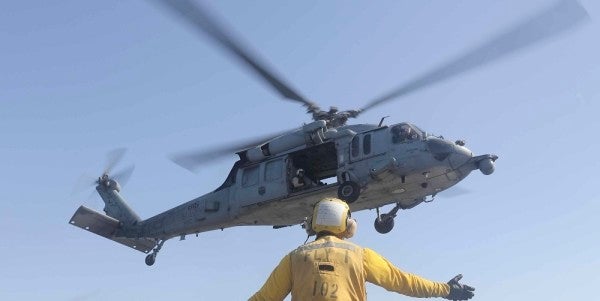 Search and rescue efforts have ended without locating a sailor from the aircraft carrier USS Abraham Lincoln, who was reported overboard on Wednesday, Navy officials have announced.

The Lincoln along with the cruiser USS Leyte Gulf, Patrol Squadron 10, Patrol Squadron 40, and the Spanish frigate Méndez Núñez ended search efforts on Friday after looking for the sailor in the Arabian Sea, a 5th Fleet news release says.

“Our thoughts and prayers are with the family, friends and shipmates of our lost sailor,” Vice Adm. Jim Malloy, 5th Fleet commander, said in the news release. “During this tragic time, I want to thank the Spanish Álvaro de Bazán-class frigate Méndez Núñez for their assistance in the search operations, and all the sailors involved in the search for their valiant efforts to find our shipmate.”

SEE ALSO: USS Boxer shoots down Iranian drone as the US and Iran edge closer to conflict

WATCH NEXT: V-22 Ospreys In Action