'I was, frankly, shocked by the numbers that were in there' 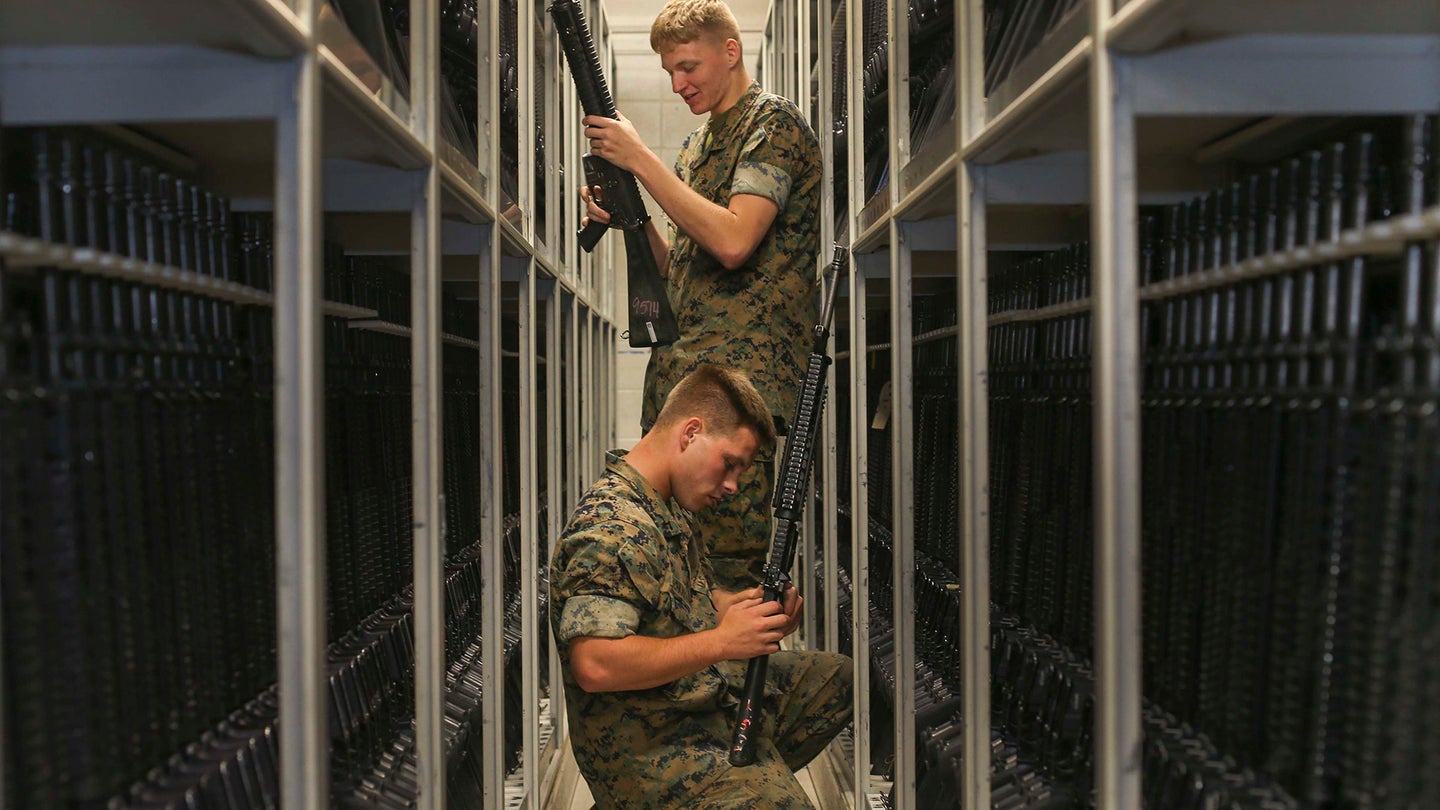 Marines who work at the armory perform weapons check on a weapons on Marine Corps Recruit Depot Parris Island S.C. June 21, 2019. The armory is in charge of over 10,000 rifles on Parris Island.(U.S. Marine Corps photo by Lance Cpl. Ryan Hageali).
SHARE

Army Gen. Mark Milley, chairman of the Joint Chiefs of Staff, told lawmakers on Thursday that he does not know exactly how many military weapons have been lost or stolen over the past decade, but he was “shocked” by the numbers of missing weapons reported by the Associated Press.

In a series of exclusive stories, AP reporters revealed this week that the military cannot account for at least 1,900 rifles, pistols, grenade launchers, and other weapons that somehow walked out of arms rooms between 2010 and 2019.

Of those weapons, about 1,300 came from the Army, which has reportedly tried to obfuscate the number of weapons that it has lost track of, according to the Associated Press.

On Thursday, Milley told Sen. Dianne Feinstein (D-Calif.) that he had seen the media reports about missing weapons and he owes Congress answers about the scope of the problem.

“I was, frankly, shocked by the numbers that were in there,” Milley said. “The reports that I have from the services, as of this morning, are significantly less numbers than are reported in the media. That’s not to say it’s zero, but it’s much less. So, I need to square the balance here. I owe you a firm answer.”

Milley did not specify how many weapons the military branches have officially reported missing or stolen. The general also vowed to resolve the conflicting figures from the Associated Press and military branches and provide Congress with the exact numbers of unaccounted for weapons “very, very quickly.”

“I’ve asked each of the service chiefs to go back and let’s get the numbers; let’s get the reports over to you to make sure that we can level set as to what’s correct and incorrect,” Milley said.

In trying to determine how many weapons the military has lost track of, the AP received little to no help from some of the military branches. The Air Force did not provide any data. Service officials said they could only respond after a Freedom of Information Act Request filed more than a year ago was fully processed.

Meanwhile, the Army fought for years to keep the number of its missing weapons hidden and it ultimately provided “misleading” figures that conflict with internal documents, the AP reported.

Army spokesman Lt. Col. Brandon Kelley told the AP that the service’s inventory system does not readily track how many weapons have gone missing or stolen. Criminal investigative summaries only recorded 230 missing weapons from 2010 to 2019, but two separate memos obtained by the AP tracked 1,303 lost or stolen rifles and handguns between 2013 and 2019, most of which were stolen.

Kelley declined to comment on the disparity between the two estimates of missing weapons when contacted by Task & Purpose on Thursday.

“The Army takes weapons accountability very seriously,” said Army spokeswoman Col. Cathy Wilkinson. “While we have stringent physical security measures, we have more work to do to ensure that our property accountability and criminal reporting systems are seamlessly linked together.  The Army staff met today to develop a way forward to fix this problem and we will provide more information as this effort evolves.”

For the other services: The Navy has reported about 300 lost, stolen, or recovered small arms between 2010 and 2020, said Navy spokesman Lt. Rob Reinheimer. The Marine Corps declined to comment.

Milley told Congress that the military conducts monthly inventories of arms rooms and company commanders are required by law, regulation, and policy to account for all weapons. Armory custodians are typically required to conduct visual inspections of weapons on a daily basis.

“If anything becomes missing or unaccounted for in any manner, shape, or form, there’s a full-fledged investigation by CID as well as unit chains of command,” Milley said. “And if anyone is found negligent at all, they are relieved of their command or punished in some other way.”

In a sign of how seriously Milley is taking this issue, the general has praised the AP for its reporting, Butler said.

“Although we can’t yet verify the numbers reported by AP, the chairman believes this is another example of the free press shining a light on important subjects we need to get right,” Butler said.

UPDATE: This story was updated on June 17 with a statement from Army Col. Cathy Wilkinson.

Featured image: Marines who work at the armory perform weapons check on a weapons on Marine Corps Recruit Depot Parris Island S.C. June 21, 2019. The armory is in charge of over 10,000 rifles on Parris Island.(U.S. Marine Corps photo by Lance Cpl. Ryan Hageali)