“The Secretary of Defense, with his entourage — he just walked up." 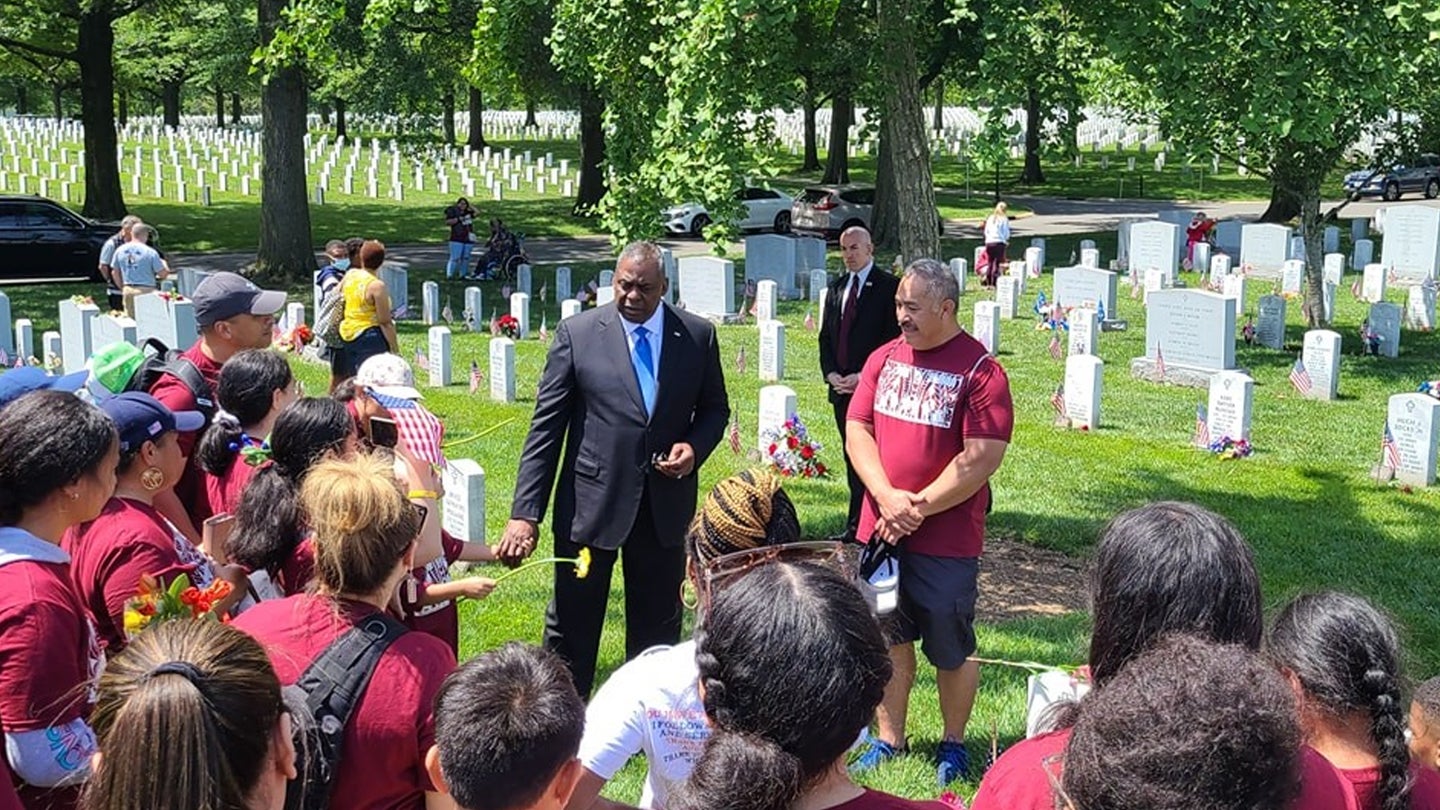 Army Maj. Puna Ta’amu, who was visiting graves with the group, Toa O Samoa, said they’d planned to visit several graves of fallen Samoans whose family couldn’t be there for Memorial Day. They were laying wreaths at each grave, talking about each person’s story, and singing Samoan songs and dancing.

Ta’amu said at one point they noticed a woman standing at a grave nearby, her brother’s, smiling and following along with the group’s song. They decided to take a brief detour to honor the woman’s brother as well.

In a video posted to TikTok, Austin quietly approaches and stands behind the group’s leader, Mareko, who recently retired from the military after more than 30 years explaining to the woman the song they were planning to sing. Just before they start, Austin taps Mareko on the shoulder.

“The Secretary of Defense, with his entourage — he just walked up,” Ta’amu explained on Monday.

What happened next was uploaded in a YouTube video: Austin takes the hand of a little boy next to him — Ta’amu’s five-year-old son, who she said was trying to give Austin a flower — and thanked the group for being there.

“I want to thank you guys for your sacrifices and your loss, and tell you how much the country appreciates what you do each and every day … I know it’s a special day, I know you’re here for a special reason, and I just want to add my voice and gratitude to all of you.”

Ta’amu said she’d noticed him approaching; after parking in an SUV nearby, Austin walked directly towards their group. She recognized him immediately since they had met in 2014, when she was a company commander serving in Kuwait and he was the commander of U.S. Central Command.

“For me, to see him first as a commander and then see him be in charge as a civilian was a pretty cool experience,” Ta’amu said of seeing him on Memorial Day. “Not just for me, but all the other service members and retired folks who were there with us.”

Austin, 67, who retired from the Army in 2016 after more than 40 years in uniform, has comforted Gold Star families and knows the human cost of war, The Washington Post reported.

When asked about the encounter on Monday, Pentagon spokesman John Kirby said Memorial Day “is personal to Secretary Austin. And he knows all too well how personal it is to our Gold Star families.”

Ta’amu said Austin spent several minutes talking with their group before moving on to visit with others who were visiting graves at Arlington. While many of the young kids present may not have fully understood who Austin was, Ta’amu said, they could tell he was important. And for service members like Ta’amu and the veterans in the group, it made the day that much more meaningful.

“It wasn’t until he left that we actually sat back, talking about it and like how cool it was for us that are in the service and that have served,” she said. “That we actually got to meet the head guy.”