Everything right and wrong with the mortar trooper from ‘The Mandalorian,’ according to a Marine mortar platoon commander

A long time ago, in a mortar platoon far, far away. 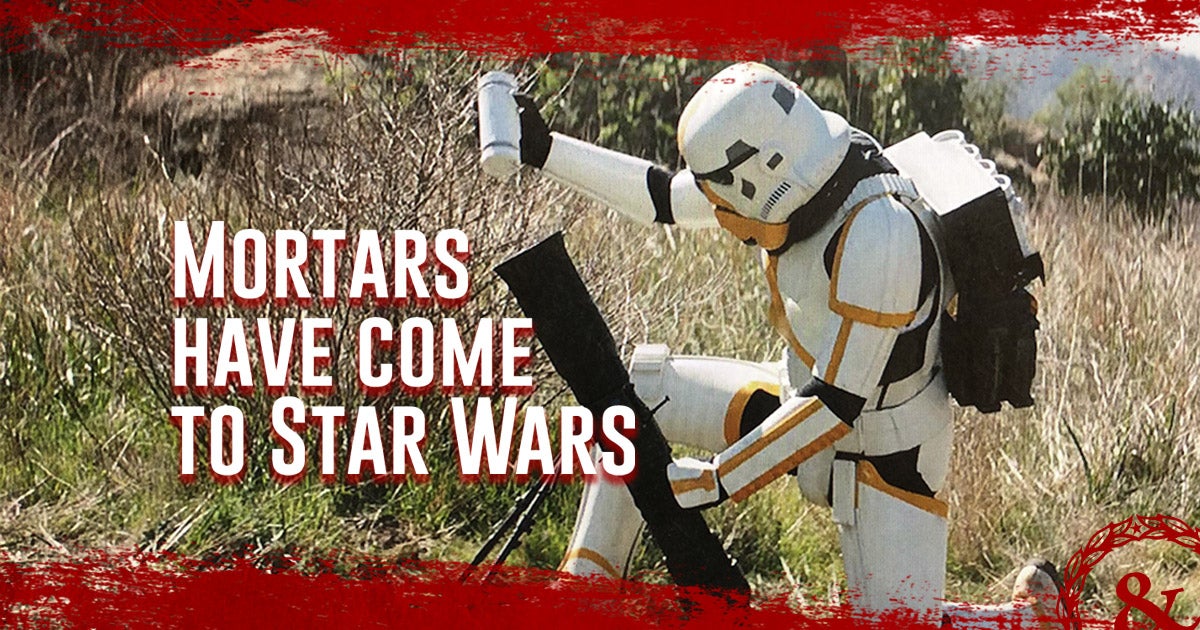 In a recent episode of The Mandalorian (Chapter 14: The Tragedy), mortars made their debut in the world of Star Wars.

Editor’s note: This article was originally published on Dec. 18, 2020.

The reaction in the relatively small world of mortars can best be summed up by this post on Instagram:

I am currently a Marine 81 mm mortar platoon commander in 2nd Battalion, 6th Marine Regiment at Camp Lejeune, N.C. When the mortar trooper came off the landing craft, I excitedly pointed and exclaimed to my girlfriend, “Babe! The Stormtrooper has a mortar! Mortars have come to Star Wars!” Needless to say, she was not quite as excited. And after watching the full episode, I decided to jot down some thoughts on what I saw:

The mortar trooper is tactically and technically proficient

On his own initiative, the mortar trooper — distinguished by yellow markings and backpack full of ammunition — gets off of the landing craft, immediately sets up his mortar in the handheld with a bipod assist, and begins slinging high-explosive rounds to suppress the defenders of Grogu.

This allows his rifle blaster Stormtrooper brethren to maneuver closer to the enemy, although it does not do them much good to get closer. The mortar trooper seems to be an attachment to the platoon and he is possibly a member of Special Forces given that he alone is operating the system and carrying all of his ammunition.

In each of the three on-screen mortar rounds, the mortar trooper gets within an impressive 10-20 meters of his target, Fennec Shand. The first round appears to have no effect but really should have concussed her and affected her with shrapnel. The second round suppresses Shand, forcing her to take cover while allowing Stormtroopers to get a heavy laser gun up and further suppress her as other Stormtroopers move closer — a textbook case of fires supporting maneuver. The third round again suppresses Shand, but regrettably for Team Empire, loosens the boulder Shand is using for cover, and it falls down the hill and crushes the heavy laser gun and its operator.

Still, the mortar trooper could use some more training

While the mortar trooper’s eagerness to get into the fight is admirable, he sets up his tube without any cover or defilade and is not offset from the axis of the assaulting force. This makes him an extremely easy target (most Stormtroopers seem to share this problem) and he is firing directly overhead of the other Stormtroopers at a target that’s roughly 150 to 200 meters away.

What is completely unforgivable is how he drops the round. Rather than releasing the round and quickly moving his hand down to slap the meaty portion of this thigh, he brings his hand right back over the tube in which he just dropped the round. Milliseconds after the round hits the (presumed) firing pin at the bottom of the tube, the round should have come hurtling out of the tube at a very high velocity and blown his hand off. This is absolutely inexcusable conduct as a mortar trooper (or frankly, any mortarman back here on Earth).

The platoon commander seems like a rookie 2nd lieutenant

The responsibility for the emplacement of the mortar does not rest solely on the mortar trooper. The apparent greenhorn 2nd lieutenant bears plenty of blame for the tactical error of having a mortar firing over the heads of assaulting grunts.

Overhead fire is generally not advisable since mortar rounds sometimes go short, land where they are not supposed to, or have unexpected effects depending on terrain (loosening the heavy-laser-gun-destroying boulder is an obvious case in point). In training, there is a zero percent chance range control would be cool with this, but in combat, a commander weighs risk to force versus risk to mission and makes a call.

Apparently, this boot lieutenant (I am really hoping he is not one of my peers — my platoon sergeant would never let me hear the end of it) of the platoon-sized element is fine with this mortar risk.

And it seems to pay off since this mortar trooper’s accurate fires do not affect friendlies. Clearly this rockstar of a mortar trooper has earned his commander’s trust. This is not to say that the commander is a tactical genius.

Indeed, having once been a lost-in-the-sauce 2nd lieutenant, I can almost guarantee that while the commander appears to be yelling commands with confidence, he is internally panicking about his attack against three defenders going so terribly. He would have had a hard time explaining this complete failure of his mission to his company commander had he not been stabbed to death by Boba Fett.

Everyone nitpicks at Star Wars or Hollywood for things that the producers are not subject matter experts in, so I have tried to keep my qualms to two. The first technical qualm I have is that this trooper seems to have first-round effects. Even the best mortar troopers (and Marine mortarmen) will likely need a round or two to sink the baseplate, since not doing so can dramatically affect where the rounds ultimately land. The motivated mortar trooper also does not seem particularly concerned that the bipods or the tube will move when he completely lets go of it while firing in the handheld.

The second issue is that the rounds appear to be not particularly aerodynamic flat-tipped canisters without fins. Although I’m not a physics expert, I am guessing the flat tip and no fins will cause the round to rotate vertically and horizontally significantly in flight and make it difficult to get accurate rounds on target. Full disclosure: I am making these judgments from observations of how tear gas canisters and 40 mm high explosive rounds are fired from a machine gun in indirect fire mode are fired. Not science.

Why are Stormtroopers using mortars in an era of lightsabers and hyperdrives? Why are the rounds not smart and heat-seeking and therefore immediately accurate? I know the answer: that would not make for a good plot.) Does the mortar trooper have a heads up display in his helmet that does targeting and calculations for him? Are the rounds and the tube made of ultra-lightweight materials that make them easier to carry?

These are a few of the many questions I still have, but overall, I was thoroughly pleased to see a mortar in action in Star Wars. Let’s hope we see more adventures of mortar troopers, and hopefully, see the good guys firing some mortars back in return.

1st Lt. Patrick Cirenza is an 81 mm Mortar Platoon Commander in the U.S. Marine Corps and a graduate of the Army’s Infantry Mortar Leader Course.