“We have quick reaction checklists on paper … but there’s really no time to pull out those checklists.” 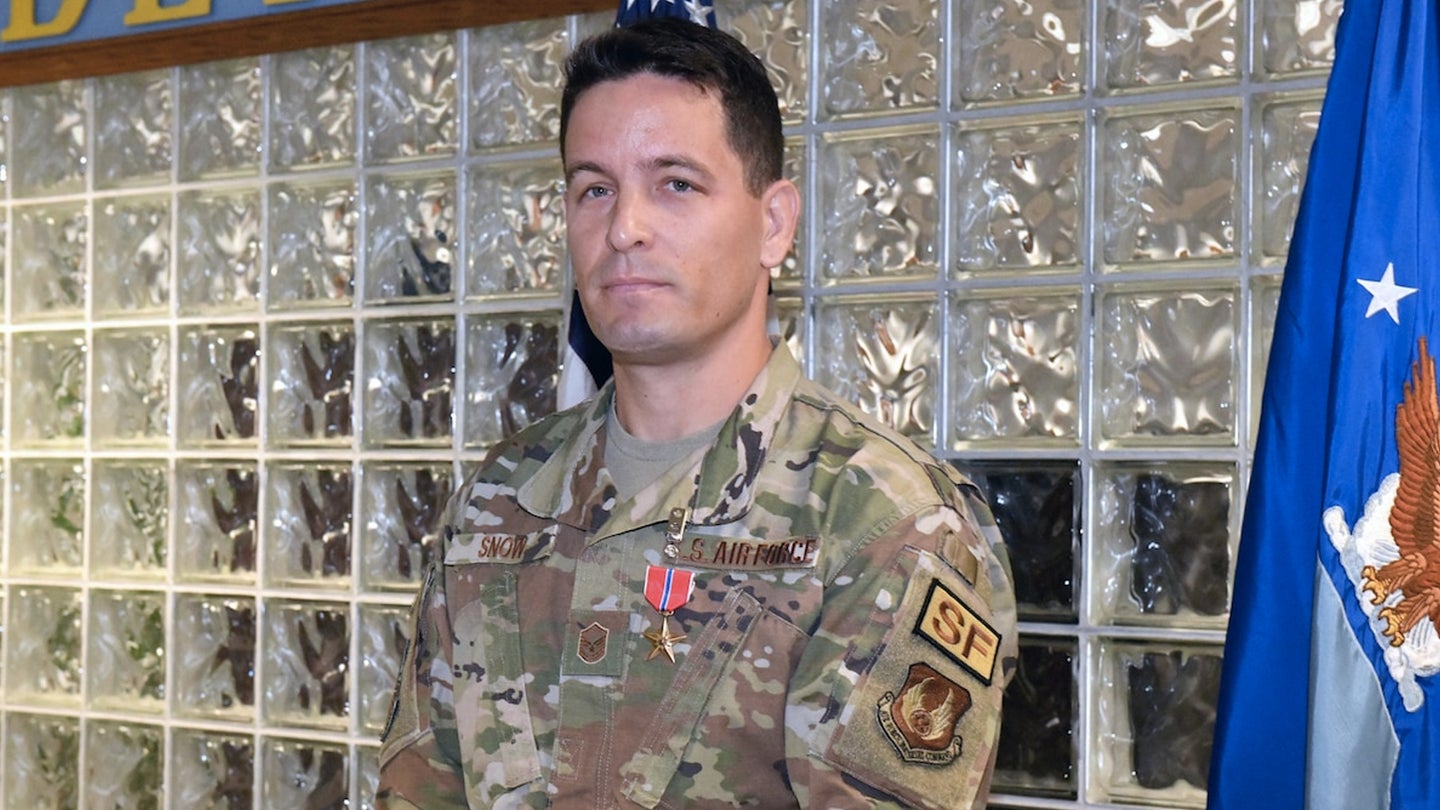 Air Force Master Sgt. Mathue Snow did not have much time to react when his base in Kenya came under attack in the early hours of Jan. 5, 2020.

“We have quick reaction checklists on paper … but there’s really no time to pull out those checklists,” the airman told central Georgia news station 13WMAZ on Friday “You just have to respond and trust your gut.”

Snow was awarded a Bronze Star Medal on Sept. 9 for his efforts defending Camp Simba, a U.S. facility within the larger U.S. and Kenyan base called Cooperative Security Location Manda Bay, Kenya, in January 2020. According to Snow’s award citation, 30 members of Al-Shabaab, an East Africa-based insurgent group, attacked the base and its airfield with rocket-propelled grenades, mortars, and small arms. The attack began when Al-Shabaab fighters hurled indirect fire at Camp Simba while simultaneously launching a ground attack on the airfield about a mile south of Camp Simba, the Department of Defense wrote in an investigation of the attack.

As an Air Force Security Forces member, Snow and his team were charged with defending the base. Security Forces are the Air Force equivalent of military police, and they also receive weapons and tactical training related to base defense.

When the bullets started flying in Kenya, Snow immediately sounded the “giant voice,” an outdoor public address and alarm system, and then told his security forces colleagues to man Camp Simba’s five defense towers. Snow then “mustered, organized and led” a quick response force to respond to the Al-Shabaab attackers at the airfield, according to the Bronze Star citation.

Snow and his team began scouting the airfield until they were attacked with more small arms fire and forced to pull back. The Air Force was not alone in the base defense: a small team of U.S. Marines also moved south from Camp Simba “and made initial contact to assess the situation,” according to the Department of Defense investigation. Together, the Marines, airmen and Kenyan troops “conducted a deliberate and sustained counterattack” to repel the attackers, in which one Marine and one Kenyan military member were wounded.

However, Snow’s work was not over. He went on to expose himself “to grave danger” by leading multiple convoys between the airfield and Camp Simba, according to the citation. Those convoys were crucial in moving in fresh troops and moving out debris and aircraft wreckage so that aircraft could land with reinforcements and then evacuate casualties.

“Through his efforts, the airfield was able to return to mission capable status within two hours of the attack,” the citation read.

Over the next nine hours, American and Kenyan troops cleared the airfield and multiple buildings, according to the Department of Defense investigation. They killed at least six attackers and drove away the rest. Despite their best efforts, the attack took its toll. In the battle’s opening minutes, Army Spc. Henry Mayfield Jr. was killed, as well as American contractors Dustin Harrison and Bruce Triplett. The attackers also destroyed six U.S. aircraft, one Kenyan aircraft, and several vehicles, according to the Department of Defense.

“It could’ve been way worse down range than it was, but we formed together and we took care of what we needed to take care; and we did a great job,” Snow told 13WMAZ.

A 22-year Air Force veteran, Snow said he thought of the Bronze Star as belonging to all his teammates, not just him.

“We had high hopes to have everyone that was involved in some sort of fashion to get recognition throughout the process,” he told 13WMAZ. “The numbers kind of declined.”

Snow said it was difficult for him as a leader to not see his people get recognized, which is why he thinks the Bronze Star belongs to his team.

Snow and his fellow airmen put themselves in great danger to defend their base, but the Department of Defense found many shortcomings in the base’s defensive posture during its investigation of the attack. Army Gen. Paul Funk II said in his executive summary of the investigation that “issues related to force protection, intelligence resourcing and structure, poor Security Forces preparation and training, and mission command all contributed to the outcome of the attack.”

The investigation blamed leaders who visited Manda Bay and tolerated the complacent security situation there, for contributing to the successful attack. The local commanders were also found to be at fault for not enforcing a watchful enough mindset at a base in a Force Protection Condition level “C” country, which is the second-highest risk condition. Examples of the complacency included a fence around the airfield that went uncompleted with no “field expedient” improvements; a lack of intelligence coordination to form a comprehensive threat picture; and inadequate command and control before and during the attack.

Specific to the Security Forces situation, the investigation found that those airmen “were unprepared to respond to the attack,” Funk wrote. There was a lack of effective oversight, made evident by equipment deficiencies such as Security Forces airmen having trouble with their weapons, communications and vehicles. Security Forces airmen also ran only one group training exercise and one tabletop event in the three months before the attack, which a reasonable commander would not find to be adequate preparation, given the many threats that could emerge in a Force Protection Condition level C environment, Funk wrote in the report. On top of that, Security Forces airmen also dropped the ball by not filling enough sandbags, building HESCO barriers, laying concertina wire, clearing overgrown vegetation, or other efforts to beef up the base’s defenses, the investigation found.

The Security Forces response to the attack was also lacking, the investigation found. The noncommissioned officers in charge of supervising the junior enlisted airmen left two tower guards at the airfield without NCO guidance or leadership.

“While engaging the enemy would have been difficult considering issues with communication systems, weapons and vehicles, the evidence remains that several Security Forces personnel on duty at the time did not meaningfully engage Al-Shabaab fighters during the attack,” Funk said.

Still, the investigation found no evidence of criminal negligence or misconduct on the part of leaders on the ground, though Funk did identify “multiple personnel whom I deemed negligent in their actions or inactions, which contributed to creating a vulnerable airfield.

“I concluded that certain senior officers above the O-5 level contributed to the inadequate force protection posture, and, to some extent, allowed a climate of complacency and a poor understanding of the threat,” Funk added.

The general also noted that the worst effects of poor unity of command at the tactical level did not stop “heroic independent and immediate responsive actions of tenant unit personnel and others at Manda Bay.”

The investigation and Snow’s Bronze Star citation seem to paint different pictures of the role of Air Force Security Forces leadership at Camp Simba. When asked about this, the Air Force said that Snow’s actions held up even after a thorough review of the attack by U.S. Africa Command.

“There were many people deserving of the highest honors related to their heroic actions during the attack on Cooperative Security Location Manda Bay, Kenya,” Rose Riley, deputy chief of media operations for the Air Force, told Task & Purpose. “In particular, Master Sgt. Snow’s brave actions in response to the attack met the criteria for being awarded a Bronze Star.”

Riley said that several decorations were put on hold “throughout the investigation and disciplinary process” which ultimately resulted in multiple Defense of Freedom Medals and Exceptional Service Awards going to others who played key roles in defending Manda Bay. Riley also pointed out that the Secretary of the Air Force designated a general officer to serve as a consolidated disposition authority for any disciplinary actions related to the attack. The Associated Press reported in March that eight airmen, ranging from junior enlisted troops to officers below the rank of brigadier general, received administrative punishment following the two reviews of the attack. None of the service members were publicly identified.

Air Force Maj. Gen. Tom Wilcox said at the time that “none of the negligence that we found contributed to the primary cause of the loss of life or damage. However, we did find that they potentially contributed to the outcome, to vulnerabilities on the airfield.”

The same also goes for airmen like Snow, who risked their lives responding to such attacks.

“Hopefully things are better there than they were when we were there,” Snow told 13WMAZ.