The Space Force knows their pants look terrible: ‘We are still working to get the fit right’ 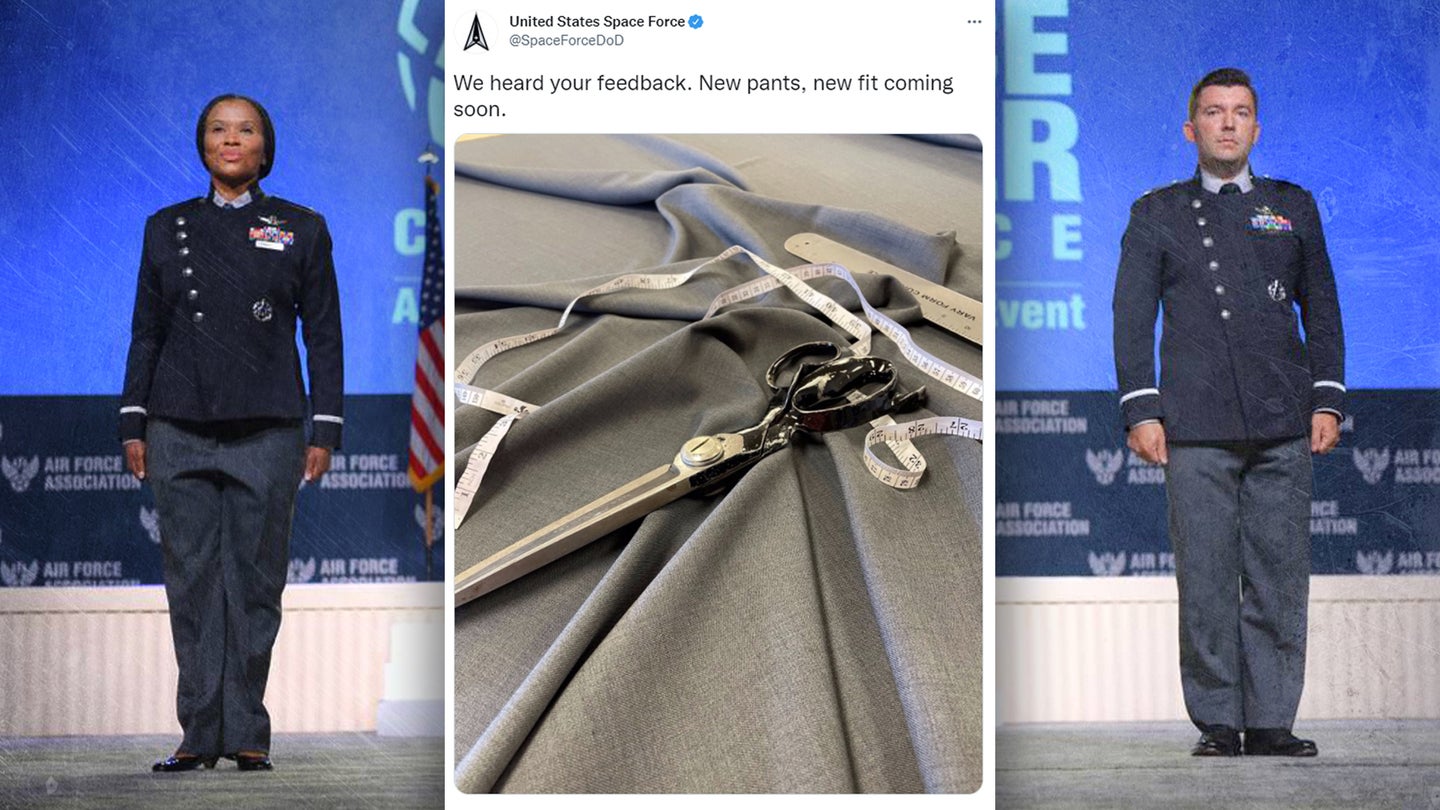 The U.S. Space Force has some of the brightest minds in the military working to keep American satellites safe overhead, but it needs a little more time to work out something closer to home: pants.

Ever since the newest branch of the armed forces unveiled its prototype service dress uniform last month, onlookers have been lambasting the Space Force for taking too many cues from science fiction franchises like Star Trek and Battlestar Galactica.

“The Battlestar uniforms were so much better than this shit,” wrote one commenter on the Air Force subreddit.

“Star Trek did it better,” wrote another.

Even more alarming, the pants of the uniforms unveiled last month were “saggy and baggy and in serious need of tailoring,” wrote New York Times style writer Steven Kurutz. He wasn’t alone in his critique.

“The fit for pants and jacket is ridiculous. It looks like they put both on backwards,” wrote a Reddit commenter.

If you are a Space Force Guardian not feeling great about having to wear this outfit at a formal occasion, there may be some hope. On Friday, the service posted a picture on social media of tailoring scissors and measuring tape placed atop grey fabric resembling that used in the dress pants.

“We heard your feedback,” the branch wrote in the post. “New pants, new fit coming soon.”

When asked about the post, Space Force spokesperson Lynn Kirby emphasized that the service dress uniform unveiled on Sept. 21 “is only a prototype that is still undergoing Guardian feedback,” she told Task & Purpose.

“We released an image of the pants material at the tailor shop to show we are still working to get the fit right and create a service dress uniform that appropriately reflects the identity of Guardians,” she said.

In the coming months, there will also be a “roadshow” where Guardians will get to see the prototype uniform up close and give their feedback, Kirby said. The Space Force will then use that feedback to decide by the end of the year if any tweaks should be made. Next, the service will start a design and alteration process, followed by fit and wear testing in the field, Kirby added.

“We are not able to convey a timeline for when fit and wear testing would begin as that is dependent on production timelines,” she said.

No matter how you feel about the prototype uniform, it is nice to hear that The Space Force is open to feedback from Guardians on how it looks. Other branches like the Army could have used some of that rank and file input before adopting uniform disasters like the Universal Camouflage Pattern — a set of grey pixelated utilities that tried to blend in with everything and, as a result, blended in with nothing.

The Navy also had a wardrobe malfunction when it realized its blue Navy Working Uniform (nicknamed “blueberries”) lights up like a candle when put in contact with fire, which made it unsuitable for shipboard use. The Air Force too had buyer’s remorse with the tiger-striped patterned airman battle uniform, which one airman described as heavy, thick, hot and stuffy, and another said was “about as stylish as a fat collar and polyester bell-bottoms.”

These past examples show that the government doesn’t need your opinion when selecting a uniform you’ll be forced to wear every day of your life, but the Space Force seems to be doing just that with its service dress.

Of course, only time will tell how much of that feedback the service actually applies to its dress uniforms. Until then, we can only hope they’ll look like this: