After years of research and a modest price tag, the Marine Corps has decided to scrap its headless robotic mule.... 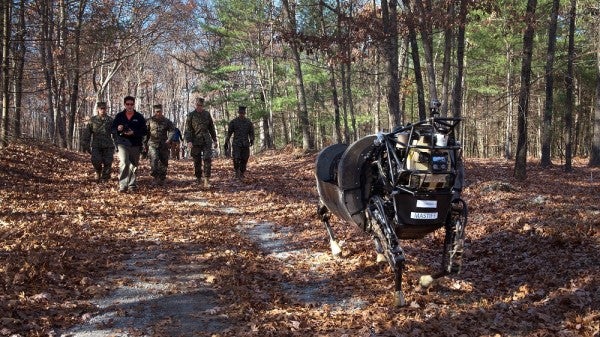 After years of research and a modest price tag, the Marine Corps has decided to scrap its headless robotic mule. Officially called the Legged Squad Support System, or LS3, the robot was designed to lighten Marines’ loads while out on patrol, reports Hope Hodge Seck for Military.com.

The LS3 has gone through many changes since the Defense Advanced Research Projects Agency, or DARPA, teamed up with the Marine Corps Warfighting Lab in 2010 to create a machine that could function autonomously and haul 400 or more pounds of weight.

In 2013, a second contract worth nearly $10 million was awarded for an additional phase of the program that would demonstrate how the robot would follow troops on foot through rugged terrain, carrying their gear and interpreting verbal and visual commands.

The latest iteration of the LS3 is the brainchild of DARPA and Google Inc’s Boston Dynamics and came about through a two-and-a-half year old contract costing $32 million, writes Seck.

The robotic horse got its major debut in 2014 during the Rim of the Pacific, the largest military exercise in the Pacific region. While the system proved it could follow commands and cross rugged ground, its shortcomings were also highlighted.

“As Marines were using it, there was the challenge of seeing the potential possibility because of the limitations of the robot itself,” Kyle Olson, a spokesman for the Warfighting Lab, told Military.com in reference to the loud lawnmower sound that the robot makes. “They took it as it was: a loud robot that's going to give away their position.”

Additionally, the robotic mule doesn’t have a set place in dismounted patrols and troop movements, and while the idea of having a robot shoulder part of a Marine infantryman’s burden sounds very appealing, it just isn’t practical. Yet.