From the moment prospective Marines step onto the yellow footprints painted on the deck at boot camp, they’re inundated with... 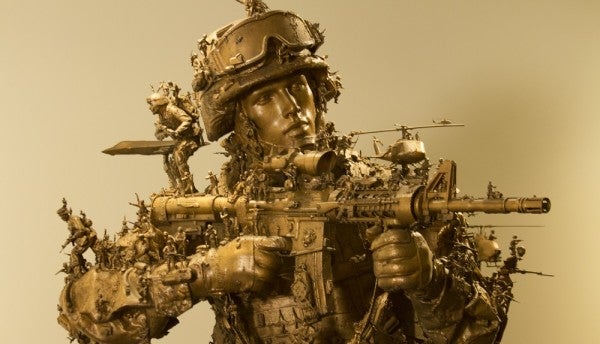 From the moment prospective Marines step onto the yellow footprints painted on the deck at boot camp, they’re inundated with two centuries of heroic deeds and sacrifices made on beacheads and in jungles, city streets, and deserts across the globe. The reasoning is pretty simple: Marines are their history.

That’s the message behind three statues that were unveiled Dec. 12 at the National Museum of the Marine Corps.

A drill instructor figurine, part of a much larger statue, holds a steady salute on its day of unveiling at the National Marine Corps Museum in Triangle, Virginia, Dec. 13, 2017.

“Every Marine walking the planet is sort of an amalgam of all the Marines who have come before,” Gunnery Sgt. Justin Kronenberg, a spokesman with Marine Corps Recruiting Command, told Task & Purpose. The statues, which took seven months to construct, include two wall mounts and a 7-foot-tall Marine, cast in bronze and ready for battle, armed with a 242-year-old history.

The statues are part of the service’s brand campaign, “Battles Won,” which launched earlier this year and frames the Corps' mission — training leathernecks, kicking tail on the battlefield, and returning quality citizens to their communities — as a series of struggles to be overcome.

At Their Core, one of three of Marine Corps Recruiting Command’s statues, is unveiled at the National Marine Corps Museum in Triangle, Virginia, Dec. 13, 2017.

“The mentality of a Marine is selflessness, camaraderie, brotherhood and kinship — all working together and fighting to the death for your fellow man,” Kris Kuksi, the sculptures’ creator, said in a Marine Corps statement. “I wanted to capture the fighting spirit.”

Waged in Will, one of three of Marine Corps Recruiting Command’s statues, is unveiled at the National Marine Corps Museum in Triangle, Virginia, Dec. 13, 2017.

Using building blocks, model kits, and 3D-printed accessories, Kuksi fashioned the weapons, uniforms, and machinery with meticulous attention to detail — the Corps’ arsenal even gets a hat-tip on the largest sculpture, “At Their Core,” with a mix of vehicles, aircraft, and weapons.

The idea of a multitude-containing Marine, one whose body is composed of jarheads and their battles dating back to the Corps earliest days, was the inspiration for both the real-life statue, and the digital rendering seen in the service’s commercial, “Anthem.”

“The totality of that mixed-media assemblage, when you take it in all at once, the first thing that you recognize is the modern-day Marine,” Kronenberg said. “But as you draw closer, you realize that modern-day Marine is made up of all the historical Marines that came before, and that’s kind of how it is.”