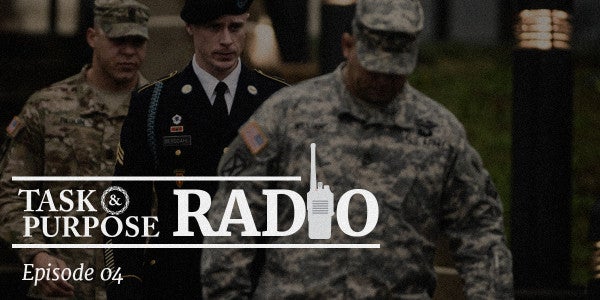 In this week’s episode of Task & Purpose Radio — “The Stuff Of Conspiracy Theories” — Lauren Katzenberg, James Weirick, and Nate Bethea review Sarah Koenig’s recent interview on The New Yorker Radio Hour and her refusal to discuss the terms under which Bowe Bergdahl’s agreed to talk with Mark Boal. Does the audience deserve more transparency?

Also, the hosts discuss the latest episode of Serial and how Bergdahl’s ability to survive five years of captivity under the Taliban will impact his court-martial.

They additionally question the origin of all the hatred publicly direct at Bergdahl and whether it needs to be represented in the Serial series.

As an added bonus, we couldn’t resist sharing Weirick’s outtakes from when he was setting up his mic and thought no one was listening.

Download episode four, “The Stuff Of Conspiracy Theory,” on iTunes. Also, subscribe so you never miss an episode.

You can also listen to the podcast on Soundcloud below, or access it on iTunes.

Don’t forget to leave us a review and let us know what you think of Task & Purpose Radio.

Listen to episode one here.