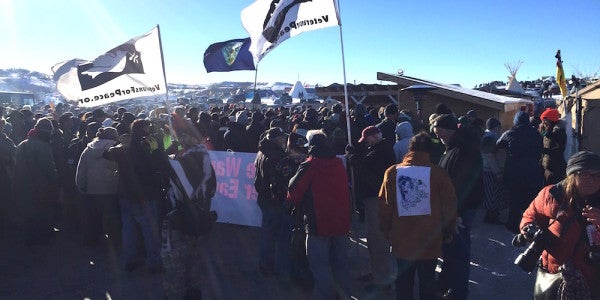 “Today, the US Army Corps of Engineers announced that it will not be granting the easement to cross Lake Oahe for the proposed Dakota Access Pipeline,” Standing Rock Sioux Tribal chairman Dave Archambault II said in a statement. “Instead, the Corps will be undertaking an environmental impact statement to look at possible alternative routes.”

The Army's assistant secretary for civil works, Jo-Ellen Darcy, also made an announcement on Sunday, saying, “Although we have had continuing discussion and exchanges of new information with the Standing Rock Sioux and Dakota Access, it's clear that there's more work to do. The best way to complete that work responsibly and expeditiously is to explore alternate routes for the pipeline crossing.”

Sunday, Dec. 4, marks the first day of the Veterans Stand For Standing Rock muster that garnered national attention over the last week, after a GoFundMe raised more than $1 million to support thousands of veterans who committed to join the ongoing protests in North Dakota. According to Veterans For Standing Rock spokesman Anthony Diggs, who addressed protestors Sunday afternoon, more than 2,400 veterans were registered at the protest camp as of 4:45 pm Eastern Standard Time.

“The vets all coming here to support this cause was amazing,” James Raven Miller, a psychologist and Coast Guard veteran, told Task & Purpose. He drove to Standing Rock from Boulder, Colorado, with a group of fellow veterans. “I’m proud of the fortitude we all showed in taking time out of our lives to stand up for something more than ourselves.”

57-year-old Jim Pardilla, a Penobscot Indian originally from Indian Island, Maine, arrived at Standing Rock on Thursday, but his family has been protesting since August. Task & Purpose asked him about the feeling in the camp with the arrival of veterans over the past few days.

“The vets are coming from all over,” Pardilla told Task & Purpose. “We’re all on the same page. Marines, Air Force, Navy. And the camaraderie — I haven’t seen that since I left the service. Brother were holding each other, crying.”

Pardilla added that he saw two guys reconnect who hadn’t seen each other since Vietnam. “It was moving.”

The veterans muster was organized by Army vet Wesley Clark Jr. and Marine vet Michael A. Wood Jr., who formed Veterans Stand For Standing Rock last month with the hope of drawing scores of former service members, as well as fire fighters, ex-law enforcement officers, emergency medical personnel and others to the site. Following Task & Purpose's coverage of Clark Jr. and Wood Jr., their mission went viral, receiving national coverage and more than $1 million in donations.

Clark Jr. met with approximately 250 veterans at Standing Rock on Sunday telling them that tribal elders had asked the veterans do not directly engage in the protests. “If we come forward, they will attack us,” Clark said, according to The Associated Press. Instead, he told the veterans, “If you see someone who needs help, help them out.”

Now that the Army has halted construction, it is unclear if the veterans will stay for the duration of the muster, which was supposed to last until Dec 7. While some veterans were leaving the camp on Sunday afternoon, many others were still trying to enter.

More are still trying to get into the camp. Looks like about a mile-long line now #VeteransforStandingRock

According to Pardilla, there is still a veterans march scheduled for Monday to Backwater Bridge, where they will say a prayer and march back.

The Standing Rock Sioux Reservation, which spans the border of North and South Dakota and is home to members of the Lakota and Dakota nations (known collectively as Sioux). It has been the site of an increasingly tense standoff between law enforcement-backed security contractors and activists since July, when the U.S. Army Corps of Engineers approved a plan to build one of the final segments of the 1,170-mile Dakota Access Pipeline on land adjacent to the reservation. According to the Standing Rock Sioux, the planned route, which will cross beneath the Missouri River, threatens their drinking water supply and will destroy sacred sites and burial grounds located on land that the government stripped from the Sioux in the past.

Task & Purpose’s Adam Linehan, Russell Midori, and Marty Skovlund Jr. are on the ground at Standing Rock. We will continue to update this story as we gather more information.