President Donald Trump announced a “historic” increase in military spending on Monday, calling it a “landmark event,” and saying that... 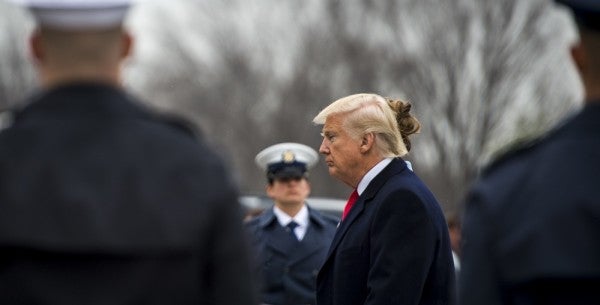 President Donald Trump announced a “historic” increase in military spending on Monday, calling it a “landmark event,” and saying that in such dangerous times, the military should have the tools it needs to fight and “only do one thing: Win.”

“This is a landmark event and message to the world in these dangerous times, of American strength, security and resolve,” Trump said, according to Reuters. “We must ensure that our courageous servicemen and women have the tools they need to deter war and when called upon to fight in our name, only do one thing: Win.”

The defense budget increase, which Trump plans to formally propose during a joint session of Congress on Tuesday night, is close to 10%, and amounts to about $54 billion. Trump plans to boost the Pentagon’s budget by cutting funding to domestic programs and foreign aid.

Related: Happy Mattis Day: The Plan To Defeat ISIS Is Due Today »

“We are going to do more with less and make the government lean and accountable to the people,” Trump said on Feb. 27. “We can do so much more with the money we spend.”

White House budget officials announced the proposed spending increases the same day that Secretary of Defense Jim Mattis was expected to brief the president on the details of a plan to Defeat the Islamic State in Iraq and Syria.

There are concerns that cutting funding to administrations like the State Department, which could see as much as one-third of its budget slashed, would do more harm to national security than any good that might come from then funneling those resources to the defense department. According to Reuters, more than 120 retired U.S. generals and admirals urged Congress on Feb. 27 to fully fund U.S. diplomacy and foreign aid, saying that “elevating and strengthening diplomacy and development alongside defense are critical to keeping America safe.”