Introducing the Chief Master Star-geant of the Space Force. 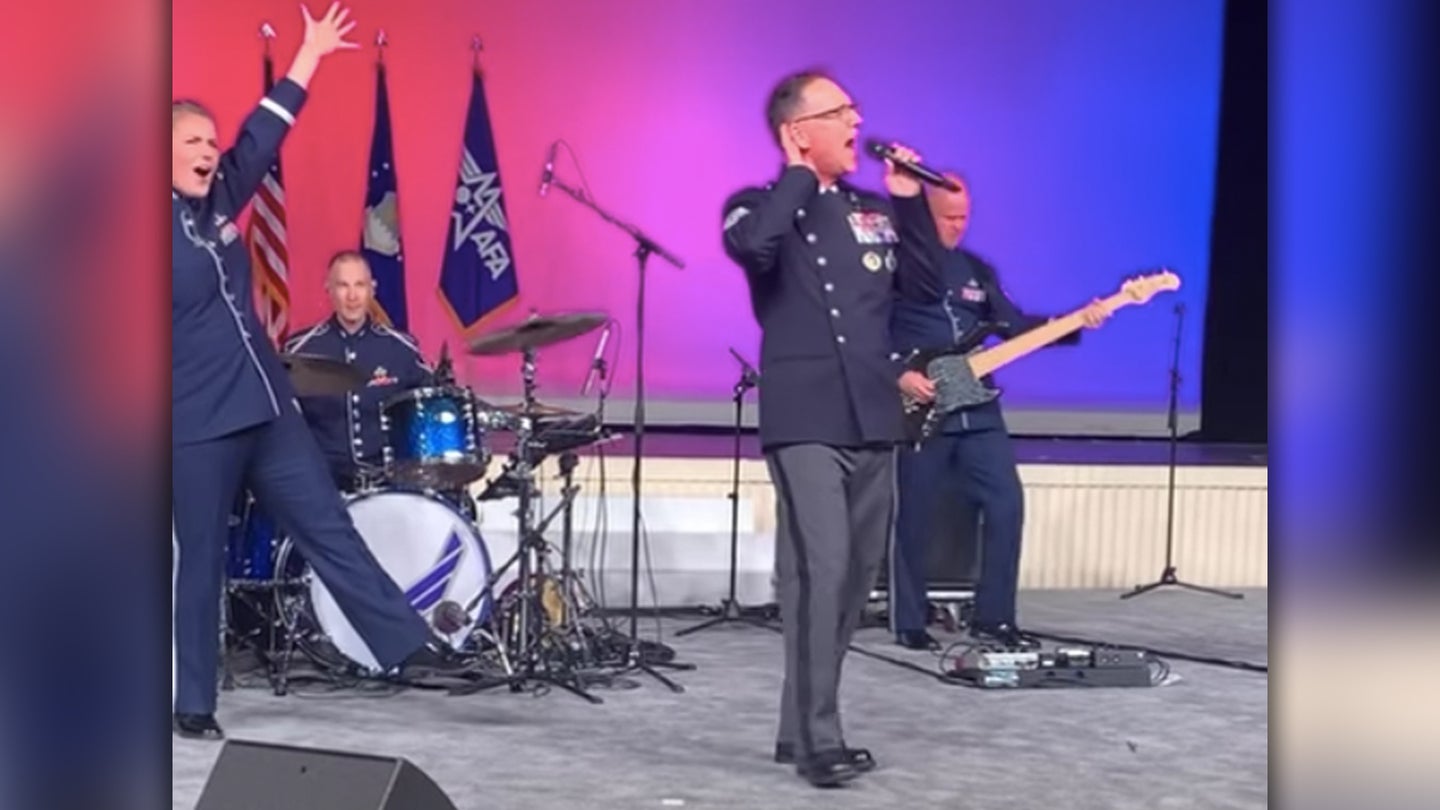 When he unveiled the Space Force’s official song on Tuesday, Chief of Space Operations Gen. John Raymond said  “it’s easily singable, even by people that cannot sing, and trust me, you won’t hear me sing.” But whatever the general’s shortcomings may be in the voice department, his enlisted second, Chief Master Sgt. of the Space Force Roger Towberman, more than makes up for it, as the guardian demonstrated on Wednesday at the conclusion of the Air & Space Forces Association’s Air Space & Cyber Conference at National Harbor, Maryland.

In a video posted to the Facebook and Instagram pages of Chief Master Sgt. of the Air Force JoAnne Bass, Towberman showed he has a great set of pipes to match his shoulder stripes by belting out the chorus of the 1981 anthem “Don’t Stop Believin” by Journey. Towberman, who is much loved by social media commenters, received a round of applause on those forums.

“Multi-capable!” wrote another, referring to the Air Force’s multi-capable airmen concept, which requires that airmen take on a range of roles in order to operate in a conflict without their usual large support bases.

The performance took place just a day after Towberman and the writer of the Space Force song, a former airman named James Teachenor, took a conference hall full of people through a tutorial on how to properly sing it. Towberman said his public affairs team was nervous about the idea.

“‘We’re afraid it might not resonate with all groups,’” Towberman recalled them saying in his keynote address. “I said ‘first of all, my brand is crazy so I literally can’t go off-brand, like I’m good. And second of all I’m not afraid of anything.’”

Keep in mind that the Air, Space & Cyber Conference is the biggest conference of the year for the Air and Space Forces, filled with star-studded generals, titans of the aerospace industry and thousands of service members from both the U.S. and from foreign militaries around the world. This year’s event was the largest ever, with 16,000 registrants and standing-room only at several of the speaker panels. To warm up, Towberman and Teachenor got the crowd to sing the Air Force song, followed by the Space Force song. Towberman seemed pleased with the result.

“That’s great, right?” he said. “When your brand is crazy, you can’t go out of bounds.”

In his keynote address, Towberman reemphasized the Space Force’s commitment to taking care of its members in new ways that have not really been done before in the military. That commitment was codified in documents like The Guardian Ideal, a 26-page statement of values released last September which emphasizes an “approach to talent management that integrates and strengthens equity, development, and human dignity.”

“We have to be retention focused,” said Towberman in his keynote speech on Tuesday, after pointing out that there are currently more steps to request child care in the military than there are to leave the service. “And that means that no one has a reason to quit. It can’t be easier to leave than it is to get help.”

Some of the ways the Space Force hopes to make that commitment real is by giving guardians more agency in where to take their career and their families, so they don’t feel like just a cog in a machine.

“We’re really trying to tailor solutions at that individual level,” Towberman told reporters on Tuesday. “Some people might say ‘we’re moving to a faraway location, I don’t feel it’s in the best interest of my loved ones, of me. What can you do?’ We’ll listen, we’ll have that conversation, and what we’re finding is that when you open up that aperture and give lots of people choices, then you can regulate the market, and find somebody who’s like ‘that’s my jam, I’ll go.’

“By taking labels off of people … letting human beings make informed decisions … [they say] ‘I feel invested in as a guardian,’” he added.

In keeping with that emphasis on the individual, in March the Space Force announced that it plans on ditching the annual, one-size-fits-all physical fitness tests used by other services in favor of a “holistic health and fitness program” where guardians sport wearable health and fitness trackers. The goal is not to just help guardians run a mile in a certain time, but to help them get the right amount of sleep and nutrition so that they are healthy in a holistic sense. The Space Force also announced in May that it would allow guardians to sport neck tattoos, as long as the tattoos are not larger than an inch and stay on the back of the neck, according to Air & Space Forces Magazine.

The new branch’s emphasis on diversity appears to be paying off. This year’s pool of new guardians is 30% female, which Maj. Gen. Edward Thomas Jr., the head of the Air Force Recruiting Service, told reporters on Wednesday is significantly above” any other military service right now.

The Space Force is still less than three years old, so it remains to be seen how impactful and long-lasting these commitments end up being. But if commenters on social media — a notoriously cynical place — are noticing, then maybe it has a shot.

“USSF leadership is honestly probably the most forward-looking and people-oriented command team I’ve seen at the helm of a military service to date,” wrote one commenter last month on the unofficial Space Force subreddit.

“That’s exactly what I saw and heard,” said another. “Can’t wait to remain terribly jealous of y’all going forward.”

Gen. John Raymond, the head of the Space Force, is due to retire later this year, but as long as Towberman is still around, he’ll probably keep singing the people-first tune he’s singing now.

“I don’t think the atomic bomb is an advantage over adversaries like the enlisted force of this nation,” Towberman said in his keynote. “We’ve got to lean into that, we’ve got to take care of people.”