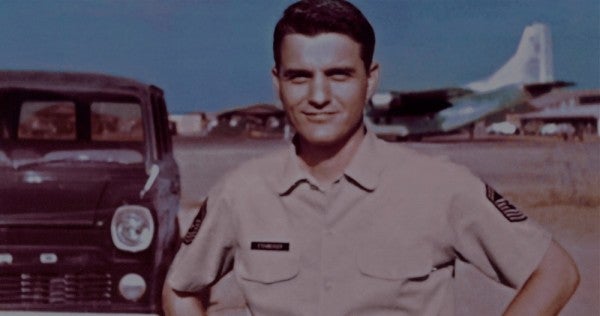 Etchberger was part of a secret CIA operation in Laos. Due to the mission’s secrecy, and its questionable legality, Etchberger’s own family knew little of the details of his death — only that he lived and died a hero. It wasn't until 1998 that the details of the mission were finally declassified, and a reevaluation of the Air Force Cross he had originally been awarded was ordered.

On Sept. 21, 2010, 42 years after Etchberger's death, President Barack Obama posthumously awarded him the Medal of Honor.

Etchberger’s story will now be told in an upcoming episode of Netflix’s documentary series, Medal of Honor, which debuts on Nov. 9. Etchberger is one of eight service members awarded the nation’s highest commendation for valor whose incredible lives and deeds the show chronicles.

A radar technician and 17-year veteran of the Air Force, Etchberger was handpicked to lead a team of technicians for a CIA op in Laos. The mission: To call in airstrikes on the Ho Chi Minh trail, a supply route used by North Vietnam to smuggle troops and equipment through Laos and Cambodia into South Vietnam.

First, Etchberger and his fellow airmen needed to undergo a process known as “sheep dipping.” They were released from military service and hired by Lockheed to avoid implicating the U.S. government in combat operations in Laos. When the mission was over, they would return to active duty, according to a September 2010 Air Force statement.

On the evening of March 10, 1968, the North Vietnamese launched an assault on the isolated camp, bombarding it with rockets, mortar and artillery fire. North Vietnamese troops scaled the mountainside, and by the 3 a.m. the base was overrun.

During the shelling, Etchberger and and his radar team had taken refuge on a small ledge that overlooked a steep drop into the valley below. After the North Vietnamese took the outpost, they discovered Etchberger and his team on the cliffside.

Grenades and incoming fire began raining down on the airmen, and within moments every member of Etchberger’s team was either grievously wounded or dead. But Etchberger remained miraculously unharmed.

Though he had “little or no combat training,” according to his Medal of Honor citation, Etchberger single-handedly held off the enemy assault, while at the same time calling in air strikes and a medevac.

With only an M-16 and a survival radio — Etchberger held that ledge for hours.

When the rescue helicopters arrived in the early morning, Etchberger repeatedly exposed himself to enemy gunfire as he raced to place the survivors of the attack into rescue slings to be hoisted one-by-one to safety.

It was only after the three surviving airmen were accounted for that Etchberger allowed himself to be hoisted up — and that’s when he was shot, and mortally wounded.

For conspicuous gallantry and intrepidity in action at the risk of his life above and beyond the call of duty. Chief Etchberger and his team of technicians were manning a top secret defensive position at Lima Site 85 when the base was overrun by an enemy ground force. Receiving sustained and withering heavy artillery attacks directly upon his unit's position, Chief Etchberger's entire crew lay dead or severely wounded. Despite having received little or no combat training, Chief Etchberger single-handedly held off the enemy with an M-16, while simultaneously directing air strikes into the area and calling for air rescue. Because of his fierce defense and heroic and selfless actions, he was able to deny the enemy access to his position and save the lives of his remaining crew. With the arrival of the rescue aircraft, Chief Etchberger, without hesitation, repeatedly and deliberately risked his own life, exposing himself to heavy enemy fire in order to place three surviving wounded comrades into rescue slings hanging from the hovering helicopter waiting to airlift them to safety. With his remaining crew safely aboard, Chief Etchberger finally climbed into an evacuation sling himself, only to be fatally wounded by enemy ground fire as he was being raised into the aircraft. Chief Etchberger's bravery and determination in the face of persistent enemy fire and overwhelming odds are in keeping with the highest standards of performance and traditions of military service. Chief Etchberger's gallantry, self-sacrifice, and profound concern for his fellow men at risk of his life, above and beyond the call of duty, reflect the highest credit upon himself and the United States Air Force.