"It’s been a long journey to this day for these heroes and their families." 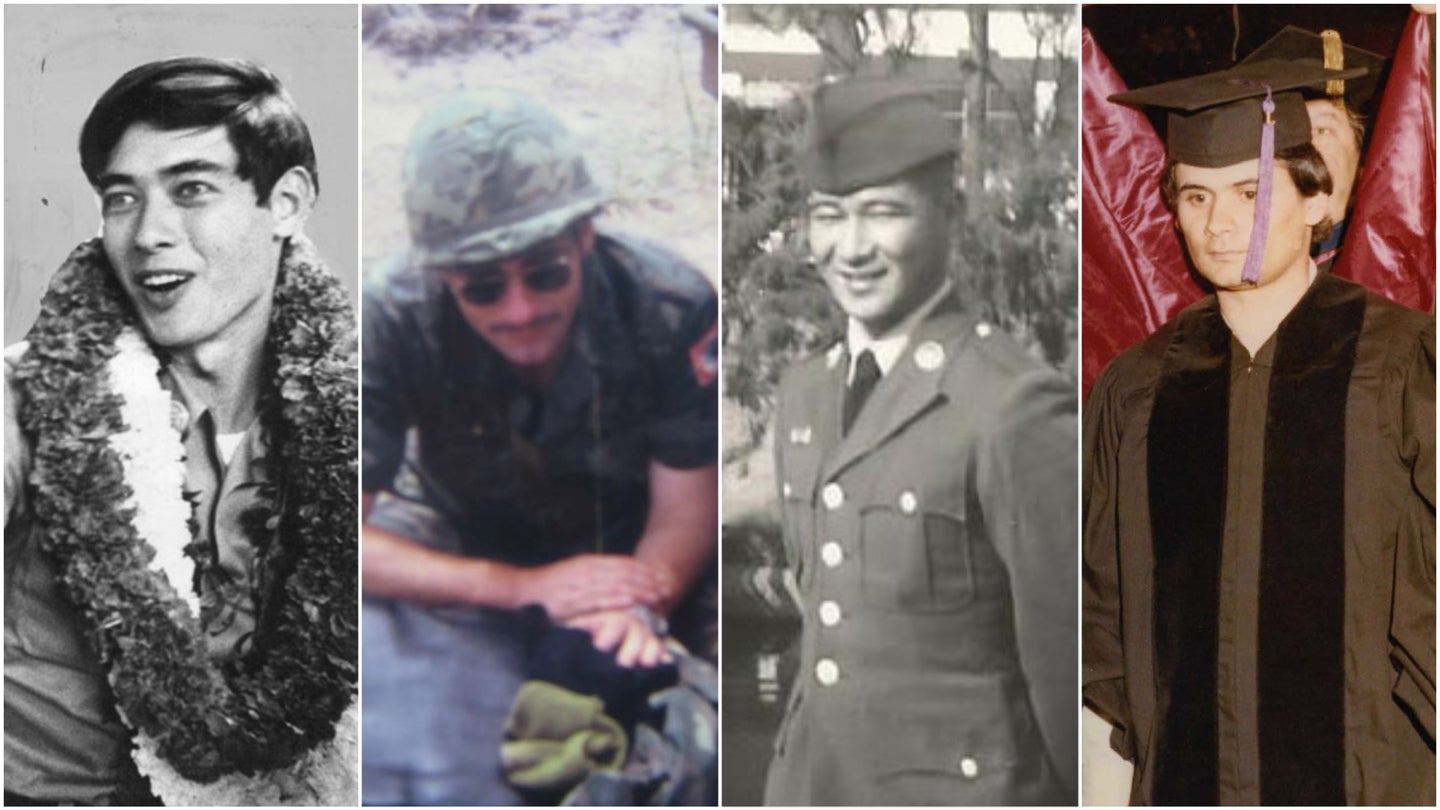 50 years after their heroic and selfless actions, four U.S. Army veterans of the Vietnam War were awarded the Medal of Honor on Tuesday at The White House in an event that President Joe Biden said was “setting the record straight.”

“It’s been a long journey to this day for these heroes and their families. More than 50 years have passed — 50 years since the jungles of Vietnam, where as young men these soldiers first proved their mettle,” Biden said. “But time has not diminished their astonishing bravery or selflessness in putting the lives of others ahead of their own, and the gratitude that we as a nation owe them.”

The four veterans recognized with the nation’s highest award for combat valor are Maj. John Duffy, Spc. 5 Dennis Fujii, Spc. 5 Dwight Birdwell, and Staff Sgt. Edward Kaneshiro, who was killed in action in March 1967. Though they were honored for different actions during the war, all had a common theme: putting themselves in harm’s way to protect fellow soldiers and allies.

According to battle narratives provided by the Army, Kaneshiro, an infantry squad leader with Troop C, 1st Squadron, 9th Cavalry Regiment, 1st Cavalry Division, and his soldiers were ambushed by enemy forces in 1966. They were scouting open terrain near a village in the Kim Son Valley when entrenched enemy forces “erupted with machine gun and small-arms fire” against Kaneshiro’s squad and another squad, killing two and wounding four others. After ordering his man to cover, Kaneshiro “crawled forward to attack the enemy force alone,” jumping into their trench and taking down the enemy one by one.

His heroism “enabled the orderly extrication and reorganization of the platoon,” said the battle narrative, “which was the beginning of a larger action that ultimately led to a successful withdrawal from the village.”

While Kaneshiro was considered for the Medal of Honor in 1966, Naomi said on Sunday that he never told his family. The media “came to our house to speak to our mother,” she said, but their mother “didn’t even know anything about it.” She said her father was “very quiet and humble,” and he considered what he did to simply be his job. He was later killed in action on March 6, 1967.

Two years after Kaneshiro’s heroic actions, Birdwell, a citizen of the Cherokee Nation who joined the Army in 1966, was at the Tan Son Nhut Airbase near Saigon in 1968 when enemy forces assaulted the base. He and his unit, Troop C, 3rd Squadron, 4th Cavalry Regiment, 25th Infantry Division, “bore the brunt of the initial attack,” which destroyed many of their vehicles and incapacitated Birdwell’s tank commander, the battle narrative said. After moving the commander to “a place of safety,” Birdwell jumped into his place in the tank commander’s hatch and began laying down machine-gun fire against the enemy.

After firing all of the available ammunition, Birdwell found two machine guns and ammunition in a downed helicopter nearby. Firing at the enemy, Birdwell “refused evacuation and moved amongst the disabled vehicles and defense positions,” grabbing ammunition and handing it out to other soldiers. He then led a group of soldiers past the enemy force and used hand grenades to stop their assault. Even after reinforcements arrived, Birdwell “aided in evacuating the wounded until he was ordered to seek attention for his wounds,” the narrative said.

Birdwell earned a Bronze Star, two Purple Hearts, and two Silver Stars throughout this service. One of those Silver Stars stemmed from his heroic actions in January 1968, which garnered a recommendation for the Medal of Honor by then-Lt. Col. Glenn Otis. Birdwell said Otis never stopped pushing for the Silver Star to be upgraded to the Medal of Honor until he passed away in 2013.

“I’m grateful for all you have given to our country,” Biden told Birdwell. “And at long last, at long last, your story is being honored as it should have been always.”

The third Medal of Honor recipient, Fujii, was assigned to the 237th Medical Detachment, 61st Medical Battalion, 67th Medical Group in 1971. He was serving as the crew chief of a helicopter ambulance during rescue operations in Laos and Vietnam, tasked with evacuating “seriously wounded Vietnamese military personnel from the midst of a raging battlefield.” During one such rescue attempt as the helicopter was landing, a “barrage” of enemy fire caused the helicopter to crash.

Fujii was injured, and when a second helicopter arrived to complete the rescue, he was unable to board because the enemy was directly firing at him. He waved off the helicopter to leave him behind, and after securing a radio, he told other crews in the area it wasn’t safe for them to come back to get him.

“Fujii remained as the lone American on the ground, treating the injuries of South Vietnam troops throughout the night and the next day,” the battle narrative says. The next evening, however, Fujii and the South Vietnamese troops were attacked by the enemy. Over 17 hours, the battle narrative said, he “repeatedly exposed himself to hostile fire” in order to help direct air strikes on them. For two more days, Fujii “bore the responsibility for the protection and defense of the friendly encampment,” until a helicopter was finally able to get to the area and evacuate him for medical assistance.

Biden recalled that after the battle while speaking to the press, Fujii “downplayed his own contributions” and instead pointed to the skills of the South Vietnamese troops he fought alongside. Fujii told reporters at the time, “I like my job. I like to help other people who need help,” Biden said.

A year later in April 1972, Duff was assigned to the 5th Special Forces Group and serving as a senior advisor to the Army of the Republic of Vietnam’s 11th Airborne Battalion, 2nd Brigade, Airborne Division. The battalion command post was surrounded by enemy forces, and despite multiple injuries, Duffy refused to be evacuated and maneuvered around enemy anti-aircraft positions to call in air strikes. He “remained in an exposed position to direct gunships on enemy positions” throughout an artillery bombardment, and facilitated the evacuation of other wounded partner forces.

The enemy eventually began a ground assault on the position, which Duffy said on Sunday included him and South Vietnamese partner forces. Duffy “moved from position to position to adjust fire, spot targets for artillery observers, and, ultimately, to direct gunship fire” on a compromised friendly position throughout the assault, the battle narrative says. The next morning, the enemy ambushed Duffy and his battalion; while being pursued by the enemy, Duffy led soldiers wounded in the assault to an exfiltration site. He refused to board a helicopter until all other evacuees were already on board.

Throughout the battle, Duffy felt he was just doing his job.

“You execute what you’ve been trained, and I was well trained,” he told Task & Purpose on Sunday. “It was a matter of making decisions. There were a lot of decisions because it was a long battle. But at the end, we were able to bring some survivors out which stopped the enemy for close to two weeks, and delayed them for four weeks … so I thought we all did a good job.”

On Sunday, Duffy, Birdwell, and Kaneshiro’s children told Task & Purpose that they all received word of the award on May 31 from separate phone calls with President Joe Biden.

“It was an overwhelming experience of joy,” Birdwell said. “And quite an honor to be able to talk to the President of the United States. I know he had so much to do yet took out some time to call me, and knew quite a bit about me. … I will never forget that phone call.”

Birdwell, like Duffy, knew that the announcement of their Medal of Honor was coming; their cases had been in the works for years. But Naomi, Kaneshiro’s daughter, said they hadn’t heard anything in decades. Their family was first notified that Staff Sgt. Kaneshiro was considered for the award in 1966, but despite two attempts to get more information in 1990 and 2011, they didn’t hear that it was officially under review until April this year.

Naomi said they learned her father’s actions were under review for recognition just two weeks after their mother passed. According to Kaneshiro’s biography, when he was killed he left behind his wife and five children, the youngest of which was just four months old. Naomi said her mother was just 35 years old when she lost her husband, and her grief was “so profound” that she rarely spoke about him as her children grew up. Instead, they learned about their father through newspaper articles and relatives.

When they get the call in April, Naomi said they first thought “it was some sort of hoax.” But they eventually believed it was real.

“Our whole family is over the moon,” Naomi said.

The ceremony was held just a day after Independence Day, which Duffy said was a fitting day to recognize the heroism of military service members. Birdwell agreed, and encouraged young men and women to “take a hard look” at military service, which he said is “well worth the effort.”

Kaneshiro’s daughter, Naomi, said that while most think of fireworks and barbecues on the 4th of July, she hoped it would also be taken as a time to “think about America.”

“Maybe for the younger generation, this will inspire them to be proud to be an American … even though there are differences of opinions today in this country, hopefully, it will inspire people to come together.”