James Mattis just got married in the most Marine way possible

“Not surprising for a Marine, the couple met in a bar.” 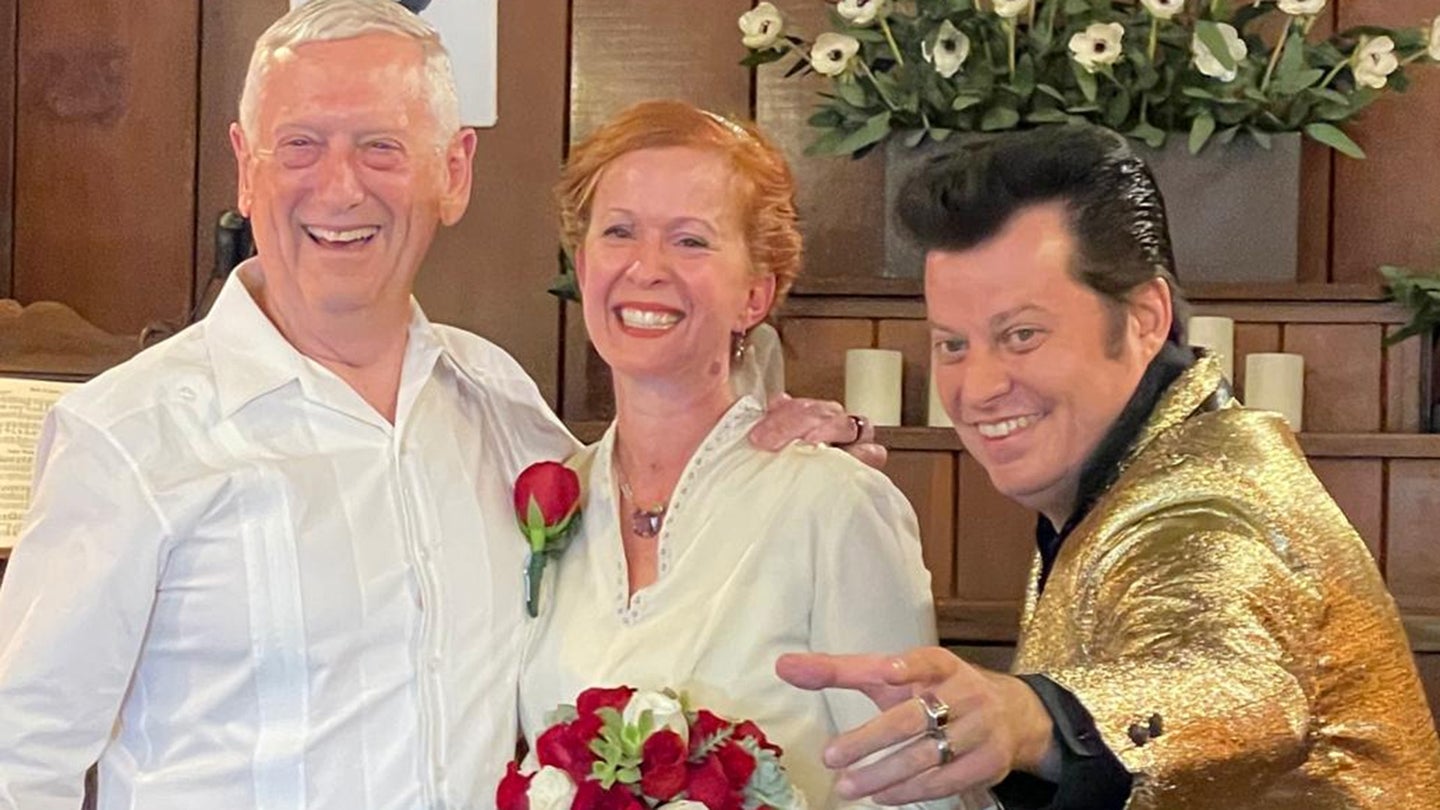 Retired Marine Gen. James Mattis has finally gotten married after decades of putting his devotion to the Marine Corps and the rest of the U.S. military above his personal life. And he did it in the most Marine way possible:

Mattis, who served as defense secretary from January 2017 until December 2018, wed physicist Christina Lomasney on Saturday, Garrett Ross of Politico first revealed. The couple were reportedly married by a priest and then they had a second ceremony at Las Vegas’ Little Church of the West that involved an Elvis impersonator in which Retired Navy Vice Adm. Robert Harward was the best man. Politico posted pictures of both events.

“Not surprising for a Marine, the couple met in a bar,” Politico reported. “The reception for friends and family was at The Palazzo at Rosina.”

Mattis has long eschewed matrimony so he could be completely focused on the profession of combat arms. He was once engaged to a woman who asked him to leave the Marine Corps for her, Dexter Filkins wrote for the New Yorker in 2017. Mattis initially agreed to resign, but his friends talked him out of it and the woman ultimately called the wedding off just three days before the ceremony.

Years later, Mattis – then a brigadier general – decided to be the duty officer on Christmas so that a young major didn’t have to spend the holiday away from his family.

“I’m a bachelor and I thought, ‘Why should the major miss out on the fun of having Christmas with his family?’ And so, I took the duty for him,” former Marine Commandant Gen. Charles Krulak recalled Mattis telling him at the time.

Mattis was – and remains – wildly popular with Marines. His trademark “knife hand” has become a celebrated gesture within the Marine Corps, so much so that Mattis was asked what the kill-casualty radius of his unsheathed hand was. Mattis’ answer: “As far as you can throw it.”

A devotee of Meditations, by Roman Emperor Marcus Aurelius, Mattis earned a reputation as a “warrior monk” for his cerebral approach to leading troops. He advised Marines shortly before the 2003 invasion of Iraq, “Engage your brain before you engage your weapon.”

When he was later asked by a colleague about how important it is for military officers to read when they are often too busy to do so, Mattis famously explained why he is such a voracious reader – and why officers should always make time to read.

“Thanks to my reading, I have never been caught flat-footed by any situation, never at a loss for how any problem has been addressed (successfully or unsuccessfully) before,” Mattis replied. “It doesn’t give me all the answers, but it lights what is often a dark path ahead.”

He approached leading the Pentagon with the type of stoicism that would make Marcus Aurelius proud.

“I’m not paid for my feelings,” Mattis told reporters in February 2018, “I save those for my girlfriend.”