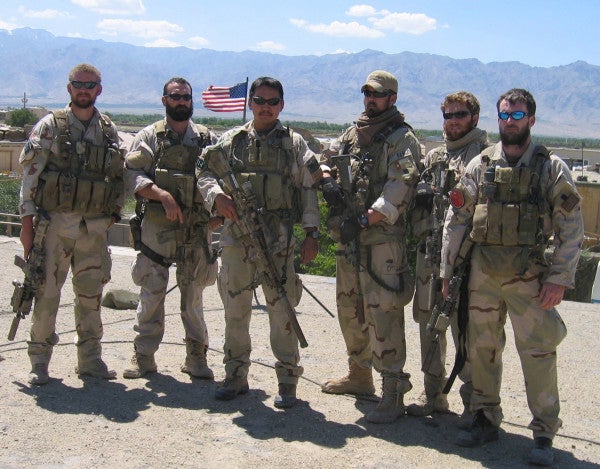 Fifteen years ago, a team of four Navy SEALs fought through what was identified at the time as the deadliest day for U.S. forces since the start of Operation Enduring Freedom.

On June 28, the team was confronted by an overwhelming enemy force, resulting in the death of all but Luttrell, as well as several other special operators whose helicopter was shot down while they were en route to help the embattled team. At the time, it was the greatest single loss of life for Naval Special Warfare since World War II.

Two years after the mission, in October 2007, Lt. Murphy was posthumously awarded the Medal of Honor for his “selfless leadership, courageous actions, and extraordinary devotion to duty” that he displayed during the gunfight.

According to the Navy’s summary of action, the four SEALs were “deep behind enemy lines,” in difficult and rugged terrain in Afghanistan, on a reconnaissance mission scouting Ahmad Shah — a terrorist who was head of a guerrilla group aligned with the Taliban. During the mission, locals spotted the team and reported their position to Taliban fighters.

Soon, the four-man team came under attack and was severely outnumbered, facing over 50 combatants who “launched a well-organized, three-sided attack” on the SEALs, wounding each of them. They were pushed further and further into a ravine, forcing them to attempt to make their way down the side of the mountain.

With the situation only getting worse, Dietz “sought open air to place a distress call back to base,” but was shot in the hand. So Murphy — who was “suffering grave gunshot wounds” — took it upon himself to finish was Dietz had tried to do. The award citation says that Murphy “fought his way into open terrain” to be able to make the call, demonstrating “extreme composure … in the face of almost certain death.”

“This deliberate, heroic act deprived him of cover, exposing him to direct enemy fire,” his award citation says.

He was able to request assistance from the quick reaction force at Bagram Air Base, but while he was on the call, Murphy was shot in the back and dropped the transmitter.

“Murphy picked it back up, completed the call, and continued firing at the enemy who was closing in,” the action summary says. “Severely wounded, Lt. Murphy returned to his cover position with his men and continued the battle.”

Because of Murphy’s transmission, an MH-47 Chinook helicopter, carrying eight other SEALs along with eight Army Night Stalkers, responded to extract the four-man team alongside Army attack helicopters. But, the action summary explains, the “heavy weight” of the attack helicopters led the MH-47 to outrun them, meaning they would be advancing “into an active enemy area in daylight, without their attack support, and without the cover of night.”

They did it anyway, knowing time was of the essence if they were to save the embattled SEAL team. But on its way in, the MH-47 was hit by a rocket-propelled grenade. All 16 men on board were killed.

By the end of the battle, Dietz, Murphy, and Axelson had also been killed, and Luttrell had been “blasted over a ridge” and knocked unconscious. A while later, when he regained consciousness, Luttrell found he had no other option but to crawl down the side of the cliff he was on — despite having three cracked vertebrae, a bullet wound in one leg and shrapnel in both, and suffering from dehydration.

He was “too weak and injured” to make contact with the rescue helicopters that came to find him. He walked almost seven miles, keeping out of the enemy’s grasp for almost a day before he was taken in by locals and given shelter in a village nearby.

Despite repeated demands by the Taliban, the villagers refused to hand over Luttrell. One of the villagers eventually delivered a note from Luttrell to a Marine outpost, leading to “a massive operation” to rescue the SEAL on July 2nd.

“By his undaunted courage, intrepid fighting spirit and inspirational devotion to his men in the face of certain death, Lt. Murphy was able to relay the position of his unit, an act that ultimately led to the rescue of Luttrell and the recovery of the remains of the three who were killed in the battle,” the action summary says.

“The Naval Special Warfare (NSW) community will forever remember June 28, 2005, and the heroic efforts and sacrifices of our special operators. We hold with reverence the ultimate sacrifice that they made while engaged in that fierce firefight on the front lines of the global war on terrorism (GWOT).”