"No way they’re going to be able to navigate that. It’s very dicey. It’s very dangerous, and it’s completely unpredictable." 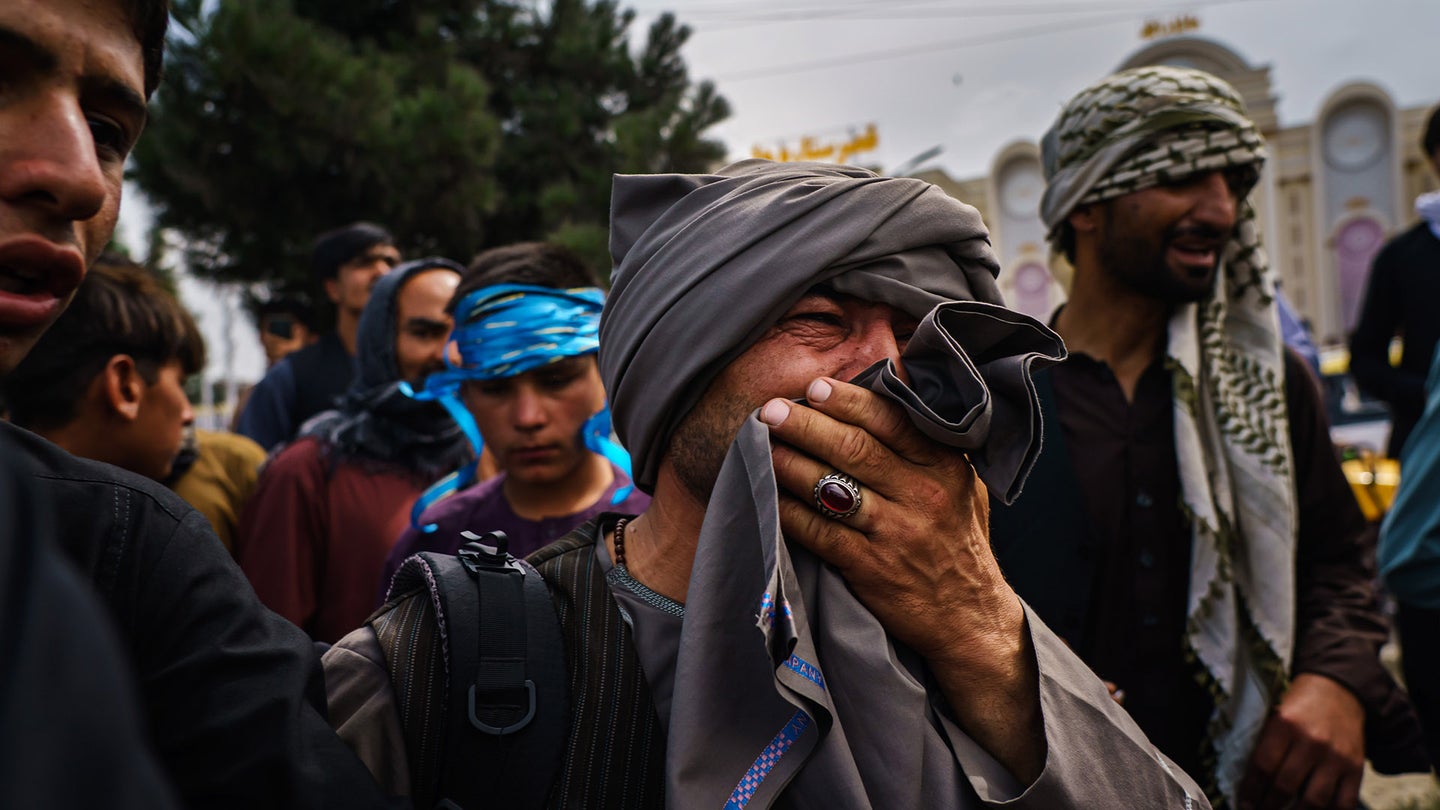 KABUL, AFGHANISTAN -- AUGUST 17, 2021: A man cries as he watches fellow Afghans get wounded after Taliban fighters use guns fire, whips, sticks and sharp objects to maintain crowd control over thousands of Afghans who continue to wait outside the Kabul Airport for a way out, on airport road in Kabul, Afghanistan, Tuesday, Aug. 17, 2021. (MARCUS YAM / LOS ANGELES TIMES).
SHARE

U.S. officials claim the Taliban has offered safe passage to Afghans trying to get out of the country, but a group of Taliban fighters are reportedly preventing almost everyone from entering Kabul’s international airport.

Editor’s note: This article contains disturbing images and accounts depicting the reality of conditions on the ground in Afghanistan. They may be upsetting to readers.

CNN’s Clarissa Ward described the scene outside of the airport on Wednesday as “mayhem,” with Taliban fighters firing in the air to disperse crowds, making it “impossible for an ordinary civilian, even if they have their paperwork” to get a flight out of the country.

“No way they’re running that gauntlet,” Ward said. “No way they’re going to be able to navigate that. It’s very dicey. It’s very dangerous, and it’s completely unpredictable. There’s no order. There’s no coherent system for processing people, separating those with papers from those who don’t have papers. And, honestly, to me it’s a miracle that more people haven’t been very, very seriously hurt.”

Ward described the sound of gunfire as “pretty much constant” as the Taliban pushed people back. As a result, Afghans are sitting less than 200 yards away from the airport with no idea how they are going to get out of the country.

On Tuesday, National Security Advisor Jake Sullivan told reporters that the Taliban have vowed they will provide safe passage of civilians to Kabul’s airport, “and we intend to hold them to that commitment.”

Sullivan did not say exactly how the U.S. government could compel the Taliban to allow Afghans and Americans to reach the airport unharmed.

“I am not going to go into the full panoply of things that we can do, but there are obviously issues related to sanctions, to marshalling international condemnation and isolation, and other steps as well,” Sullivan said at a White House news briefing.

So far, the U.S. government has not provided transportation for either Afghans or Americans trapped in Kabul. Task & Purpose obtained a message from the State Department to one former Afghan interpreter that warned in all capital letters: “The United States cannot ensure safe passage to the Hamid Karzai International Airport.”

The scene Ward described is part of a wider pattern happening in Kabul, and likely elsewhere in Afghanistan. The Taliban shot a former interpreter for the Australian army in the leg on Wednesday as he tried to get on the Australian military’s first evacuation flight, SBS News reported.

Marcus Yam of the Los Angeles Times described an incident on Tuesday when dozens of Taliban fighters herded hundreds of men, women, and children outside of Kabul’s airport and viciously beat and whipped them.

“At least a dozen people were wounded,” wrote Yam, who was whipped in the leg during the carnage. “A woman and child were left covered in blood; a few men in the crowd pulled them across the street to safety, hustling them into a yellow Toyota Corolla taxi that then sped off. An elderly man in a bloodstained sports jacket carried a limp child, whose eyes were open to reveal only the whites.”

Navy Rear Adm. Peter Vasely, the top U.S. commander in Kabul, is talking with the Taliban about the problems Afghans are facing as they try to get to the airport, Pentagon spokesman John Kirby told reporters on Wednesday.

“This is one of the reasons why communication with the Taliban is so important,” Kirby said at a Pentagon news conference. “What I can tell you is we’re not unaware that there has been issues out in town and harassment of individuals. That is one of the reasons why Adm. Vasely is in touch with his counterpart, his Taliban counterpart, to try to make sure that that doesn’t happen and that those who we are trying to evacuate – Special Immigrant Visa applicants, special Afghans at risk – we’re working very hard to make sure that they can get through safely so that they can be properly processed.”

However, the Taliban is not the only obstacle facing Afghans trying to get to safety. Ward interviewed an Afghan man on Wednesday, who said he was unable to get a visa because he needed a letter from his former company’s human resources department that was written in 2021.

The Pentagon is working with the State Department to try to “solve the paperwork problem that we know exists,” said Kirby, who did not elaborate further.