Navy tells SEAL to remove Trident from his book about Cairo, the hero dog alongside him on the Bin Laden raid

Will Chesney, a Navy SEAL who participated in the May 2, 2011 raid that killed Osama Bin Laden, was recently told by the Navy to remove the Navy Special Warfare insignia from cover of his new book, despite the fact that a dozen other novels and memoirs seem to be sporting it as well. 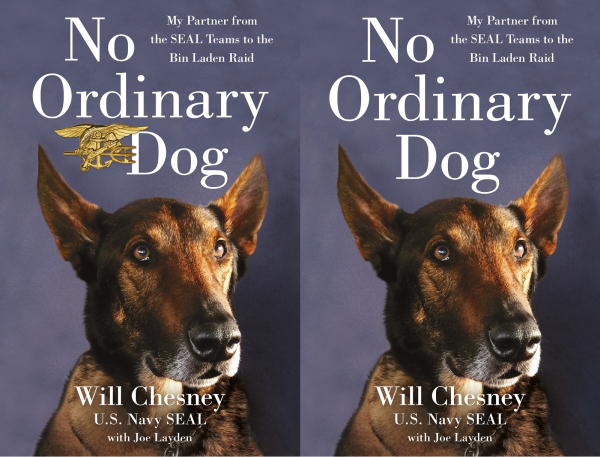 Nine years ago Will Chesney got an unexpected call: He was to grab his dog and head to Virginia, immediately.

What came next were weeks of exhaustive training as the Navy SEAL and his military working dog, Cairo, prepared for one of the most significant special operations missions in history: Operation Neptune Spear. By May 2, 2011 Cairo and Chesney were on the ground in Abbottabad, Pakistan, taking part in the raid that killed Osama Bin Laden.

This year, on April 21, Chesney published his memoir, No Ordinary Dog. Co-authored by Joe Lyndon, the book is framed as a tribute to the operators Chesney served alongside during his 13-year career in the Navy and to Cairo, the Belgian Malinois who joined him on the Bin Laden raid.

But the same day that No Ordinary Dog was released, the Navy sent a letter to the publisher, St. Martin's Press, taking issue with its use of the Navy Special Warfare insignia, also known as a SEAL trident, on the cover, as Coffee or Die first reported on May 1.

A copy of the letter was provided to Task & Purpose by Chesney's business partner, Mark Semos, a former SEAL and a producer and writer with The Reserve Label.

“This
book appears to have the Navy SEALs’ trident insignia on the cover. You may not be aware that
the U.S. Navy has trademark rights in this insignia,” reads the letter. “Accordingly, we request that the trident not be included on the cover of the upcoming book.”

Though the publisher agreed to remove the trident, the request was met with resistance from both Chesney and Semos. Chesney declined to comment for this article, though Semos provided a screenshot of an email that Chesney sent in response to the Navy's letter.

“I myself earned the right to wear the trident after completing BUDs training in class 246, and while my dog Cairo was unable to officially earn a trident, he was shot in the line of duty on an NSW operation while protecting our team,” Chesney wrote in his May 1 email.

“I'm asking to use the insignia in order to honor my dog who was a Navy Military Working Dog and to tell my story, which received DoD approval prior to publication,” Chesney added.

Despite Chesney's request that his book be allowed to keep the trident, the Navy refused to budge. On May 6, Chesney received the following email response from Michael Badagliacca at the Office of Naval Research, which oversees the service's trademarks:

We are aware of your credentials as a SEAL and the heroic efforts of Cairo. The Navy appreciates your service and is supportive of Cairo’s impressive story being told. We recognize that your intentions are honorable, but many bad actors attempt to commercialize on the SEALs’ good name. As you can appreciate, the trident is sacred to the SEALs and for that reason it is policy to limit its use to Navy-sponsored activities. We think Cairo’s story is incredible and will inspire others, even without the trident on the cover. We wish you the best of success with the book.

Prior to publication, Semos told Task & Purpose that the book underwent an “extraordinarily onerous” screening process through the Department of Defense that lasted nearly a year and a half to ensure that nothing made it to print that would jeopardize operational security.

This made the Navy's letter all the more unexpected, especially since it came right as the book was published.

“They waited until our publication date to send that cease and desist — that's troubling to me on a bunch of fronts,” Semos said.

The Navy, for its part, says that they never issued a “cease and desist letter,” but an “educational notice” meant to make the book publisher aware that they were using a trademarked symbol, according to David Smalley, a spokesman for the Office of Naval Research, which oversees the service's trademarks.

“It is important to note that the Navy Trademark and Licensing Office’s correspondence to the publishers was not a cease and desist letter,” Smalley told Task & Purpose. “Rather, it is an educational notice regarding the Navy’s trademark rights. The letter’s intent was to assert the Navy’s trademark rights and educate the publisher that the SEAL Trident is a symbol of respect and integrity and to refrain from using it on book covers for marketing or decorative purposes.”

“The Navy’s Trademark and Licensing Office issues several notice of rights letters per month regarding the use Navy SEAL trident, the words United States Navy, and other trademark violations that it finds or is alerted to,” Smalley continued. “For the most part, companies, publishers and users comply when they receive the educational letters.”

For those behind No Ordinary Dog, part of their frustration is that the symbol has been used on similar works.

“My understanding of trademark enforcement is it has to be consistent across the board,” Semos said. “It doesn't take much to Google search books about Navy SEALs, and a lot of them use the trident.”

Even the most cursory search for “Navy SEAL book” pulls up a dozen such examples:

Of the books referenced above, Smalley told Task & Purpose that they “are examples of why the Navy decided in the fall of 2019 it was time to reach out to many publishers.”

“These books were published before the educational letters were distributed,” he continued. “The Navy has requested that current and future prints of these books do not include the Trident on the cover. We have received confirmation from several publishers consenting and recognizing the integrity of the SEAL trident.”

As for whether changing the cover will have a financial impact, Semos said he was confident “there will be.”

“There's going to be, unquestionably, a loss here, but we can't put a number on it because we just don't know what it will be,” Semos said.

“All these people have seen the book cover with the trident on it, now when they go to a bookstore as the lockdown is eased, or go to Amazon to purchase the book, they're looking at a different book cover,” he continued. “And so in a way, it can lead to a lot of questions: Does the Navy not support this? Does the Navy not support Will? Was there something wrong with Will's service record — which of course there wasn't, he had an exemplary record, and obviously participated in one of the biggest special operations missions in history.”