Turns out the aircraft was on a scheduled training flight ahead of the governor-elect's inauguration. 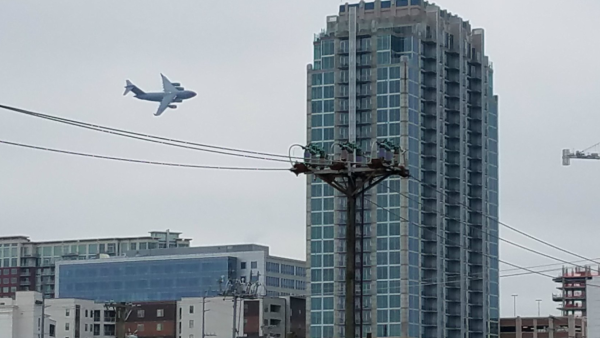 A low-flying C-17 gave Nashville residents a fright on Friday when the aircraft made several unannounced passes over the city's bustling downtown.

For roughly half an hour the plane zipped over buildings scaring the dogshit out of residents in the process, many of whom took to social media, and in some cases picked up the phone and called the cops, to find out what the hell was going on, reports INSIDER.

It turns out the flyover was a scheduled training exercise for Tennessee Governor-elect Bill Lee's inauguration today. There's just one problem: Nobody ever got the word, though they eventually figured it out.

Add to it that the whole thing is a bit irrelevant now because the flyover was canceled due to weather.

Seems like people in Nashville were NOT prepared for a military plane to fly right through downtown. pic.twitter.com/tfHO5i24I1

In a number of videos posted on Twitter, spectators can be heard cursing, gasping, and worrying that the aircraft — which boasts a 170-foot wingspan — might clip the side of a building.

What the hell is this military plane doing this low over Nashville?? @WKRN pic.twitter.com/qcyWLn4Vsn

Fortunately, no accident occurred, though the aircraft reportedly came so close to some buildings that they shook.

Here's a dramatic, and totally not accurate reenactment of what that may have looked like: