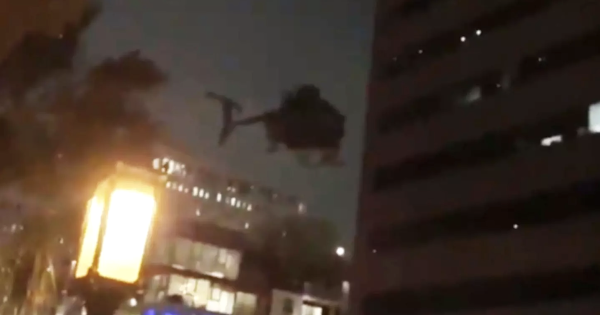 Nothing to cap off your average workday in Los Angeles like having Army helicopters flying low through the streets, am I right?

Despite the rainy conditions late on Feb. 4, two MH-6s flew through downtown L.A. as part of an exercise by the 160th Special Operations Aviation Regiment, The War Zone reported. An MH-60 even landed in the street, loading up a team of special operations forces.

The Los Angeles Police Department announced the training exercises on Monday night, and said they would continue through February 9th.

“The purpose of the training is to enhance soldier skills by operating in various urban environments and settings,” LAPD said in a statement, per NBC News' Andrew Blankstein. “Residents may hear sounds associated with the training, including aircraft and weapon simulations. Citizens in close proximity to the areas where the training will take place will be notified prior to the training,”

Would I at first be nervous if I saw this happening? Absolutely. Do I think it's pretty badass, now that I'm in the loop? Again — absolutely. The folks seemed to have a similar reaction; some were less than pleased.

What the fuck was that!? Were those military helicopters!? Those were too close to us. #LosAngeles #LA pic.twitter.com/MFZe9KEckK

But then there's the guy in this video, yelling “'MERICA!”

WATCH NEXT: An Ultra-Low Flyby In Ukraine