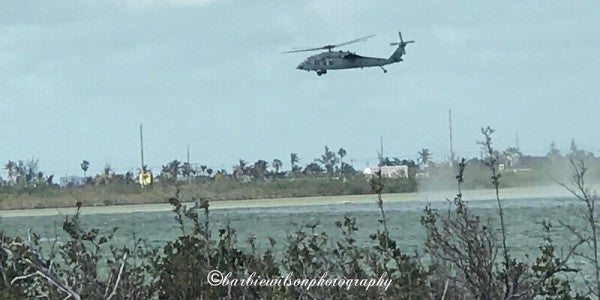 The plane from Strike Fighter Squadron 213 went down about 4:30 p.m. local time, about a mile from the runway, while on final approach to Boca Chica Field at Naval Air Station Key West, Naval Air Force Atlantic announced in a news release.

“Search and rescue crews were notified shortly after the crash where they recovered both the pilot and weapons systems officer from the water approximately one mile east of the runway,” the news release says. “Both were taken by ambulance to Lower Keys Medical Center.”

The Navy just an announced that both aviators who ejected from an F/A-18 earlier day have died. Names will be released after next-of-kin notification. Fair winds and following seas, shipmates.

The crash was first reported by a local photographer, Barbie Wilson, who happened to be on the scene. Wilson, who lives in the area, said she saw the plane explode in midair before crashing.

“I don’t know what kind of jet it was,” Wilson told Task & Purpose. “This thing went a little sideways and then I saw a fireball and then it literally just dropped out of the sky.”

Wilson said she did not see the pilot or pilots eject before the jet came to rest in shallow water. A rescue helicopter dropped two divers at the crash site, but she did not know if they found anyone.

Saw it roll, xplode and go down thats all I know pic.twitter.com/vSshHBUDAO