Just hours before the Dayton International Air Show opened its doors to the viewing public on June 24, a two-seat... 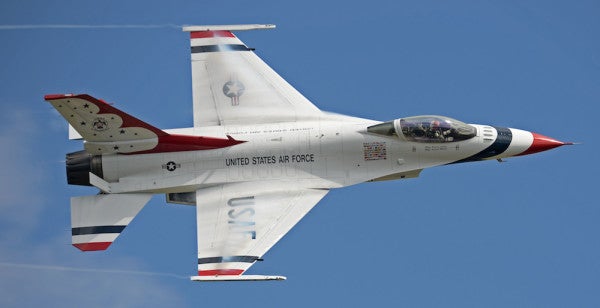 Just hours before the Dayton International Air Show opened its doors to the viewing public on June 24, a two-seat Block 52 F-16D Fighting Falcon taking part in an Air Force Thunderbirds flight demonstration experienced a bizarre crash at the end of its preparation fight, flipping tip-over-tail onto the airfield grass.

Luckily, pilot Capt. Erik Gonsalves and passenger Sgt. Kenneth Cordova only sustained minor injuries in the incident, which occurred while taxiing at Dayton International Airport. But the damage to the aircraft was extensive: According to the War Zone, it took fire and rescue crews hours to remove the duo from the inverted cockpit, literally tearing the aircraft to shreds to extricate them.

A new video published on June 25 appears to show the extent of the damage to the F-16D — and it’s not pretty:

The brief video, uploaded to Facebook by Senior Master Sgt. James M. Williams from Wright-Patterson Air Force Base, shows the wreckage of the aircraft aboard a flatbed truck. It is unclear if the footage was recorded at Dayton International Airport or Wright-Patterson AFB. Williams did not immediately respond to request for comment.

The ruined Fighting Falcon is a sad, miserable sight, but it’s a great contrast to this shot of Gonsalves smiling from his hospital bed, ready to fly another day:

Thanks for all the love and support. I'm doing okay. More to follow, I'm thankful for all our friendships. @AFThunderbirds ? pic.twitter.com/1zzHWXQ7nA