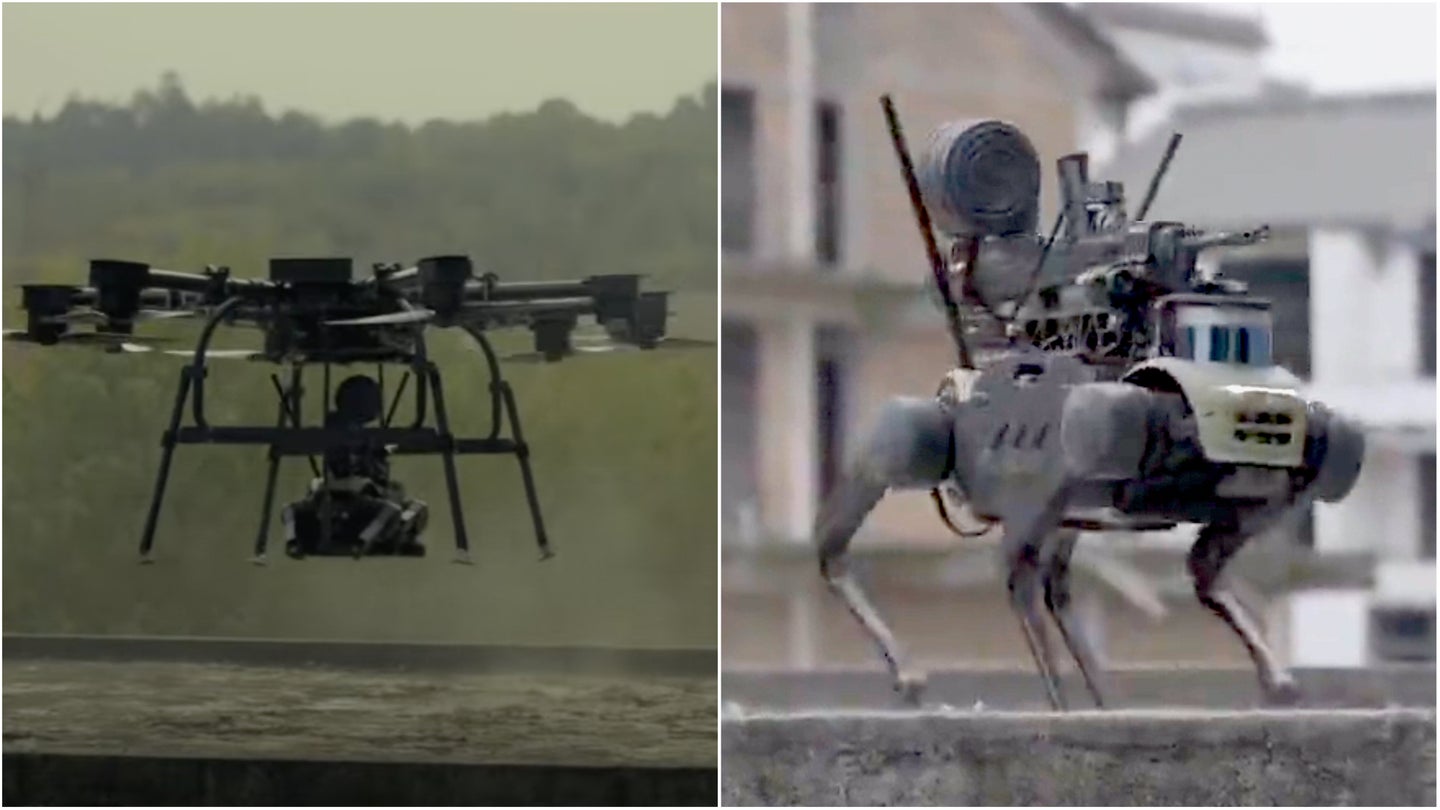 In a future war, death may not arrive by helicopter or tank, but with the gentle whir of electric rotors and the metallic patter of robotic paws.

That’s the inevitable takeaway from a video that recently circulated on Chinese social media that shows a drone deploying a quadrupedal unmanned ground vehicle (Q-UGV) — or “robot dog,” if you’re into the whole brevity thing — armed with a light machine gun onto a rooftop.

The video was shared by a verified Weibo account named “Kestrel Defense Blood-Wing” which appears to be affiliated with the Chinese defense contractor Kestrel Defense.

The footage shows a medium-sized drone hauling a folded-up robot dog on approach to a building in a dense urban area before releasing its robotic payload on the rooftop and flying away.

The robot dog then unfolds itself and begins patrolling the roof armed with what our colleagues at The War Zone identified as a Chinese  5.8x42mm QBB-97 light machine gun strapped to its back.

The footage “is a good illustration of how the future of warfare is not just merely robotic, but hybrid, with a mix of manned and unmanned but also different types of unmanned working together,” said Peter Singer, a strategist at the New America think tank and the author of several books on the future of war.

“We’ve seen that in everything from the transfer of information from drones in the air to unmanned ground vehicles to UGVs that could launch other unmanned systems,” he added. “It’s all about teaming the manned and unmanned, as well as the unmanned and the unmanned together.”

Details regarding the exact systems featured in the new Kestrel Defense video are scant. While unarmed robot dogs laden with sensors and comms equipment have become a relatively new fixture among security forces units in the U.S. military — and, occasionally, alongside foreign combat troops — their armed counterparts are a more recent and terrifying development.

In October 2021, robodog-maker Ghost Robotics and SWORD International teamed up to unveil a robot dog with a 6.5mm Creedmoor rifle mounted on its back on the floor of the Association of the U.S. Army’s annual conference in Washington, D.C. in the first publicly available example of a weapons system formally attached to a Q-UGV.

The following March, Russian-born inventor and tech entrepreneur Alexander Atamanov posted a video to YouTube showing a robot dog operating a fully automatic Russian 9x19mm PP-19-01 “Vityaz” submachine gun on an unidentified shooting range. Then, in August, the Russian military showed off a Chinese-made robot dog (dressed as a ninja, for some reason) with what appeared to be an RPG-26 anti-tank rocket launcher strapped to its back.

While little information is publicly available about Kestrel Defense and its products, the company appears to be pioneering the field of armed robot dogs for the Chinese military. In June, the company published photos of robot dogs with QBZ-95 infantry rifles and smoke grenade launchers on their backs; then, in August, it published a video of one of its robot dogs firing loitering munitions from a mounted launcher.

Despite these well-publicized innovations in the weaponization of Q-UGVs, armed robot dogs are likely far from ready for prime time, according to Samuel Bendett, an expert on unmanned systems at the Center for Naval Analyses.

“We have to remember that at this point, such development is purely experimental as such systems can prove very brittle in actual combat,” Bendett said. “Multiple interference points and vectors — from physical obstacles to communications and other obstacles — complicate the operations of such robotic systems at present. The real test of such aerial-ground duo[s] is under constant fires and under significant EMS interference, which isn’t something we are seeing in such promotional videos.”

The footage of the new Kestrel Defense drone airdrop comes amid a push from robotics companies to prevent both private and public organizations from weaponizing their Q-UGV products, citing concerns over “new risks of harm and serious ethical issues” stemming from so many enterprising weapons makers slapping firearms on robots.

“We pledge that we will not weaponize our advanced-mobility general-purpose robots or the software we develop that enables advanced robotics and we will not support others to do so,” wrote six companies, including industry leader Boston Dynamics, in an open letter earlier this month. “When possible, we will carefully review our customers’ intended applications to avoid potential weaponization.”

That pledge from a small number of companies “is nice, but it isn’t going to change the fact that many many other [companies] are” working on weaponization, according to Singer. Indeed, as Bendett notes, the flashy promos are indicators that advanced nations are taking the concept seriously.”

“That many countries are working on such systems — US, China, Israel, and even Russia — indicates forward-thinking militaries seeking to provide accuracy to their missions while replacing soldiers in most dangerous missions,” Bendett said. “But we are probably many years away from these robotic systems actually working as intended, along with continuous R&D into AI and ML that will eventually enable these robot’s urban operations.”

Here’s hoping these robot dogs are very good boys. Or, at the least, they know how to sit, stay, and heel on command — you know, for humanity’s sake.