A new system being tested by the Air Force will alert authorities to gunshots and deploy robots and drones to intercept. 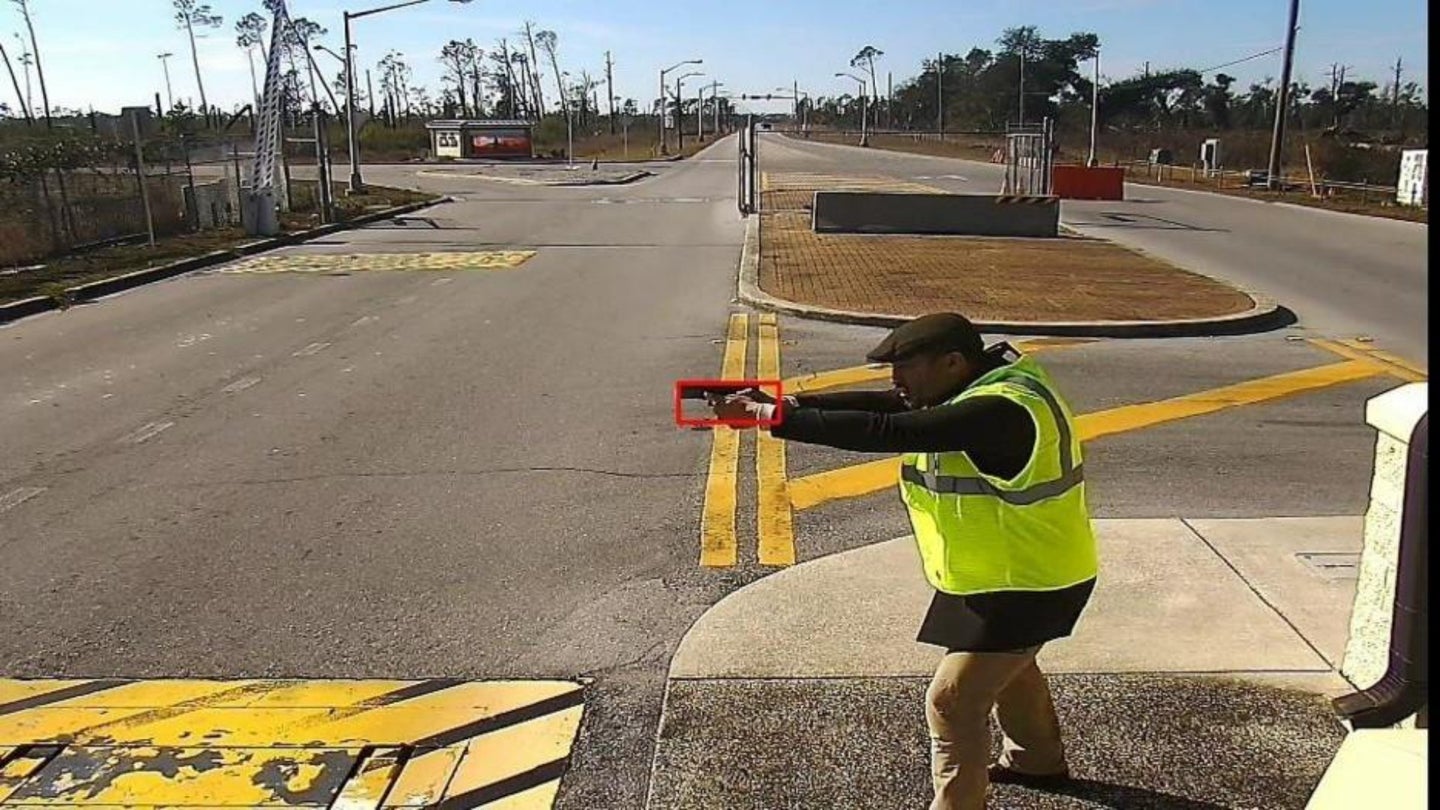 Airmen with large biceps should be careful flexing at Ellsworth Air Force Base, South Dakota: the base is trying out a new A.I.-based gun detection system in an effort to stop active shooters before they can hurt anyone. ZeroEyes, the company that makes Drone-Robot Enabled Active Shooter Deterrence (DRASD), says the new technology will get the ball rolling on a security response to an active shooter far faster than existing systems.

“The end-to-end solution is capable of proactively identifying guns before the first shot is fired by integrating its machine learning software with existing [Internet Protocol] security cameras,” the company wrote in a press release. “This creates a highly affordable means of empowering security decision-makers to radically improve their ability to save lives.”

Here’s how it works: the ZeroEyes software watches the same areas being watched by existing base security cameras. If the A.I. detects someone carrying a gun, it flags the image and sends it to the ZeroEyes Operations Center, which the company says is staffed 24/7, every day of the year by military veterans “who are specially trained to assess the situation accurately,” Rob Huberty, the company’s chief operating officer and co-founder, said in a promotional video.

The A.I.-captured image appears on the ZeroEyes operator’s computer screen with a green box centered on what the software thinks is a gun, the company website explains. The operator zooms in for a closer look to see if the A.I. is right, which he or she can do in under a second, the website claims. If the A.I. is wrong, the operator declares it a false positive. But if it’s right, the operator presses the “dispatch” button, which triggers a smartphone alert sent to local security, staff and police as well as notifies the local 911 call center, all in three to five seconds. Leaving no stone unturned, the ZeroEyes operators then call each party on the alert list to make sure they received the alert, all in under a minute, the company says.

“We’ll even notify our customers when their cameras, power or networks are down,” Huberty said.

One thing that stands out about the Ellsworth system is that in addition to alerting local authorities, ZeroEyes will also trigger the deployment of “robots and/or drones” to intercept, slow down or disorient the shooter with non-lethal strobes and high-pitched sirens until first responders can arrive, the press release said. Though the Ellsworth press release did not provide more specifics on the drones themselves, a separate release on June 9 announced ZeroEyes’ partnership with Asylon Robotics, which develops both four-legged robot dogs and quadcopter drones for security purposes.

Mike Lahiff, CEO of ZeroEyes, said his company planned to outfit the dogs and drones with lights and alarms to distract shooters, “giving first responders time to respond to threats more quickly and safely from the air or on the ground, when every second counts.” The drones’ cameras would also give first responders real time intelligence of the threat and move the ZeroEyes software beyond fixed security cameras. A video accompanying the release said that the drones are controlled by Asylon robotic security operators, who appeared to work from their own operations center.

Of course, bad guys are not the only ones who carry guns on military bases, so how does the A.I. distinguish between a possible active shooter and your average military policeman on patrol? Apparently the A.I. is smarter than you might expect. An Air Force security forces airman (the Air Force equivalent of military police), explained that the A.I. can identify if a firearm is in a slung position, the way law enforcement and security forces airmen normally carry firearms while on shift. But when the gun is unslung, that’s when the alarms go up.

“The AI software can identify weapons such as shotguns, rifles and other weapon models,” said Staff Sgt. Nicholas Murphy, the technology and innovations noncommissioned officer in charge for the 325th Security Forces Squadron, in a press release in March. “The software (detects) 360-degree visuals of various weapon models in a database which then triggers an alarm sent to security forces (who can dispatch responders) to get there as soon as possible in an active shooter situation.”

The 325th is based at Tyndall Air Force Base, Florida, which is also trying out ZeroEyes. The base was the first to implement the software earlier this year. As of March, the software was still in the testing and evaluation stage, but the system seems to have passed in good shape: ZeroEyes announced on June 7 that the Air Force had awarded the company a $750,000 research and development contract for deployment at Ellsworth. The South Dakota base currently hosts B-1 bombers and MQ-9 drone ground control stations, but it will soon host the B-21 Raider, the Air Force’s next-generation stealth bomber, which is due to take its first flight in 2023.

Under the contract, Ellsworth will test DRASD for 15 months, with the goal of making sure the gun-detecting software is a good fit for Air Force needs.

The system already has plenty of fans among public school districts, police departments, and private companies such as FedEx, Subaru and Verizon. ZeroEyes also has a SAFETY Act designation from the U.S. Department of Homeland Security, which means the department thinks the technology is promising enough that it deserves liability protection so it can be developed more easily.

If recent headlines are any indicator, the country could use more tools to prevent active shooters from pulling the trigger in the future. More than 250 mass shootings have occurred in the U.S. in 2022 so far, according to The Washington Post, including one at an elementary school in Uvalde, Texas that killed 19 children and two teachers; and one at a supermarket in Buffalo, New York that killed 10 people and injured three others. On Tuesday, service members at Joint Base San Antonio – Lackland, Texas, went on lockdown after base officials tweeted an alert about gunshots heard near the base, though the lockdown was later lifted without incident. Those threats don’t appear to be going anywhere in the immediate future. If the Ellsworth test goes well, ZeroEyes might become very popular at more military bases.

“We look forward to working closely with the Air Force, expanding to the Air Force market and potentially scaling our solution to the broader Department of Defense,” Lahiff said.