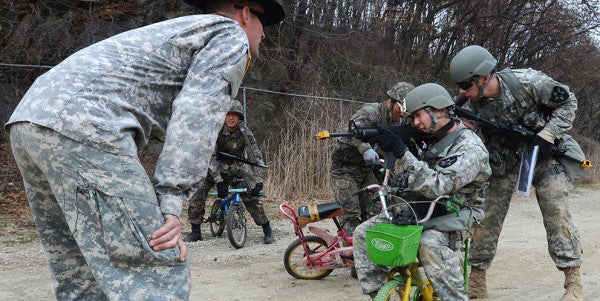 On April 1, at 2:54 p.m., a status update on the military culture page U.S Army W.T.F! moments alerted readers that shots had been fired on the Army's Fort Hood, near Killeen, Texas. Within five minutes, the update had been commented on more than 30 times, and as time went on posts continued to pour in as users wondered whether or not their lives were in danger. Over the next hour, the post was shared more than 400 times, and commented on extensively by members and visitors to the page — which has an audience of more than 466,000.

The post was also was updated, with the first update coming a minute later, warning that it was not a joke.

Just over an hour later, the page administrator announced that a suspect was apprehended trying to enter the base and that all was secure.

But there was never an active shooter on Fort Hood that day. According to a press release from Fort Hood public affairs posted at 3:48 p.m., April 1, base “officials received a call at approximately 1:30 p.m. notifying the installation that a soldier allegedly issued a verbal threat. Directorate of Emergency Services officials took appropriate measures to secure the post and currently have a suspect in custody.”

So, how exactly did an alleged verbal threat transform into a report of a base shooting? And what exactly do we as members of the audience, as veterans and military personnel, and in my case, a veteran and a journalist, make of something like this?

To find out, Task & Purpose reached out to the U.S Army W.T.F! moments page administrator who posted about the alleged shooting, for answers. Identifying himself as Jose De la Cruz, he agreed to talk so long as we only communicated via Facebook Messenger. His unwillingness to speak over the phone was somewhat disconcerting as it illustrated a lack of accountability on the part of the page's administrators, who seem willing to broadcast information to nearly half a million Facebook users, but are then resistant to speaking about this dissemination process.

Cruz said he is 25 years old and living in Oklahoma. He said he never served in the military, though his father did, and he moved all over the place, which he said helped him prepare for his position at U.S Army W.T.F! moments.

He said his role with the group, which has recently evolved, “is to take lead for the 'big' stories when they arise and then continue to scour the net/friends for potential stories.”

Here's a person who just sounded an alarm for actual danger on a military installation; accuracy and timeliness are paramount, and after botching a report about an active shooter on a military base, he claims that he can't agree to a phone interview because of a speech impediment, and now wanted to push it back, not a day or two, but nearly two months.

Eventually we settled on continuing the interview via Facebook Messenger.

“When I posted the active shooter, I knew there was an identified subject and there was a target,” De la Cruz told me. “But since that wasn't a guarantee, I didn't put in the location. I would say it's kind of like a tornado warning, since we have a lot of them here in Oklahoma…either conditions exist or its actually happening.”

De la Cruz said he and his fellow page administrators spoke with a contact they had on the base where the alleged attacked was taking place. The source for De la Cruz's posts was a friend of one of the page's administrators, stationed at Fort Hood. Later that day the group uploaded an email to U.S Army W.T.F! moments that they claim was sent to inform them of the threat on base.

“We contacted a person who works inside the department of emergency services who read us the BOLO that was put out, but asked us not to post it because of it sensitive information,” said De la Cruz, referring to a warning statement, or BOLO, meaning: be on the lookout. “For situations like yesterday, every admin that is on will stop whatever they were working on and only work the event.”

The email that led to the Facebook post does not mention an active shooter or shots fired, nor is it dated. It may very well be from the incident in question, but it's unclear making this another W.T.F moment on a growing list of them.

Task & Purpose contacted Christopher J. Haug, the chief of media relations for Fort Hood Public Affairs, to verify the email, but the response was less than illuminating: “Fort Hood officials can neither confirm nor deny the validity of the details contained in that memo.”

When asked to explain the U.S Army W.T.F! moments editorial process, and what safeguards the group had in place, De la Cruz responded:

“Every admin has various contacts that they use and then it will turn into a collaborative to make sure nothing falls through or as best as we can not put inaccurate information out,” said De la Cruz. “But being human, if we make an error, like we initially did yesterday, we publish the admission of error and correct it.”

The idea that information — regardless of accuracy — is meant to be shared immediately, is very alarming. What if a reader, after seeing the status update from U.S Army W.T.F! moments had overreacted? What if he or she was armed and was unexpectedly surprised or caught off guard, and panicked? It could have been much, much worse.

Here is the essential problem with this process: De la Cruz and his cohorts seem to be operating under the assumption that simply posting a redaction or a clarification somehow undoes their earlier mistake. As if all the inaccurate information just vanishes from the Internet.

And what about all of those Facebook users who saw the first post, and then never came back to read the updated information? For them, this could be just “another shooting at Fort Hood,” and a potentially divisive stigma will have been unjustly reinforced.

It may be tempting to write this off as little more than a mistake by a Facebook group known for funny videos and gag posts; after all, the majority of posts involve soldiers, or other service members doing stupid things — like turning each other into wrecking balls so they can knock over a stack boxes. Who would really go to a page like this for news updates, especially about something as pressing as a shooting?

Lots of people, and it shouldn't be surprising.

U.S Army W.T.F! moments has a sizeable following, which gives the page a solid reach when it comes to distributing information, or misinformation, albeit unintentionally. The post went up one day before the one-year anniversary of a mass shooting that left three dead and 12 wounded aboard Fort Hood, and it's likely that tensions were high across the base. It was also April Fool's Day, and presumably many of the men and women following the post simply couldn't believe that a page run for, and by members of their community would deliberately play such a cruel trick.

We live in the day and age of near instantaneous news, and this has given rise to the much-touted idea of the “citizen journalist” — anyone with a smartphone and good reception can report breaking news. It's a genuinely noble notion, and in truth those at U.S Army W.T.F! moments were trying to do the right thing, except they failed miserably, and there's a key reason: They're not journalists, nor are they law enforcement officials or authority figures of any kind.

Yet they have a considerable following, and that cannot be overstated because the size of their audience means that anything U.S Army W.T.F! moments posts can spread to its nearly half-million followers in just a few minutes. This is a very powerful tool, and a possibly dangerous position to be in. Unlike news or other professions that implement fact-checking process to verify information, Facebook groups like U.S. Army W.T.F! moments don't have the same quality control measures in place — and normally it's not a problem, until they're ringing alarm bells about shooters who aren't there.

Creators of online content need to place less emphasis on speed, and more on accuracy and compassion. As your audience grows and your ability to distribute information farther and faster increases, so does your obligation to get it right. The internet shouldn't be the Wild West of information where no rules apply. When you put out a bogus story, you can't control the consequences.

This particular WTF moment is just indicative of a larger problem in online news, culture, and media, where stories or posts are literally uploaded every second. We're beginning to lose perspective, both creators and consumers of content, and starting to accept half measures and cop-out apologies when it comes to the dissemination of information. The old adage “quality over quantity” has been replaced by “speed above all else.” If we want to see a change, then both readers and writers of online news need to make concerted efforts to call each other on our bullshit, and call out excuses when offered in lieu of earnest apologies.