The National Republican Senatorial Committee tweeted March 8 that wounded veteran Rep. Tammy Duckworth has a “sad record of not... 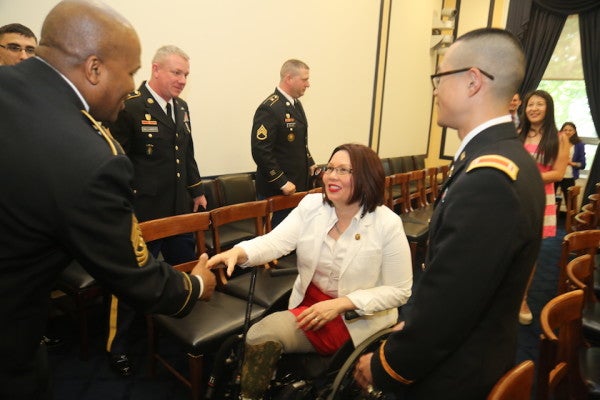 The National Republican Senatorial Committee tweeted March 8 that wounded veteran Rep. Tammy Duckworth has a “sad record of not standing up for our veterans.”

Duckworth, a Democrat from Illinois, served in the Iraq War as an Army helicopter pilot, lost both legs, and suffered damage to her right arm in combat.

Prior to a career in politics, Duckworth served from 2006 to early 2009 on the Illinois Department of Veterans Affairs. For her advocacy work on behalf of veterans, she won the Iraq and Afghanistan War Veterans of America Veterans Leadership Award in 2007.

Brandon Friedman, who previously worked under Duckworth as director of digital engagement within the Office of Public Affairs when both were at the VA, told Task & Purpose, “Here's the reality: Since losing both legs in combat, Tammy has dedicated her life to standing up for veterans — on her camouflaged and star-spangled prosthetic legs.”

In 2013, she assumed the role as congresswoman of Illinois’ 8th district. Outspoken on veterans issues in the House, she serves on the House Armed Services Committee.

Duckworth also announced March 30, 2015 that she would be running for an Illinois Senate seat against Republican incumbent Mark Kirk in 2016.

“It's hard to even know where to begin with a statement like this, though I'm not shocked it would come from Mark Kirk's folks in the GOP,” Friedman said.

This is not the first time Duckworth has been called out by the Republican Party for having a lackluster record on veterans issues. In 2015, The Washington Free Beacon reported that an audit of the Illinois Department of Veterans Affairs shows veterans were underserved due to mismanagement under her tenure.

The tweet, which was posted in connection to an article on Department of Veterans Affairs scandal, was quickly taken down, but not before several people screenshotted photos of it.