In mid-January, Mary Claire Caine returned to her car after shopping in Wilmington, North Carolina to find a note affixed... 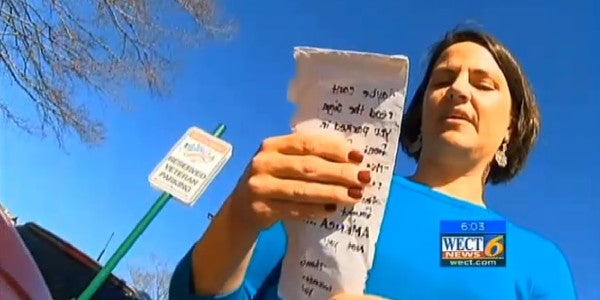 In mid-January, Mary Claire Caine returned to her car after shopping in Wilmington, North Carolina to find a note affixed to the window.

“Maybe can't read the sign you parked in front of,” the note read. “This space is reserved for those who fought for America….not you. Thanks, Wounded Vet.”

Caine had parked in a parking spot marked “Veteran Parking.”

Here’s the plot twist literally everyone saw coming — she’s a real-life veteran. Caine served in the Air Force on the flight line supporting F-117 Nighthawks, and deployed to Kuwait.

Some guy saw her get out of her car, and assumed she couldn’t be a veteran because she was a woman.

“For a split second I thought, 'Am I a worthy enough veteran to park in this spot?' And, then I got very angry at myself for even considering that,” Caine told WECT News in North Carolina.

America’s veteran population, numbering more than 20 million, is extraordinarily diverse in every sociological aspect, including race, economic class, and gender. In fact, roughly 2 million veterans today are women, according to Department of Veterans Affairs figures.

In today’s military, Women have fought and died in Iraq and Afghanistan. Presently, every branch of the military is actively exploring how to fully integrate women into combat arms roles, by order of the secretary of defense. That this faceless stranger in the parking lot in Wilmington, North Carolina, failed to consider this is astounding.

“They have this image of what today's American veteran is and honestly if you've served in the United States military, you know that veterans come in all shapes and sizes,” Caine said of the man. “I question whether the person who left the note was fully aware of that.”

Caine is rightfully fired up over the incident, and said that beyond her, it’s an affront to every woman who has worn the uniform.

“I want them to know they owe me and every other female service member who's fighting now and who's fought in the past, an apology for jumping to conclusions,” Caine said.