Footage Of Attack On Decorated Marine Released By Police 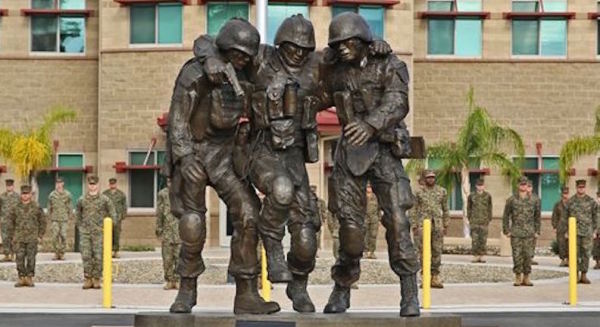 The attack, which took place on the night of Feb. 12 at a McDonald’s in Northwest D.C., left Marquez with a head injury, as the video reveals his assailants hitting him with an unknown object.

The group then proceeded to take everything from his pockets including his wallet, from which they took his USAA credit card and made purchases totaling $115.

Police have not made any arrests in the case so far. The footage has led them to believe that there are three people of interest involved in the attack.

The Daily Caller first reported that Marquez called the attack a racially motivated crime. According the police report, one of the suspects allegedly hit Marquez with a gun after calling him a racist.

Marquez told Marine Corps Times that he came to after being hit and took a cab home where he met with police. He was then treated at George Washington Hospital, and will receive additional treatment at a Veterans Affairs hospital.

Marquez is known best as one of the two men who helped carry then-1st Sgt. Bradley Kasal out of Fallujah’s infamous “Hell House.” This led to a nationally recognizable photograph that was turned into a memorial statue, and his being awarded the Bronze Star.

View the footage of the attack here.

Correction: An earlier version of this article said The Daily Caller reported that the attack was racially motivated. It has been changed to reflect that Marquez reported the crime as having a racial element. (2/22/2016; 12:48 pm).