As Marines and soldiers redeploy to Afghanistan to provide support to coalition allies and Afghan National Security Forces, there’s one... 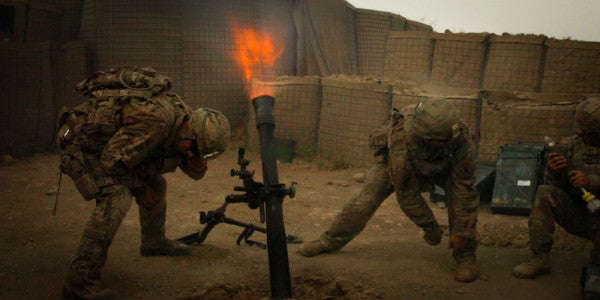 As Marines and soldiers redeploy to Afghanistan to provide support to coalition allies and Afghan National Security Forces, there’s one weapon system that’s remained a stalwart workhorse in the ongoing fight against the Taliban: The M252 mortar system.

The 81mm mortar is a crew-served medium-weight artillery system, capable of delivering accurate rounds — once the gun crew walks them in on target — at considerable distances and without line of sight.

Simple in design and devastatingly efficient, the M252 is comprised of a mortar tube, a mount, baseplate, and sight. Under ideal circumstances, the muzzle-loaded M252 is crewed by a five man team: a squad leader, a gunner, an assistant gunner, and two ammunition bearers, but intrepid mortarmen can, and have made due with less. A mainstay of Army and Marine infantry units, the M252 is capable of lobbing high explosive, white phosphorous, or illumination rounds at targets up to three miles away.

Related: This Is The Devastating Piece of Artillery Leading The Ground Fight Against ISIS »

Mortar teams, often operating out of a forward position, coordinate fire with ground troops and observers, but they’re not particularly accurate weapon systems — that’s not really why they exist. Think of the 81mm mortar and its siblings, the 60mm and 120mm mortars, as modern-day catapults capable of slinging a high volume of “screw you and die” at an enemy position, and inching closer to their target with each subsequent round.

Unlike artillery, such as the M777 howitzer, the M252 is controlled at the battalion or company level, which during the surge years, meant it was available and ready to go when it was needed — rather than when the brass back at Leatherneck, Bagram or Kandahar deemed it appropriate. Typically, a section of two or more guns and their crews work in concert, firing adjustment rounds at an enemy position, until zeroing in on the target and then firing for effect. Once that order is given, the gun crews can lob up to 15 rounds in a minute, per gun, or 30 rounds in two minutes. As Popular Mechanics reports, the plunging angle of fire makes the weapon’s HE rounds, which boast a 40-meter blast diameter, ideal for hitting targets in cover, or trenches — like the many wadis and irrigation canals that crisscross Afghanistan’s farmland.

Though not really lightweight, the 120-pound 81mm mortar system can be transported when it’s broken down. The individual pieces — which weigh between 27 and 35-pounds — aren’t what you’d consider easy to tote; you also still need to lug your ammunition downrange, and that includes enough 10-pound high-explosive rounds to get the job done. But getting an indirect fire weapon far enough forward to assist ground troops heading into a hot area is probably worth the back pain.

Compared to its World War II 81mm forebears, the M252 remains relatively unchanged in terms of design, though the old standby is in for some new upgrades. The Advanced Capability Extended Range Mortar, a new round developed by the Office of Naval Research, takes aim at a shortcoming facing not just the M252, but all mortars: accuracy.

According to a June 2016 report by Popular Mechanics, the ACERM is an advanced round that outfits a mortar with wings, control fins, GPS navigation, an enhanced payload, and lasers, yes, lasers. Essentially, this transforms a dumb (but devastating round) into a smart bomb. The wings add increased range — making it capable of hitting targets up to six miles out — thanks to aerodynamics (see “wings”). Additionally, the combination of control fins, GPS navigation, and laser guidance means the first round fired has a much higher probability of hitting its target — which is good, because those under mortar fire have a tendency to take cover after the first round hits.

The M252 and the infantrymen behind them seem to be doing a pretty good job of laying down the hurt without all the fancy new tech.